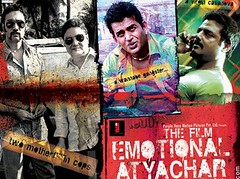 It's so exciting when you are watching a film and you start thinking of the specific people who you want to recommend it to. And it's such an anti-climax when you get out of the theater and the enthusiasm to spread the word has somewhat dithered. I don't really know if I can blame the makers for the climax because there aren't too many other ways the film could have gone.

But, while Emotional Atyachar lasts, you are promised sharp dialogue from the world of sleaze. Thus you have been warned to the crass language and innuendoes. But the humor is quirky and comes and goes really quick, so you have to be attentive and of course get past the profanity. There are random little things which you might not remember later, but if reminded they are sure to bring a smile.

Emotional Atyachar has an absolutely fantastic start. The spooky feel and range of characters builds and maintains intrigue. Right from the wannabe, Gujrati businessman to the muse played by Kalki Koechlin, each character is eccentric in one way or the other and it works. Yep! Even the stereotype works, because of the everyday yet witty dialogue. However, the film suffers the way any 90-minute film with so many characters would.

Looks like an inexperienced person had some say in what parts of the story stays out of the film. In a film which otherwise had a decent flow, Emotional Atyachar has a few effects without any apparent causes. For example, why the businessman is refused funding or how does a character free himself after being tied down. The amateur editing also shows in the fact that the 90 minutes run-time is split into 60 minutes pre-interval and 30 minutes post-interval. It makes the film seem longer than it actually is. Which also means any longer and the film would have suffered. So, the editing was necessary but not necessarily done well.

Despite that there is enough in the film to warrant a trip to the theater if dark, pulp-type fiction is your kind of entertainment.

Thumbs up, by Blessy Chettiar, DNA : ...The sharp and quick editing and style of story-telling are compelling... full review

Thumbs up, filmi cafe : ...Akshay Shere has done a wonderful job of holding the complicated screenplay together and keeping it light hearted... full review

Thumbs up, by Aakash Barvalia, Gomolo.in : ...To direct this type of movie, without any continuity goof ups is a very tough job, and this needs to appreciate from direct dilse... full review

So-So, by Nikhil Kumar, Apun Ka Choice : ...Ranvir is doubtlessly one of the most natural actors around.... full review

So-So, by Baradwaj Rangan, Blogical Conclusion, The New Sunday Express : ...the bastard child of two twentieth-century aphorisms – Jean-Luc Godard’s puckish pronouncement that all films must have a beginning, a middle and an end (just not necessarily in that order), and John Lennon’s more sentimental observation that life is what happens while you’re busy making other plans... full review

So-So, by Bobby Sing, Bobby Talks Cinema.com : ...certainly is much more enjoyable than many recent worthless films delivered by some renowned names in the Industry... full review

So-So, by Taran Adarsh, Bollywood Hungama : ...One has to be attentive, sorry, very attentive while watching THE FILM EMOTIONAL ATYACHAR... full review

So-So, by Vikram Phukan, Film Impressions : ...Ms Koechlin isn’t initially allowed to expand upon her high-kicking majorette-like persona from Dev.D but towards the end, she manages to lace her under-written part with a vicious tanginess as the film hurtles headlong towards a climax.... full review

So-So, by Vivek Bhatia, Filmfare : ...production values that steep so low, that at times the sound and visuals seem unbearably amateur. ... full review

So-So, by Pankaj Sabnani, Glamsham.com : ...But the humour falls flat and is puerile rather than dark. ... full review

Thumbs down, by Deepa Garimella, fullhyd.com : ...The comedy varies with the actor who's put in charge of the lines.... full review

Thumbs down, by Komal Nahta, koimoi : ...things start becoming comprehensible in the second half as it emerges that the unifying factor is the bag of money.... full review

Thumbs down, by Sonia Chopra, Sify Movies : ...Vinay Pathak and Ranvir Shorey are talents in themselves and explosive as a duo. But their chemistry and individual talents are underutilised and, for the most part, we see them mouthing dull dialogue, passing off as smart-alecky.... full review

Thumbs down, by Janhvi Patel, StarBoxOffice : ...Though the narrative is non-linear for the sake of it, the characters and their tales are inter-woven interestingly.... full review

It's a circular story which runs through a businessman who is dumped by a potential investor who wants to invest in a casino instead the owner of which owes a local don money who has hired two corrupt policemen to extort the money one of whom likes the casino-owner's girlfriend who is trying her best to dupe everyone around for the money which is actually robbed by a wannabe goon and two of his dysfunctional assistants whose van is spotted by the businessman. And there is a bag full of money in the middle of all this.

@Makarand oh wow...that's a surprise. I wouldn't have thought that you'll like the film. I'd recommend Ek Chalis Ki Last Local and Manorama Six Feet under if you haven't seen them yet.

@Makarand it's girly and pink, so i'd say good call.