The Fakir Of Venice

A unique story told rather plainly. I’m not asking for drama but would have liked a bit of a punch in the story-telling. Nevertheless, can be seen as a news item turned into a film owing to seemingly effortless performances by both lead actors.

The Fakir Of Venice - Preview

So, the film was supposedly made almost 10 years ago and was supposed to be Farhan Akhtar’s acting debut. But hey, “better late than never,” is what the trailer makes me say.

Annu Kapoor’s act reminded me of the quirkiness from Vicky Donor, which is an awesome memory. Farhan Akhtar, of course, is his charming self in whatever role he plays. That might be a good thing or a bad one, so far though it is engaging entertainment.

The major draw for me though is the crazy story, and it is from the life of a real person! The trailer of The Fakir of Venice has the feel of one of those smaller films that get me excited and do not disappoint — looking forward to the First of February 2019, then!

The Fakir of Venice is that weird story you’d read on the 7th page of your newspaper. One where someone gets conned by a smart-alec who pulls off the most ridiculous con. The production values of the film, the performances all carry a slice-of-life kind of a feel. A slice of someone’s life. Because this is too bizarre to happen in an ordinary person’s life – whether they are from a city or a village, whether they are rich or poor.

You forget you are watching a film because of the performances.

It is refreshing to watch a story about a completely random turn of events changing a person’s life completely. That this film was made 10 years ago and yet manages to stay fresh in that aspect is quite commendable.

It is unfortunate however that the narration is quite flat. There are no hooks, no moments that would stay with you. This also means there are no gimmicks, which is great. But that makes the film drag at times, even at just 100 minutes.

And even so, Farhan Akhtar and Annu Kapoor create a space where you are completely interested in whatever it is they are doing or whatever story they are telling you. Within the first 10-15 minutes, you see them behave as you would expect a person in that situation to and you forget you are watching a film.

Until the voice-over interrupts rather unnecessarily. Why?! 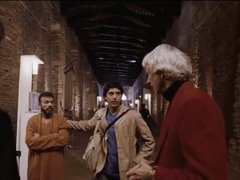 Such decisions always make me wonder. The same team that created an ambience where the actors have engaged you make a decision to rudely interrupt that experience with a narrator. Even if it is the actor’s own voice narrating his story.

That gives you a chance to think about other choices made by the tellers. Why did they not explore the relationship between the resourceful film production executive and the fakir further? Why did they only skirt by some philosophies about power, human nature, behaviour, people’s definition of art, or even its own comment about all art being fake, or all art being as truthful as a person’s perception, etc.? Why did they shy away from exploring at least some of these themes further?

A slice of someone’s life. Because this is too bizarre to happen in an ordinary person’s life

Yet, the performances that seem effortless and the dull, dreary texture of the film make the film feel very real. That is quite an achievement considering that the story is an offbeat and almost freakish one about a construction labourer who can stay buried under sand for 3+ hours, who is hired by a production executive as an art gallery exhibit.

Thumbs up, by Vishal Verma, Glamsham.com : ...THE FAKIR OF VENICE may not have been able to exploit the universal appeal it had in its concept – the debate on how fake and real art can be with an insight on humanity, religion and spirituality. Anand Surapur sticks to an interesting interplay of characters to say a story that can mostly appeal to the Indian niche audience and not the global aficionados worldwide. Still THE FAKIR OF VENICE which could have been the debut of Farhan Akhtar as an actor and Anand Surapur as a filmmaker is steady and assured in its believe which does opens the gate for a debate.... full review

So-So, by Bobby Sing, Bobby Talks Cinema.com : ...In short, this is yet another project that seems to have been made eyeing the foreign festival market in particular, presenting India as the land of mystics, magicians and snake charmers (as usual) along with an exciting plot. However the end-result is nothing great and the film is exactly like something you might partially enjoy watching online without spending any extra money, but visiting the theater for such dated, average and unexciting offering is strictly not suggested.... full review

So-So, Filmi Beat : ...Sattar's drinking habits make him an unsuitable candidate for this journey but Adi is confident that they can pull it off. And so, the two travel to the floating city to con the European art world. Will their deceit be caught? The rest of the film holds the answer.... full review

So-So, by Johnson Thomas, Free Press Journal : ...The dialogues try to insert some much needed spirituality and meaning into the drama but it all seems like mumbo-jumbo given that none of the characters have any real feel for a deeper entrenchment. Director Anand Surapur fails to imbue his effort with a stronger vein of emotion. There’s neither humour nor pathos to keep the viewer engaged. The bland indifference in tone and the needless padding for cinema length, plays spoilsport here. Even the rather short 87 min runtime comes across as inordinately long drawn, here!... full review

So-So, by Umesh Punwani, koimoi : ...All said and done, The Fakir Of Venice is a story aimlessly roaming on the streets of Venice. Good performances never make a good movie and this movie is yet another proof of it. Wait for the digital release, watch it on a lazy Sunday and you’ll not regret as much.... full review

So-So, Outlook India : ...Despite the film being is the cans for nearly a decade, the film does not appear dated. Overall, this film is naÃ¯ve and heart-warming and will clearly appeal to cinephiles.... full review

So-So, by Urvi parikh, Rediff : ...Kamal Sidhu, who plays Adi's girlfriend, has very little to do and disappears after a few scenes. Despite shooting in picturesque Venice, Surapur is unable to capture the city's charm. Venice remains a backdrop and that is heartbreaking.... full review

So-So, by Subhash k Jha, Sify Movies : ...The Fakir Of Venice builds its narrative pyramid on a solid foundation of exploitative tourism. But the plot falls apart in the third act when a good-hearted local Italian woman (Valentina Carnelutti) intervenes to rescue the Fakir (with a tragic unconvincing secret) and even falls in love with him.... full review

So-So, by Reza Noorani, Times of India : ...Farhan Akhtar as the typical suburban, upper-middle class Mumbaikar delivers a credible performance in the film that marked his debut a decade ago. Annu Kapoor as the strange yet head-strong labourer delivers a pitch-perfect performance and is the reason for most of the jokes in the film.... full review

Thumbs down, Bollywood Hungama : ...On the whole, THE FAKIR OF VENICE boasts of an interesting plot and bravura performance by Annu Kapoor. But the flawed execution, festival-style narrative and most importantly the delayed release will go against the film heavily.... full review

Thumbs down, by Jyoti Shrma bawa, Hindustan Times : ...Just like all those nuggets of information, The Fakir of Venice is out of sync with today. That, however, is not its biggest fault – it is the film’s inability to forge any kind of bond with viewers. Its tales of hard luck, its charming yet dissolute protagonist, its ambitious scope – you are strangely untouched by everything that happens on screen. The film has ambition, what it absolutely lacks is ability to realise it.... full review

Thumbs down, by Kunal Guha, Mumbai Mirror : ...The Fakir of Venice surely has an intriguing title that may Read more at: https://mumbaimirror.indiatimes.com/entertainment/movie-review/the-fakir-of-venice-movie-review-farhan-akhtar-isnt-a-disappointment-in-what-was-supposed-to-be-his-debut-film/articleshow/67879302.cms?utm_source=contentofinterest&utm_medium=text&utm_campaign=cppst... full review

Thumbs down, by Saibal Chatterjee, NDTV : ...The Fakir Of Venice is listless fare. The only point of interest in the film is the prospect of watching a younger Farhan Akhtar playing a man whose ways border on the somewhat distasteful. But like a lot else in this film, the self-serving characteristics that define Adi do not emerge clearly enough in his exchanges with the simple-minded Sattar... full review

Thumbs down, by Priyanka Sinha Jha, News18.com : ...Unfortunately, The Fakir of Venice like its chief attraction- Sattar the Fakir, draws attention to what it has in store but fails to live up to the expectations it sets up.... full review

Thumbs down, by Manisha Lakhe, Now Running.com : ...Adi Contractor, a man who can procure anything is given a task to find a fakir who can bury himself in the sand head first and bring him to Venice, Italy as art installation. He persuades Sattar to play the part. What could have been a fabulous satire on the world of art ends up being tedious because it is directed badly, except for a masterclass in acting by Annu Kapoor... full review

Thumbs down, by Nandini Ramnath, Scroll.in : ...A wasted character, who should have been along on the Venice adventure but isn’t, is Kamal Sidhu. The veejay and model – a fixture on television in the 1990s – has a brief role as Adi’s ex-girlfriend. The movie was made for the generation that has fond memories of Sidhu’s kinky curls and Canadian accent, but unlike her, it hasn’t aged well. The decade between its completion and its release shows in every frame. Mumbai and Venice are visibly less crowded than they now are and the actors are younger and more energetic, but the movie’s art world con made little sense then and even less sense in 2019.... full review