Paresh Mokashi’s first film Harishchandrachi Factory depicted Dadasaheb Phalke’s struggle to make India's first motion picture, Raja Harishchandra. It was a fascinating story presented in a disappointing manner. His second venture – Elizabeth Ekadashi, portrays a family’s struggle to overcome mounting financial woes. Their efforts to survive and lead a normal life could’ve made a more engaging, heartwarming film. Instead, the director presents you a plot that is predictable at every juncture.

The film is about a family that gets into an unexpected financial problem. A widowed mother, the sole breadwinner of the family, strives hard to get themselves out of this dilemma. Her kids, however, decide to take matters in their own hands and support their mother. We all know the story and what will happen next and thereafter. Yet, you will be surprised to see how beautifully Madhugandha Kulkarni’s story is woven around Elizabeth – a cycle, and Ashadhi Ekadashi (an auspicious day). That’s why, no matter how conventional the narrative is, I don't worry about it as long as the treatment is heeded to.

Now, this cycle called Elizabeth was gifted to Dnyanesh (a lead character) by his late father. As does every human being, this family and above all Dnyanesh finds an emotional bond with it. Mokashi captures this affection so wonderfully that you’ll yearn for more. Alas, his weakest directional side spoils the whole show. Over-explanatory dialogues and over-exaggerated performances were the biggest bummer for Harishchandrachi Factory. And you get to see that imprint in Elizabeth Ekadashi as well. It’s really hard to understand why Indian filmmakers question our sensibilities rather than challenging them. Why can’t they let us feel the story rather than describing it to us through dialogue? 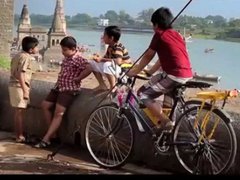 Mokashi once again failed to take advantage of his talented, charming cast. Their unnecessarily staged, not-so-natural performances make you think if the director really wanted it that way for this film or he prefers it this way by default. The characters’ struggle is evident throughout the film. You feel nothing about them though. As a result, you don’t desperately want the protagonist to succeed in his endeavors. Because somewhere you know he might win anyway. Mokashi tries to throw in a few surprises, but he is very late. His predictable screenplay has already done the job.

At 90 minutes, it might look like the film is short and crisp. But a sharper edit could’ve surely helped to disguise its glitches. Mokashi had an opportunity to show a cinematic climax that would’ve left audiences speechless. It’s a shame that he chose an absolutely passé one. Above all, it is so casually directed that it makes me wonder if he was the same guy whose last film was India's official entry to Academy Awards.

Amol Gole’s cinematography isn't ground-breaking, but it is not something I've seen in Marathi films in recent times. Each scene is lit so brilliantly that it adds to the intensity of the narrative. Very well done!

This story could’ve actually taken place anywhere, but the director knows its soul very well. No wonder the production set in the backdrop of Pandharpur looks so authentic. The visual beauty of Elizabeth Ekadashi is such that you may not mind overlooking its shortcomings.

The film revolves around a family struggling with its financial troubles, and Dnyanesh’s (a central character) beloved cycle – Elizabeth.

Pooor review of a excellent picture.

YDK has given this movie a Want to Watch(Must watch). YDK has posted 1 comments and has rated 1 movies. See YDK's page for more details.