Needlessly eccentric and stupid. This is an Avdhoot Gupte film. What else do you expect?

Avadhoot Gupte must be a relieved man now. After all, Ek Tara is out in theatres after a year-long battle with the censors. This reason is enough to pep up the filmmaker in him momentarily, but not the audience in you. If he continues to bring films he is notorious for making, you’ll be doomed to disappointment time and again. His latest film is indeed an epic of sorts. After all, when was the last time Gupte’s film left you in the middle of complexity, stupidity and often nowhere?

Gupte’s debut feature, Zenda, was surely a brave take on a political feud between two cousins. His subsequent venture, Morya, delicately portrayed various issues surrounding Ganesh pandals in Bombay. While both the films act purposefully, they had their flaws and dullness. Never mind what happened to his raunchy love story Jai Maharashtra Dhaba, Bhatinda. Just like any other Avadhoot Gupte film, Ek Tara too has an extremely intense premise. But unlike any other Avadhoot Gupte film, this one dies from the first scene and appears futile throughout.

Ek Tara (a star) deals with the rise and fall of a singer, similar to Imtiaz Ali’s Rockstar. Co-writers Gupte and Sachin Darekar this time choose non-linear narrative (Ali’s distinctive style) to keep you engaged. Sadly, the storytelling is so vague that you get bored too quickly and you often compare it with the Rockstar. Well; Rockstar itself was far from perfect, nonetheless this comparison reaches to a point where you feel totally disconnected with the on-screen drama. Not only does Ek Tara lack the magnitude of Ali’s vision, but it also miserably fails in gratifying you. 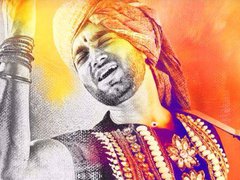 The biggest dilemma the film endures is the absence of motivation in its writing, which eventually leads to irksome execution. Consider this, the folk singer aka Mauli comes to Bombay to enter a music reality show. Odds are against him. A mean-looking channel head – who possibly has nothing else to do – lends him a hand. And he wins the competition despite his absurd style. He becomes an overnight success. This innocent guy suddenly turns into an eccentric, rampant and careless character for no apparent reason. One thing leads to another and all hell breaks loose. But why and how?

If Ek Tara’s tagline is anything to go by, it is supposed to be a journey of a star. But where is that journey of his rise or may be even fall? The director might argue saying the character’s journey lies in between. However, his hastily-presented rise barely explains anything. Neither do you find enough justification for his fall, which begins with a silly set of events.Forced comedy and badly written dialogues add to your misery.

Santosh Juvekar is a versatile actor. Yet, his poorly-shaped character sometimes comes across as whiny and a rowdy at other times. You feel nothing about his misery or glory. This makes the film lose the battle halfway.

Considering the storyline, Ek Tara had every scope of becoming a musical extravaganza. The music is undoubtedly good, but it falls short of intensifying Mauli’s character or the situations he is stuck in. The not-so-exceptional camerawork doesn’t help the film either.

Apart from a thing or two, this film proves to be one big cliché.

Parental guidance: - Violence: No brutal violence as such. - Language: One or two abuses hurled. But nothing serious. - Nudity & Sexual content: One sex scene, while one with foreplay. But no nudity. - Concept: A singer’s struggles with fame and alcoholism. - General Look and Feel: Nothing musical about it.