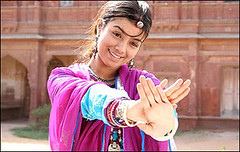 …and for the unemotional types– it is a good story, it is well-narrated. It is dark in there, nobody will see the tears, so it can’t dent your self-esteem!

Dor unveils one emotion after the other – intimacy, loneliness, grief, hope, resignation, oppression, guilt, greed, contempt, liberation and of course love. Yes, most of the story is heartbreaking but the narration is beautifully executed and has enough light moments to keep your interest alive. This tale is about two women from diverse backgrounds having common aspirations – but while one has the courage and confidence to make her own choices, the other is resigned to her fate.

The spectacular locations and magnificent cinematography alone warrant a trip to the cinema hall. Ayesha Takia has uncovered a new dimension to her talent by bringing out the complexity of her character by a moving performance. Though Gul Panag’s dialogue delivery lacks depth and she has yet to master the complete range of expressions, she does look promising. Their make-up (or lack thereof) leaves you speechless. It actually defines and contributes to the characters. In their first shots you can immediately point out that Ayesha is the lively-yet-timid kind and Gul is the strong-willed one.

While the focus of the first half hour is to build the storyline, the simple dialogues get dull. And enter Shreyas Talpade! He literally brings life to the screen every time he is on it. The credit goes to Nagesh Kukunoor for bringing out the best in the trio. He has, in fact, pulled off some scenes without any background music. And hey, one more movie without any lip-synching!

The other artists are just about mediocre, including Nagesh. Looks like he will need a co-director to direct him. Or may be it is the character inconsistency. It is not fair when a character unwarrantedly becomes malicious without warning. Also it is disappointing when a movie of this caliber has a nasty character change tune just because she is “influenced” by one dialogue that was said to her.

Someone, some day has to come up with a better climax, or at least a new way of showing, "I have to get to the train station, or all hell will break loose". Nagesh has taken the first step by hushing the dialogue, but it is still too dramatic and long-drawn compared to the rest of the movie.

Thumbs up, by Naresh Kumar Deoshi, Apun Ka Choice : ...‘Dor’ too is a film on the empowerment of the weak and the oppressed.... full review

Thumbs up, by Prema K., Bollyvista.com : ...this one is surely bound to pick up by word of mouth!... full review

Thumbs up, by Subhash K Jha, Glamsham.com : ...When it comes to portraying a forlorn yet undefeated sisterhood it stands tall and stately right up there with Deepa Mehta's WATER.... full review

Thumbs up, by Nikhat Kazmi, Times of India : ...Here, we’re saluting the New Wave of New Age creativity which is completely homegrown and borrows nothing from nowhere.... full review

Thumbs down, by Rashmi Bansal, J.A.M : ...the story is 'different' but... It's somehow unconvincing.... full review

Want to Watch, by Dustin : Altdorf

Yay! Thumbs Up, by Hindilyrics4u.co.in : Dor unveils one emotion after the other – intimacy, loneliness, grief, hope, resignation, oppression

Yay! Thumbs Up, by Hindilyrics4u.co.un : Someone, some day has to come up with a better climax, or at least a new way of showing, "I have to

So-So, by Enjoylyrics.com : Their make-up (or lack thereof) leaves you speechless. It actually defines and contributes to the ch

So-So, by Tamillyrics.co.in : Someone, some day has to come up with a better climax, or at least a new way of showing, "I have to

[...] Blues was just about average and Iqbal was a regular story presented well. Teen Deewarein and Dor(though copies) were certainly worth writing home about. Bombay to Bangkok however is one of those [...]