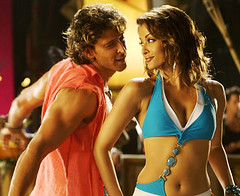 I admit - I am restricted by my rating scale. A theatre screening Dhoom 2 is not where you want to be if you are looking for a slick plot, well-defined characters or quality acting. But, if you are an action-movie-buff and enjoy watching good-looking people, it is certainly worth a trip to the cinema halls. So, if you must, watch it on the big screen.

The cinematography is spectacular, makes you really want to visit all the locations. There are some awesome creative action sequences. But they are sketchy, not detailed. Explanations for who got where and how, in at least three of these sequences, are deemed unnecessary. Some sub-plots are outright silly and some outright unnecessary. The foot-tapping numbers are a treat for the eye, especially "Dil laga na". However, the dances for "Dhoom again" and the credits feel more like a high-level aerobics class than choreography. Remember the genre of movie you are watching, the songs don't need to have any link to the story.

A good action movie "has" to be a thriller first (vice-versa is not necessary). Romance, comedy, melodrama come later. A few smartly done action scenes stringed by some well choreographed songs are not good enough. Especially if, in the time between, you are going to have an overdose of Ekta Kapoor's soap opera style drama - two-second slow motion shots repeated thrice from different angles - not acceptable. Each of the five main characters have dramatic entries and a couple of them get the honour twice - annoying. Glaring product placements and a few scenes that looked like they belonged to the trailer of the movie - test your patience.

Looks like more effort went into the layers of make-up on Hrithik Roshan and Aishwarya Rai than on Abhishek Bachchan and Uday Chopra's dialogue delivery. Hrithik and Aishwarya have done the best that could be done with their intense scenes. The rest of the movie Hrithik falls from high places and Aishwarya catwalks. The tanned Brazilian look suits Hrithik. Aishwarya's fresh look doesn't make her look fresh, she actually looks tired.

Story-wise, Abhishek and Uday start right from where they stopped in Dhoom. Abhishek doesn't need to pull his buttons off to look stylish. While the over-acting settles down after their first fifteen minutes of screen time, they don't look in their element. We have seen much better from both of them. Uday serves well as comic relief and so does Bipasha Basu as eye-candy. What exactly is their function in the plot is beyond me. Did the casting director just say, "We can't have John in this movie, so let's at least have Bipasha."? Watch out for Bipasha's excellent voice modulation, though.

To me, this is action for the sake of action. Even though it is done well, the lack of attention to detail is just too obvious.

Thumbs up, by Taran Adarsh, IndiaFM : ...it's not a path-breaking/inventive story, but what takes the film to dizzy heights is the sequence of events that unravel at a feverish pace.... full review

So-So, by Naresh Kumar Deoshi, Apun Ka Choice : ...Story is not of as much importance to this movie as individual sequences revolving around robberies.... full review

So-So, by Dominic Ferrao, indiatimes : ...If you're looking for depth, you're definitely in shallow waters here.... full review

So-So, by Vijay Venkataramanan, Planet Bollywood : ...the script and its treatment also suffer from a few loopholes that are almost intolerable even for a straight up masala film... full review