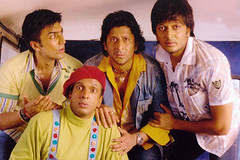 Quite a few funny scenes are strung together with wannabe funny scenes. Anyways, 20 minutes of hard laughter guaranteed in those two+ hours.

Consistency - that is what Dhamaal lacks. A few hold-my-stomach-and-laugh situations are sewn together with the regular loud, slapping-around slapstick. And in all of this, the story writers have been kind enough to worry about my well-being, literally begging my gray cells to take a break.

Some of the gags were sadly derived from jokes that I first heard when I was ten, and have been deleting as e-mail forwards for the last ten years. On the other hand though, caricatures of some of the side-side-characters were outright hilarious and acted out really well too.

You have to give them credit for creating an atmosphere of general interest throughout the movie. Within the first fifteen minutes you know that no matter what the lead characters plan, they are going to fall flat on their face (not literally, thank goodness!) But, it is the manner in which they fall that is pretty creative at most times. Unfortunately, the second half sees you playing catch-up with the five characters and what they are up to. The structure of the story itself becomes such that no amount of editing could create a flow in the narration.

The performances were a mix of the good, the bad and the ugly too. Riteish Deshmukh and Javed Jaffrey added nuances to their characters with their comic timing. Sanjay Dutt and Ashish Chowdhary looked plain and disinterested. One doesn't expect any less from Asrani in a slapstick - the screaming is written off as soon as you know his name in the starcast. Here is the shocker - Arshad Warsi takes his cue from Asrani - how heart-breaking is that!

Did anyone notice - no female lead! Ain't that great!? We all know how they could have easily been misused in a movie of this genre. No women also usually make the songs pretty much boring. The plain-as-ever lyrics and the lackluster music don't help. Not to mention the ridiculous choreography and the resultant indifference with which the cast executed it. What a waste of Javed Jaffrey! The background music did make certain situations funnier. But then, it got a bit much and annoying when it was used for every single movement of any character or object.

There certainly are a few very good laughs packed in the two hours - about twenty minutes worth. But is that good enough to forgive the tolerable, miscellaneous comedy? On a lazy Sunday afternoon, on DVD with a remote control in hand - yes.

Thumbs up, by Nikhil Kumar, Apun Ka Choice : ...The funniest of the lot is Javed Jaffrey, who, with his imbecilic humour, brings the house down... full review

Thumbs up, B4U TV : ...Hats off to the director, for delivering a comic caper without a female character.... full review

Thumbs up, by Rachel Fernandes, Bollywood Mantra : ...The film is brilliantly funny in the first half and manages to mostly keep up the pace in the second half too.... full review

Thumbs up, by Fatema H Kagalwala, Business of Cinema : ...With all that surprising hilarity the ending comes as a bit of a downer, especially the looseness with which it is handled... full review

Thumbs up, by Aprajita Anil, Express India : ...the witty one-liners and the apt comic timings go on to create a the real ‘dhamaal’.... full review

Thumbs up, by Martin D'Souza, Glamsham.com : ...he comedy is not over-the-top and performances from the actors not loud... full review

Thumbs up, by Rajeev Masand, IBN Live : ...Dhamaal works primarily because it's a cleverly written film that moves briskly from one gag to another... full review

Thumbs up, by Taran Adarsh, IndiaFM : ...the film works in totality and that's what matters at the end of the day.... full review

Thumbs up, by Praveen Lance Fernandes, indiatimes : ...It’s not trying hard to make you laugh, it makes you laugh hard.... full review

Thumbs up, by Amit Kaundinya, J.A.M : ...The music of Dhamaal too is a huge disappointment.... full review

Thumbs up, by Hanumant Bhansali, Radio Sargam : ...While the first half sets the rhythm for a laugh riot, its the second half which tends to go overboard with its scenes innovatively ripped from old Hollywood comedies... full review

Thumbs up, by Syed Firdaus Ashraf, Rediff : ... Editor Sanjay Sankla should have been better with the scissors.... full review

Thumbs up, by Nikhat Kazmi, Times of India : ... Don’t go looking for too much sense and you might just enjoy this celebration of nonsense... full review

So-So, Bollyvista.com : ...Speaking about the technical aspect of this film...would simply mean running down at least half a dozen of his crew, so that part is better skipped!... full review

So-So, by Satyajit, SmasHits.com : ...However, my eleven year old son comments on the introduction of Javed Jaffery's character. "Daddy, this scene is borrowed from Mr. Beans."... full review

Thumbs down, by Oz, Desi Train : ...The writers of this movie need to stop writing and first learn the spelling of comedy - it’s C O M E D Y… and not some weird K A M E D I or any other spelling that numerology may have come up with... full review

Thumbs down, by Vaibhav Wankhede, M TV : ...DHAMAAL has it's moments but on the whole it's juvenile and relies too much on farcical comedy.... full review

Thumbs down, by Anupama Chopra, NDTV : ...Dhamaal is an attempt at a brain dead comedy in which a nonsensical plot is merely the framework for a series of unconnected gags.... full review

Yay! Thumbs Up, by nohemi jastremski : 90

Four good-for-nothings get together to earn some quick buck. Soon enough they are caught in a trap of their own making by a cop. As the situation would have it, the five of them now have a common goal. What they need to do to achieve this goal is what the rest of the movie is all about.