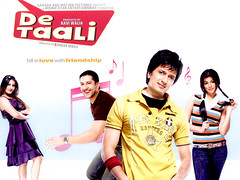 A 2.5 hour long movie. With about an hour's worth of smiles, laughs and hard-core laughter filled in. All because of fresh dialogue and awesome comic timing. You have to be willing to tolerate the many out of place songs and the "sheeeeesh" climax though.

Of course, the theme of friends having fun together is hardly new or "different". But if the gags are intentionally funny, fresh or presented with freshness, devoid of toilet humor, and fairly non-adult, I'm in.

Doesn't mean that De Taali doesn't have such quips or has a water-tight script. Hardly! Its just that there are "other" really funny situations and jokes too. Also, at most times, the humor is situation driven rather than a situation being forced in to accommodate the lines. Another round of applause for the writer because he actually made the girls relevant and funny in the comedy genre. If only they could have sewn it together into a coherent plot.

Anyway, the thing about laughing out loud and so hard-n-long that the neighbor gives you a long stare is that you begin to let go your requirements of "good cinema". First you suspend your disbelief, then you put your brain to the proverbial rest for a couple of hours, then you give in.

Give in to the silliness of it all. Give in to the eccentric side characters and their comic relief sub-plots. It doesn't happen to me too often, but when it does even a couple of those hearty laughs make the movie worth it. However the completely haywire last half hour and the abrupt, casual and ridiculous climax is absolutely unforgivable. Also references to a particular support group are in bad taste and don't go with the otherwise sensitive tone of the movie.

Ritesh Deshmukh who plays a-new-plan-a-minute Paresh Gurudev is as good with his comic timing as ever. He actually looks slimmer and sleeker than Ayesha Takia playing the loving, caring Amrita. But being on the "chubby" side with almost constantly braided hair makes her character more adorable, more girl-next-door, more "identifiable with" type. Its nice to see a female lead not oozing her sexuality on us.

Aftab Shivdasani is a pleasant surprise. He is the affluent Abhishek who falls in true love with every other girl he meets. The man actually has the potential to make you smile! In order to bring out contrast between Amrita and Kartika's mysterious character, Rimi Sen is given a tanned, sexy look. She is a revelation too. It is amazing how the women in De Taali show that all they need is a reasonably well written character.

I actually liked the fact that we were not entertained to a whole lot of back-story of all the characters. Only that much was revealed about their background as was necessary to move the plot forward. But, this has its own drawbacks. Whenever a particular plot point is disclosed, your mind travels back to when the relevant piece of information was told to you first, and in a way you feel manipulated.

I know, it sounds like I'm asking for just the right amount of information that "I" want. But doesn't the art lie in making the movie so engaging that these thoughts do not come to my mind while I'm watching it? Overall though, I enjoyed being with the here-and-now of the characters. Especially considering that a possible alternative would be a voiceover reading out each character's resume to acquaint us with them.

Yet, I'm sure the movie could've been liked by many more if it had been a good 30 minutes shorter. And though the foot-tapping numbers have decent lyrics and are set to some cool choreography, they are still out of place. Any day, I would prefer fewer songs to a 2 hour+ movie.

Thumbs up, by Harshita Kohli, indya.com : ...Especially his scenes when he falls hopelessly in love with his girlfriends is hilarious... full review

Thumbs up, Movie Talkies : ...The performances are great and for a change all the lead actors seem to be in their element.... full review

Thumbs up, by Swati R Chaudhary, Rediff : ...Riteish is lovable as the impish Paglu. Watch out for the scene when he takes potshots at Ram Gopal Varma Ki Aag.... full review

So-So, by Rajeev Masand, IBN Live : ...However the film meanders mindlessly in its second half, digressing from the basic premise... full review

So-So, by Siuranjana Nandi, M TV : ...it's probably the same boring dal chawal you've grown up eating – but you know that it never goes out of style.... full review

So-So, by Sonia Chopra, Sify Movies : ...The humour in the film is omnipresent and not loud and crass like other comedies of late.... full review

So-So, by Lasapriya Sundaram, Times Now : ...De Taali is let down first & foremost by a weak script. However, it is saved by the performances... full review

Thumbs down, by Nikhil Kumar, Apun Ka Choice : ...‘De Taali’ has fine performances from the leading cast, who, at moments, even rise above the mediocre script to hold a viewer’s interest.... full review

Thumbs down, by Baradwaj Rangan, Blogical Conclusion, The New Sunday Express : ...De Taali is a sprawling, shambling, and rather strange mess that gets going, most unexpectedly, with a few sharply shaped observations on how friendships evolve over time.... full review

Thumbs down, by Taran Adarsh, IndiaFM : ...E. Niwas doesn't get in right this time.... full review

Thumbs down, by Gaurav Malani, indiatimes : ...The film seems to be shot and edited in patches and the continuity lapses clearly show... full review

Thumbs down, by Mayank Shekhar, NDTV : ...Everything merely goes berserk only in the latter half, really.... full review

Thumbs down, by Hanumant Bhansali, Radio Sargam : ...De Taali lacks the punch, the fun, the pace, the dialogues and most importantly the script... full review

Thumbs down, by Nikhat Kazmi, Times of India : ...The film gets too long and repetitive, even though it has its funny moments... full review

Paresh (Ritesh Deshmukh), Abhishek (Aftab Shivdasani) and Amrita (Ayesha Takia) are real good friends who have not a worry on their mind. The lovable, cozy equation is in danger of changing with changing circumstances.

A 2.5 hour long movie. With about an hour's worth of smiles, laughs and hard-core laughter filled in. All because of fresh dialogue and awesome comic timing. You have to be willing to tolerate the many out of place songs and the "sheeeeesh" climax t...

[...] Taali, and yet she feels that it is a tad longer than she would like.  She finds it is filled with “smiles, laughs and hard-core laughter” but rates it as a “wait for the video”.  It seems like one of those “total time [...]

Fine review...the movie was okay..screwed up in the end with an overdose of characters. By the way...Maari Teetri song was good.as mentioned in my review..it was the only time, where the characters looked grown-up. It was seriously a movie for 7-12 year olds.

read my review on de taali at http://bollywoodtrends.blogspot.com

Nice detailed review. Leaving aside the asinine climax, the movie was good. Ayesh Takia is just brilliant (I love her ;-)). Riteish is getting more and more confident in the comedy genre now.