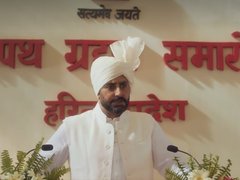 Thumbs up, by Subhash k Jha, Bolly Spice : ...Dasvi is a well-intended tale of absolute power corrupting absolutely and the ultimate redemption. My favourite moment in the film shows Gangaram touching the jail superintendent Jyoti’s feet after sitting his examination. I won’t reveal what she gets as guru-dakshina. But there is a lot to be said about the kursi and a power-hungry politician when he sets his mind to it.... full review

Thumbs up, by Madhuri V, Filmi Beat : ...Macha Macha Re' crooned by Mika Singh makes for a foot-tapping listen. The rest of the tracks, 'Ghani Trip', 'Thaan Liya' and 'Nakhralo' are forgettable. Ganga Ram Chaudhary and Bimala Devi quip, "Thoda uchaa bolo" to each other when the political power lies in their respective hands. However, in Dasvi, Abhishek Bachchan and his team let their work do all the talking and pass with flying colours.... full review

Thumbs up, by Rohit Bhatnagar, Free Press Journal : ...Dasvi’ is entertaining and all about winning the battle with perseverance. The film might be a one-time watch, but how Tushar slyly dives into our nation’s shallow political and judicial system is surely something to watch out for.... full review

So-So, by Urmimala Banerjee, Bollywood Life : ...Abhishek Bachchan and Yami Gautam are the only redeeming factors of Dasvi. The film only has a run-time of close to 130 minutes, which is great given the dearth of content. The lack of comic punches pull down Dasvi by several notches and you feel terrible as Abhishek Bachchan's natural flair in that department is one of the best in the business.... full review

So-So, by Deepa Gahlot, Deepa Gahlot : ...The actors look like they are enjoying their interactions, so even with its missed opportunities, Dasvi (which should correctly be spelt Dasvin) has a warm vibe that may miss the Munnabhai level by miles, but makes for mildly amusing home viewing.... full review

So-So, by Monika Rawal Kukreja, Hindustan Times : ...Dasvi had a strong subject at hand, to focus on the importance of education, especially for our politicians, but in never really translates and remains limited to the silly treatment of its characters.... full review

So-So, by Grace Cyril, india today : ...Dasvi promised to be a social comedy but the jokes were so 90s. The humour is repetitive and Abhishek saying “mere liver me pain hai” while pointing at his heart didn't make us laugh. The IAS officer, who acts as the CM's personal secretary, does sit-ups and cleans cow dung. Most comic punches fall flat and fail to leave a mark. Gangaram also gets so lost in the textbooks of history that he imagines himself meeting the likes of Mahatma Gandhi... full review

So-So, India West : ...Coming to Yami Gautam as the super-strict police inspector, despite delivering a competent performance, she does not have the persona to play such a character she seems to be a misfit in the film, and the makers of the film are solely to be blamed for it.... full review

So-So, by Shubhra Gupta, indian express : ...Abhishek Bachchan is a perfect match for the kind of character he is playing. It’s a pity that the material never quite knows whether it is an exaggerated parody or a sharp comedy with realistic overtones.... full review

So-So, by GAUTAMAN BHASKARAN, News18.com : ...One would be tempted to give Dasvi a little concession, because it is a spoof, although it could have been more evenly tempered, and paid greater care to performances. Bachchan is far better than what we have seen of him in earlier works. Yami Gautam, however, is still to come anywhere near her style and substance of her debut outing, Vicky Donor. However, Kaur is splendid, transforming from a meek housewife to a haughty politician, who quickly learns the ropes of the game and understands how the system can be twisted for personal gains.... full review

So-So, by Avinash Lohana, Pinkvilla : ...Overall, when you see the film it is evident that the makers wanted to strike the right balance between conveying a message and entertaining the audience, but it ends up being more preachy than anything else.... full review

So-So, by Sukanya Varma, Rediff : ...Some better writing and Dasvi would be too.... full review

So-So, by Renuka Vyavahare, Times of India : ...Abhishek Bachchan tries to get into Bachchan Sr’s 70’s space by giving his character an OTT appeal. Strangely, he is way better when he is at his subdued best. He drops the act and comes into his own after a while and that’s when the film holds you momentarily. Nimrat Kaur is perfect as Vimladevi and Yami Gautam Dhar’s choice of characters of late is worth admiring. With every role, she’s ensuring she moves into uncharted waters.... full review

Thumbs down, by Rahul Desai, Film Companion : ...When a film is bad, the veneer of entertainment cracks and reveals a pattern of jokes without a punchline. When a film lacks identity, you also start to notice the misguided masculinity seeping through its veins. Forget accepting Dasvi for what it is, I not only failed to empathize with its protagonist but also failed to fathom how it so readily turns a strong police-woman into a subservient teacher and a housewife into a villain for wanting to defeat her terrible husband. It’s not entirely the film’s fault, though. Indian politics is such a sexist and broken ecosystem that a make-believe story about... full review

Thumbs down, by Sameer Ahire, Movie Talkies : ...What makes this exam difficult for Dasvi is the director's ordinary vision of a high-scope storyline. Naturally, he can't be blamed for the writers' mistakes, but his storytelling wasn't all that great in the first place. You don't see any reason why those spoofy scenes are scheduled after some really good ones. Was that historical spoof made for KG students or what? And what was the outcome? Even the board members of SSC/CBSE would know no answer to that. Whatever exiguous scenes there are, I mean those studying techniques of Chaudhary sahab and his dialoguebaazi on Indian politics, are indeed enjoyable. Apart from that, there is nothing like a study material for cine viewers. Overall, it's a skippable flick, and it's good that it came on OTT.... full review

Thumbs down, by All News 'Saibal Chatterjee, NDTV : ...Dasvi flunks the test because it walks into the examination hall without the necessary wherewithal. The principal characters - the politician, his wife, the policewoman and the CM's personal secretary - are all half-baked characters whose past is lost in a haze. The actors are reduced to fighting a lost battle.... full review

Thumbs down, by Anuj Kumar, The Hindu : ...Once again, Abhishek is earnest and eager to experiment, but has been tasked with bringing life to a cardboard crying for attention. He has worked on the lingo but hasn’t chewed it well enough to make the diction feel natural. The ever-reliable Chaddha shows how to do it. Abhishek also suffers because of the stagy atmosphere. Jalota employs the pace and techniques of Comedy Circus to paper over the cracks in writing, but it doesn’t work. Nimrat and Yami are competent performers who also suffer because of under-written parts.... full review

Thumbs down, by Stutee Ghosh, The Quint : ...Manu Rishi Chadha, Chittaranjan Tripathy, Arun Kushwaha try to make the most of what they have to offer, but Dasvi never recovers. It hurtles around aimlessly as if waiting for someone to whisper directions.... full review

Raj has given this movie a So-So(Abhishek is the saving grace). Raj has posted 99 comments and has rated 67 movies. See Raj's page for more details.