A reasonably well-made Hindi suspense thriller. A non-agenda Akshay Kumar film. Both rare things I get to say. Aptly spooked and pleasantly surprised to say both of them together. (Available On Hotstar)

Granted, I get spooked easily and take absolutely no pleasure in watching mutilated bodies of teenage girls, but I wouldn’t want that to take away from the suspense and drama Cuttputlli creates.

Are they telling us that police officers know less than the seasoned Dexter-watching audience?

The crime drama maintains an even pace from the word go, even if it takes some time to set up the background, and does so quite shabbily. Actually, for the first half hour, I was pretty much setting myself up to watch one cliché after another.

What else can one expect when characters who have known each other for years talk to each other as if they are meeting each other for the first time? This is done obviously to tell the audience about the character. The same goes for the introduction given to the mind of a serial killer by a scriptwriter who does his research well. Are they telling us that police officers know less than the seasoned Dexter-watching audience?

Fortunately though, soon enough, this gives way to some decent story-telling. Or it builds up the drama well, for sure. The writing, once the initial spoon-feeding wears off, comes across as self-aware too. Just when the story starts to become repetitive, you are thrown into a tangential subplot. This is a detour of sorts and interestingly isn’t jarring. While some credit can go to the writing that weaves it into the main story, it is also the inherent strength of that sub-story. Also, an unexpected victim raises the stakes, which is very unlike an Akshay Kumar film.

In fact, this is one of his rare films in which the actor doesn’t come in the way of the story’s telling. Also, he sports a few more expressions than his usual bravado, macho ones. Interestingly, even though there aren’t too many other actors who get as much screen space as he does, enough side actors get space to not let Cuttputlli become an out-and-out Akshay Kumar film. I still cringe at the sight of this 50+-year-old romancing a woman almost half his age. No, it doesn’t matter that the character is said to be 36 years old. Thankfully, there isn’t much romancing. 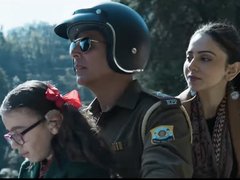 Yes, Cuttputlli also becomes one of those films that is made better because of what it doesn’t have than what it has—like an overwhelming star or opportune coincidences. This doesn’t mean there are no loopholes after the first half hour. A few clues seem to drop as it suits the writer rather than the story. A particularly jarring one was when the motivation of a person who recorded a weird video, as he follows one of the victims, is never questioned. And once they show the video, no one asks them why they didn’t let the cops know earlier.

Having said that, this is also one of the rare suspense thrillers in which I didn’t mind the perpetrator just narrating their motivation as a part of the climax. I wonder if it has anything to do with me being done with the gore and not having the stomach to watch anymore. I hope not.

Thumbs up, by Russel D'Silva, Bollywood Life : ...All things considered, Cuttputlli is a welcome return to form for Akshay Kumar both as a movie and when it comes to his own performance. In fact, this should've made it to the big screen over any one of his three erstwhile releases this year. I'm going with 3.5 out of 5 stars.... full review

Thumbs up, DNA : ...The film offers a tight and smart narrative, which thrillers require making it one of the most binge-worthy movies to watch this weekend.... full review

Thumbs up, by Devesh Sharma, Filmfare : ...Akshay's recent releases like Prithviraj and Rakshabandhan haven't done well over the box office and this may have prompted the makers to go for an OTT release for Cuttputlli. It's an engaging thriller and all we can say is that perhaps they should have gambled and released it in theatres…... full review

Thumbs up, by Rohit Bhatnagar, Free Press Journal : ...Sargun Mehta is a surprise. She is brilliant, sincere and of high quality as SHO and even hijacked Akshay’s scenes. She is perhaps the best out of the whole ensemble. Antagonist Joshua McLaire, originally a magician, is average and contributes a bit in unravelling the truth.... full review

Thumbs up, Hindustan Times : ...Watch this thriller for its sheer intrigue and the nail-biting screenplay that keeps you hooked wondering what's next. Even if the story gets sloppy at places, Akshay Kumar doesn't disappoint.... full review

Thumbs up, by Tanya Garg, india.com : ...Those who have seen Ratsasan would love to re-watch the original again but for those who haven’t, this Akshay Kumar film brings a lot of thrill, suspense and drama to the table. The mystery keeps challenging your wit and you constantly remain hooked to the story. The climax is one of the most important parts of any murder mystery, and Akshay Kumar’s film will keep you guessing until the very end (only if you haven’t watched Ratsasan). Highly suggested for OTT viewing over the weekend!... full review

Thumbs up, Pinkvilla : ...Overall, Cuttputtli is a faithful remake of Ratsasan that has some pros and some cons, but won’t let down the audience of suspense thrillers as also the fans of Akshay Kumar. It’s not a classic.. far off... but a worthy OTT watch for some who have not seen the original.... full review

Thumbs up, by Ronak Kotecha, Times of India : ...With its cold and damp setting in a nondescript hill town, ‘Cuttputlli’ gets the eerie atmospherics of a campy whodunit quite right. It goes to the extremes of a serial killer’s psychopathic exploits keeping in mind the sensibilities of its target audience.... full review

So-So, by Madhuri V, Filmi Beat : ...Oh, how I missed Ghibran's haunting background score from Ratsasan in Cuttputlli! Instead, what we get are two forgettable songs ('Saathiya' and 'Rabba') which merely comes across as glam props in the narrative. Read more at: https://www.filmibeat.com/bollywood/reviews/2022/cuttputlli-movie-review-akshay-kumar-rakul-preet-singh/articlecontent-pf326844-339840.html... full review

So-So, by Nairita Mukherjee, india today : ...Cuttputlli, now streaming on Disney+ Hotstar, is not a bad watch. But, with Ratsasan already available, and several other such thrillers in Hindi at your disposal - Raveena Tandon's Aranyak and Vikrant Massey's Forensic, to name a few - would you watch this one? The answer is clearer than who the killer is in Cuttputlli.... full review

So-So, by Shilajit Mitra, indian express : ...Early on, we glimpse a 'Raman Raghav 2.0' poster on Arjan’s bedroom wall. It’s an apt reference: the 2016 film is the last great Hindi serial killer flick of our times. It’s also a confession: Ranjit cannot fathom executing his at a comparable level. 'Cuttputlli' doesn’t elevate its genre of choice. It just makes the cut.... full review

So-So, by Sameer Ahire, Movie Talkies : ...Cuttputlli looks like a very low-budget film on screen. The screen filters are bad. Even the prosthetics are visible, from eye brows to powder to every cosmetic. Didn’t the editor see it? What was Ranjit Tewari doing in front of the monitor anyway? Julius Packiam‘s background score with no words and dance is better than Tanishk Bagchi and Dr Zeus‘s boring songs with lyrics and dance. Cuttputlli is badly edited and shot, just like any low budget thriller from a substandard industry... full review

So-So, by Zinia Bandyopadhyay, News18.com : ...All in all, the film would manage to hook you, but only if you watch with a clear head, and if you have not watched the original. There are quite a few distractions too, but overall the film does manage to maintain its pace, and hold the audience’s attention.... full review

So-So, by Nandini Ramnath, Scroll.in : ...Some of the underplaying works against Cuttputlli, especially in the scenes that require the film to shift gears from police procedural to emotional drama. The revelation of the killer’s identity is similarly rushed through. At least unlike recent films of this type, including Forensic and HIT – The First Case, Cuttputlli has a suitably shocking monster pulling the strings.... full review

So-So, by Anuj Kumar, The Hindu : ...The underrated Chandrachur once again excels in a small part. Cast in an interesting role, Sargun is a little too conscious in portraying the cop who leads a team, and a little more layering of her character would have helped. The talented Rakul Preet Singh seems to be using small parts with big stars as an investment for the future. With hardly any character arc, her performances are very much like this generic thriller... that has no authorial signature.... full review

Thumbs down, by Rahul Desai, Film Companion : ...The good news is tight the ending of cuttputlli is bot absurd as the ending of recent forensic a serial killer story the treats gender dymorphai as a visual gimmick. The bad news is that it's in a league of its own.... full review

Thumbs down, by Devasheesh Pandey, India TV : ...Interestingly, Cuttputlli is a remake of the 2018 Tamil thriller Ratsasan that had everything going for it that is off in the Bollywood version. In comparison, the original scores way above Akshay's half-decent attempt at creating an intriguing thriller. The genre is ripe for the taking, but somehow, Bollywood has more misses than hits. And Cuttputlli too is a letdown.... full review

Thumbs down, by Shubham Kulkarni, koimoi : ...don’t want to be this rude, I love cinema. But Akshay Kumar and his urge to churn out zillion movies in a year has now started making us fear his content, and that is definitely not a good space. Smell the tea creators, before it’s too late.... full review

Thumbs down, by Saibal Chatterjee, NDTV : ...Cuttputlli is the sort of film in which the cops are a clueless bunch who seem to be preparing for a mock drill on the morrow rather than chasing a deranged murderer. One suspect is identified but, unsurprisingly, it turns out to be a false alarm. The film gets extended by another hour. When the climax is eventually upon us, it is as underwhelming as anything else in the film.... full review

Thumbs down, by Sukanya Verma, Rediff : ...Cuttputlli is likely to follow suit what with an absolutely absurd climax and super amateurish execution that will have you rolling on the floor in unintended laughter. Or maybe they decided to 'make this into a comedy' after all.... full review

Thumbs down, by Pratikshya Mishra, The Quint : ...Maybe that’s why it’s disappointing to see a glimpse into what could have been when compared to the end product.... full review

Nay! Thumbs Down, by Raj : Down-graded remake of original

Dear Meetu, Thanks for being back with this review. I've seen the original Tamil one - RAKSHASAN. It is much better than this, which has included commercial cliches in the narrative that were not there in the original. The Tamil one was hit and cricially acclaimed with 50cr revenue, whereas this Hindi was sold to Disney for more than 100cr - If Cuttputli was released in theaters it would have made only 20-25 crs. Such are the ways of commercial business deals

Raj has given this movie a Nay! Thumbs Down(Down-graded remake of original). Raj has posted 99 comments and has rated 67 movies. See Raj's page for more details.
meeta

@Raj did not know these details. Thanks for the share. Wonder if Disney will recover because for someone who hasn't see the Rakshasan, this is not half bad.