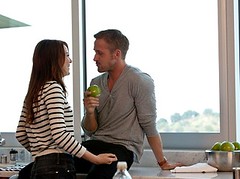 They are crazy, they are stupid, and they are all in...surprise...love! Right from the too-mature-for-his-puberty-hormones 13-year old to his parents going through mid-life crisis to anyone who crosses their path. It's your regular rom-com, the com bit of which you saw it in the trailer. And the rom bit has a couple of "aawwww" moments. Other than that there's nothing much in this largely superficial film.

It's kind of tiring when ALL the characters in a film have a U-turnaround. Of course, there's barely anything you cannot predict about a rom-com. But there is something about the chemistry, the "lines", the situations that you look forward to. Crazy Stupid Love has a little bit of this and an o-kay bit of that, but none of it is satisfying enough to make me recommend the film to you, even if it's playing on TV.

You have your regular cool, suave Jacob (Ryan Gosling) who knows how to objectify women and get them anyway. He obviously, guides simple, clueless-around-women-because-he-respects-them Cal (Steve Carell) through finding his "manhood".

That stage set, the women flit in and out of the screen as per convenience. But, the actors who play these women, Julianne Moore, Emma Stone and even Analeigh Tipton are so strong that they make their presence felt, however short their screen time may be. In comparison, the two men Ryan Josling and Steve Carelljust look like they are going through the drill of looking HOT and confused respectively. What broke my heart was Marisa Tomei's performance. Where is the lady who blows my mind away every time I watch My Cousin Vinny? In Crazy Stupid Love, she is over-acting and rather melodramatic. :(

In fact, a lot of things in the film are melodramatic - from the slo-mo for Jacob, to a repeat-for-effect for Steve Carell; from people in audience/on street clapping for the protagonists for no good reason, to the climax. All effectively cringe-worthy. In the middle of this though are some of the funny scenes from the trailer and some cozy, romantic moments.

Are they enough to pull you through though? Would have/could have, had there been a better climax. The one twist in the film is pretty cool, but it all falls flat with the "whatevaa" feeling the film gives when it ends. And that did it for me, till then I was doing alright with all the side-stories the film is laced with, they were all interesting. But, they led nowhere. And they have some shock-value situations and dialogues thrown in. They make you smile, but their purpose to catch you off-guard is transparent. You soon realize, they weren't necessary for core plot to move forward.

Yay! Thumbs Up, by Damon : I say to take a look at this hilarious and heartwarming movie!

good review, i loved the movie.

Anand has given this movie a Yay! Thumbs Up(Easy, relaxing, Fun). Anand has posted 2 comments and has rated 1 movies. See Anand's page for more details.