A rare gem that deserves to be pondered over, admired and treasured.

All that glitters is not gold. All that sounds ambitious is not awe-inspiring. All that seems unconventional is not path-breaking. And all is not Chaitanya Tamhane’s Court. Brimming with non-conformist aesthetics and peculiar treatment, the film exudes a sublime illustration of cinematic flamboyance. The painstakingly-penned script brilliantly musters varied narrative elements to craft a terrific piece of art. Realistic to the core, Tamhane’s visual storytelling transcend linguistic barriers with a dramatic ease. Perhaps not everyone's cup of tea, it’s a welcome change nonetheless. While being an eye-opener for our flawed society, it could also be a trend-setter for audiences.

A folk singer fearlessly indulges in radical activism against political wrongdoings. A defence lawyer, living a prosperous life, selflessly rallies behind those arrested unlawfully. A public prosecutor dutifully pursues the job to her without worrying about the legitimacy of a case. A judge obliviously relies on obsolete laws rather than the spirit of the law. A widow hopes to earn her living rather than accept charity. This is the world of Court, where the anguish of its characters easily shatters one’s thoughts of an ideal world. The case of this activist poet, allegedly charged for abetting the widow’s husband to commit suicide, is what binds this world together.

Court outdoes routine courtroom dramas to the last bits because of its radical storytelling. Instead of taking sides or being an interpreter, it chooses to be a distant observer. The simplicity with which Tamhane builds his characters and their backstories without uttering a single direct word is quite an achievement. Letting their agonies do all the talking, he paints a stark picture of the widening inequality and the worrying state of freedom of speech. He refuses to be preachy even while laying out the tiniest details – be it the Dalit killings, political propaganda or the plight of blue-collar workers. 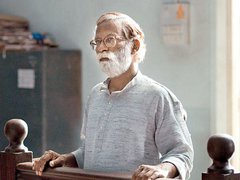 Since our judgment hinges on cultural and social milieu, Tamhane takes you away from the courtroom to their personal lives. Appearing inconsequential on the face, the lifestyles offer great insight and prove to be a master stroke element in the plot. A pragmatic approach in unfolding the story stays true to the subject and pays off, despite virtually non-existent drama. The film uses courtroom as a means to lay bare the flaws of Indian society at large rather than ridiculing judicial system alone.

With authentic production design, prolonged shots and no background score; Tamhane not only presents you the dull judicial proceedings, but also makes you feel the drabness. Each camera angle and its movement is well designed and keeps you involved as an observer. A striking balance between visual treatment and colour palette harmonizes the realism, making the film powerful. The repetitive use of bluish hues, even in warmer tones, creates an air of sombreness and monotony – which is perfectly in consonance with its theme. The lighting conditions dip from bright to dark as the trial unfolds, depicting its gloominess. When was the last time an Indian film excelled so well in visual storytelling? Bravo!

Vira Sathidar portrays Narayan Kamble impeccably.It’s hard to believe he is a non-actor, as are all other characters. Sambhaji Bhagat’s invigorating vocals bring a huge difference to his act. I am not sure if radical songs can instigate someone to commit suicide. But they certainly have enough vigour to make you adore them, just as they add to the film's advantage.

Court effortlessly manifests that hardcore realism can serve as an engaging experience. No wonder it is indisputably the best debut of the times and Tamhane gets everything right, something that is sure to leave many of his contemporaries as well as seasoned filmmakers in awe. Films like this make me believe that the resurgence of Marathi cinema is truly a thing of reality. If anything, resurgence at its staggering best.

Yay! Thumbs Up, by Murtaza Ali : Court is a multifaceted work of cinema that’s extremely relevant to the times we live in.

Your review gives me the urge to watch this film.

Fan has given this movie a Yay! Thumbs Up. Fan has posted 714 comments and has rated 200 movies. See Fan's page for more details.
Murtaza Ali

Court is a multifaceted work of cinema that’s extremely relevant to the times we live in. It is a commendable attempt on the part of a young and upcoming filmmaker like Chaitnaya Tamhane to come up with such a complex meshwork of cinematic art at the very onset his career. Chaitnaya impeccably blends cerebral and emotional elements to conjure up a powerful social commentary oozing with tragicomic motifs. The still camerawork (with camera often held at a distance), minimalist mise en scène, and the movie‘s deliberate pacing accentuates the slowness of the judicial process in India. Court has something to offer to everyone. The students of cinema most definitely need to study it. It is a film that needs to be watched!

My review of the film can be read at:

Murtaza Ali has given this movie a Yay! Thumbs Up(Court is a multifaceted work of cinema that’s extremely relevant to the times we live in.). Murtaza Ali has posted 20 comments and has rated 19 movies. See Murtaza Ali's page for more details.
Abhishek Gosavi

Thanks Fan and Murtaza Ali. @Fan, do let us know your thoughts after watching the film.

Kafkaesque. Except that this is the reality in India. A tremendous achievement!

Samir has given this movie a Yay! Thumbs Up. Samir has posted 56 comments and has rated 37 movies. See Samir's page for more details.
Fan

I did finally get the opportunity to watch it and I enjoyed every bit of it.

I had so many things to write about it. But when I re-read the review I realised that Abhisek has written exactly the same things that I wanted to write. So other than agreeing 100% with the review I have nothing much to add.

Nevertheless I will emphasise the fact that the film helped me better understand the lack of empathy of court members (from the judge to the peon) towards the people who are being tried. It is like a factory production line, each player having a role of tightening a certain screw or pasting a certain label or doing some other repetitive activity day in and day out. They are least affected by what the final product is going to be. And funnily enough I can't blame them for their apathy.