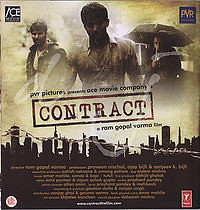 In broad terms, it's a 'been there seen that' underworld movie. The regular Ram Gopal Varma style of covering gangsters and their lives. But it has a certain rugged feel about it and the sub-plots and side characters are fresh which can make a good DVD watch.

Contract is different not in terms of emotion but in terms of the subject matter itself and I made it in a very entertaining way. It is not a dark and moody film like a Satya or Company... ... It is stylized and the characters are designed to create a high

Oops...make that double oops! 'Stylized', 'create a high' combined with the name Ram Gopal Varma, it means a really on-the-ears music, on-the-eyes camerawork and on-the-face over-dramatized portrayal of character. But, this time around we are fortunate because Amit Roy, RGV factory's trusted director of photography is conspicuous by his absence in the credit list. Yet, I'd be pleasantly surprised to find subtlety squeezing its way into this factory.

The "Underworld meets terrorism" tagline clearly seems like a marketing ploy to get the initial crowds into the theater. Because Contract has as much to do with terrorism as say, RGV ki Aag has to do with Sholay. (I promise this is the last time I mention RGV ki aag when I review a RGV product!) Having said that, if you're game for another vengeance-ridden protagonist who has a "shoot at sight" order from the director, this one is it. The story is fairly well-written and the characters are border-line caricatures but non-standard enough to grab your attention.

First things first, as usual, I couldn’t handle the random "see my nostril hair" super-tight close-ups. My complaint like always, is more against the randomness than with the actual close-ups. I must say though, that there are some scenes which could have easily used the standard over-the-shoulder editing, but instead, close-ups or mid-shots were interspersed with shots of both characters in the same frame. I'm not saying this is path-breaking, just saying it’s a breath of fresh air from the extensive "blackhead coverage".

Of all the departments of film-making, in Contract, the casting fascinated me the most. Many movies make me wonder about some of the decisions. What went through the writer's head? What was the interaction between the cinematographer and the director in this shot? Contractmade me very, very curious about the casting process. What must have the auditions been like? How did they pick the actor to absolutely suit the character? So many of them, new faces and none of them looked out of place.

Now, the importance of the character in the whole scheme of things can be debated, but the actors were chosen well and almost each one did justice to the role given to them. Some of the characters were over-ridden by stereotypes set apart for them. For example, the main lead played by Adhvik Mahajan (Aman) had to have a wooden, sullen look just because no one thought of another way of portraying a peace-loving guy who has been hardened by the vagaries of life. Not to mention Adhvik's voice which is a complete turn down.

For instance, Prasad Purandhare looked sinister in his opening shots as the cop trying to convince Aman into joining his ploy to get to the terrorists. So much so that I wouldn't have been surprised if he was behind the havoc in Aman's life in the first place. The very sight of loud characters get my nerves crawling up my skin. So, I think it’s a huge compliment when I manage to not only tolerate them through the movie, but in fact enjoy their company for the first couple of times they are on screen.

While credit does go to Upendra Limaye and Amruta Subhash who played the loud Goonga and his louder wife, it is equally shared by the way the characters are written and the things they are made to do even though they are not the focus of the camera.

There is a certain rawness about the way things are handled in writing the sub-plots too. I'm sure you have always wondered why the protagonist, who is out to kill the villain, chatted him up first? You'll know why when you watch Contract. Because any other way and it looks too easy to be true. But, they deserve points for trying something different.

While they let us see on screen is gritty when it needs to be, what we don't see but is implied has an effect on your nerves too. Then it maybe, the image of a wife-beater you create in your head or how you are blind to the visuals when the twist in the lyrics of an innocent rhyme, 'twinkle twinkle', hits you. The latter works more so because it is a child's voice has been used.

Unfortunately, the same cannot be said about creativity in the writing of the broader plot. It is a decent watch but ultimately there's nothing new in the story. Ram Gopal Varma on his blog mentions,

Somebody asked me if Contract is a trilogy. I wouldn’t say that, because trilogy sounds more like a finale and my intent is to make a hundredology of gangster films.

I guess that's why, he's just touched upon the terrorism angle that's claimed to pervade into the underworld. After all there are 97 movies to go, what's the rush?

Thumbs up, by Janhvi Patel, indya.com : ...it is a compelling and engrossing watch... full review

Thumbs up, by Janhvi Patel, indya.com : ...The blast scenes make you cringe with fear. Very brutal and real.... full review

So-So, by Baradwaj Rangan, Blogical Conclusion, The New Sunday Express : ...What we have here is some sort of vigilante movie – a fairly gripping one – that just happens to be set against the backdrop of the underworld... full review

So-So, Movie Talkies : ...The music and the soundtrack of the film are also very well worked in with the film's theme.... full review

So-So, by Sonia Chopra, Sify Movies : ...despite the blatant commercialisation attempt, the film is not bad.... full review

Thumbs down, by Aparajita Ghosh, Apun Ka Choice : ...The background music is so loud at times that it almost screams how viewers ought to feel in a particular scene.... full review

Thumbs down, by Anand Vaishnav, Buzz18 : ...even Varma fans are perhaps tired of the very same tools that made him a breakthrough filmmaker.... full review

Thumbs down, by Martin D'souza, Glamsham.com : ...If you venture to watch CONTRACT, don't expect to be in the COMPANY of SATYA!... full review

Thumbs down, by Khalid Mohamed, Hindustan Times : ...Of the cast, only Sumeet Nijhawan as R D the don is worth a mention.... full review

Thumbs down, by Rajeev Masand, IBN Live : ...Almost all key scenes in Contract give you a sense of déjà vu... full review

Thumbs down, by Taran Adarsh, IndiaFM : ...The story is just not new.... full review

Thumbs down, by Mayank Shekhar, NDTV : ...The premise is vaguely reminiscent of the Salim-Javed script Don... full review

Thumbs down, by Hanumant Bhansali, Radio Sargam : ...The film is not the best on underworld offered from the kitty of Ram Gopal Varma.... full review

Thumbs down, by Nithya Ramani, Rediff : ...RGV has drawn some great performances from the rest of the cast too... full review

Want to Watch, by บริการ teamspeak3

Yay! Thumbs Up, by Hindilyrics4u.co.in : Ramu should b sentenced imprisonment for making such movies...dont know hw many people (among the au

Aman (Adhvik Mahajan) is an army man who comes face to face with Sultan (Zakir Hussain), a terrifying terrorist. Sultan chillingly explains how he is happy because he has a mind of his own and knows his aim of life. Aman, though not convinced is willing to give Sultan the benefit of doubt. He leads a peaceful life until one fine day...

not at all, soapy! Just watched Contract and am in the process of writing the review. Should be up here by tomorrow morning, latest!

In braod terms, it's a 'been there seen that' underworld movie. The regular Ram Gopal Varma style of covering gangsters and their lives. But it has a certain rugged feel about it and the sub-plots and side characters are fresh which can make a good ...

Terrorism is the favorite concept for the film producers from the beginning.

I hope Mr.Ram Gopal Verma will come with some new concept in his new movie contract.

//I promise this is the last time I mention RGV ki aag when I review a RGV product!//

I know! even I have a tough job avoiding Aag when talking of a Ramu movie.

U seemed to have liked Contract better than me..
My take on it:
http://passionforcinema.com/contract-movie-review/

The thing is Sudhir, I find it a bit annoying when people complain about old work, but I just can't let Aag let go...annoyed now by my own double standards ;) But, i'm going to keep my promise, hope RGV will oblige too, by not forcing me too :D

I like your review. According to me the movie is not that much as i expected. It is similar to satya.