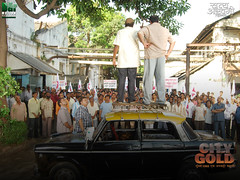 Sure, the concept is nice. But, the nice stuff stops there. I'm not at all passing a moral judgement on the characters' lack of character. It's just the loud and annoying way in which things play out that gets on your nerves after about an hour. And there is another 1.5 hours to go.

It is difficult to shake of the thick legacy of mill-worker-era films like Roti, Kapda, aur Makaan and Namak Haraam. And I'm sure there were more films on the issue that I haven't seen. And despite having seen all of this at least 20 years ago, ironically, it was refreshing to see the concept on screen. But that's where the freshness ends. It then turns into regular Manjrekar-ization of the topic. Loud, louder, and if you haven't heard it yet, loudest.

The degradation of the Indian - read Bombayite - moral fiber to barely threadbare in the early 80s - be it sex or violence. The cause being identified as globalization and commercialization of semi-public property. The collateral damage due to the transition from semi-socialism to capitalism - the entire value system. All this heavy stuff is crammed in 2.5 hours. You'd think that that would make the film fast-paced and interesting. Unfortunately, it's all done in a way that doesn't touch you. It can be argued that the film might make a better impact on people who were actually affected by the mill-worker strikes, but what's a film that doesn't make you identify with characters that are unlike you?

I completely appreciate the gray shades given to each and every character. But their haphazard behavior and choppy way of moving from one sub-plot to another or one issue to another, is extremely exasperating. Not to mention, it completely highlights the confusion the makers seem to struggle with. What deserves more weightage? The mill-workers' political situation? The impact it has on the spouses and the children of these mill-workers? The demonization of corporatization? What? What?? What???

And then, you top it off with some loud acting, blaring sound design and shocking visuals. A sample of the last is situation of poverty and desperation reaching such an insane level that violence makes the youth, the nation's tomorrow, cannibals and masturbators-in-public.

I understand the frustration that Mahesh Manjrekar tries to convey, not only in this film, but all his films. And I value the courage it takes to follow through on showcasing the exasperation he feels or rather he thinks the audience ought to feel. But such on-the-face, over-the-top execution makes me wait for the interval after the first half hour of the film and for the end-credits, post-interval.

Sure, the generation born to (and after) the generation which struggled for the basics - food, shelter, and clothes - needs to be sensitized and made aware of the cost at which the luxuries to them have come. But, this one only succeeded in repulsing me from the subject.

Thumbs up, by Bobby Sing, Bobby Talks Cinema.com : ...The best scenes of the movie include the ones written around the young kids and adolescents, who are excited enough to hold the gun and pull its trigger to kill anybody... full review

Thumbs up, by Taran Adarsh, Bollywood Hungama : ...The relationships, the violence, the language depicted in the film may shake you intermittently from your comfort zone. ... full review

Thumbs up, by Nilesh Raje, merinews : ...The movie clearly depicts that money is not everything but money can make everything. ... full review

Thumbs up, Movie Talkies : ...t is not a pretty story and Manjerkar has made no attempt to tone anything down either.... full review

Thumbs up, by Sampurn, real bollywoood : ...Mahesh Manjrekar deserves kudos for attempting such a film which exposes the nexus between the mill owners, politicians and corrupt bureaucrats... full review

Thumbs up, by Nikhat Kazmi, Times of India : ...The high point of the film is its ensemble cast that may boast of no stars... full review

So-So, by Baradwaj Rangan, Blogical Conclusion, The New Sunday Express : ...The wife is played by an improbably glamourous Kashmira Shah, who, with her impeccable makeup and her supermodel curves, is the last person you’re likely to run into in a chawl in the nineteen eighties... full review

So-So, by Fatema , Cinemaa Online : ...Based on Adhantar, a play written by journalist Jayant Pawar, the film is also meant to be a song of pain for Mumbai as it was, or could have been if not for this event.... full review

So-So, by Alina Sen, fullhyd.com : ...does not shy away from loud, obvious, and melodramatic moments in the film, even though you wish for a bit more restraint in some scenes. ... full review

So-So, by Martin D'Souza, Glamsham.com : ...The son-in-law of Khetaan Mills, Mahendra (Sameer Dharmadikhari), who wants to shut down and sell its land, is very unconvincing. His track is too filmi and lacks sting... full review

So-So, by Rajeev Masand, IBN Live : ...the film is salvaged to a fair extent thanks to the arresting performances by the mostly unknown cast... full review

So-So, by gaurav malani, indiatimes : ...The screenplay by Jayant Pawar and Mahesh Manjrekar is character-driven with the story branching out into several subplots through each character.... full review

So-So, by Sanjukta Sharma, Live Mint : ...All his best films have pluck and a loud dynamism, almost always bordering on melodrama. City of Gold is no different, although it’s far inferior to Vaastav... full review

So-So, by Anupama Chopra, NDTV : ...The trouble is that the director doesn’t know when to stop. ... full review

So-So, by Sonia Chopra, Sify Movies : ...There are some arresting moments – you truly feel for the plight of the workers, and are moved when their firebrand leaders climb on top of cabs and rev up the workers.... full review

Thumbs down, by Divya Solgama, Gomolo.in : ...He loses his focus of the main motive behind the film and ends up with dark, over violent and total negative. ... full review

Thumbs down, by Mayank Shekhar, Hindustan Times : ...These angry young men, the ‘lukhas’ and Packiyas of the grimy world, playin’ carom, shootin’ the wind, could exist in any bombastic film such as this, without any burden of context. It’d still work. Violence and catharsis is essentially the point. ... full review

Thumbs down, by Preeti Aror, Rediff : ...One huge flaw in the film is mill-owner Khaitan and his avaricious son-in-law Sameer Dharmadikhari (Mahendra). These two characters are flat, one-dimensional and mouth corny dialogues.... full review

Want to Watch, by Does Truth About Abs Really Work : Portland

Yay! Thumbs Up, by Ervin

Yay! Thumbs Up, by Idea Smith : A must-watch for anyone who calls themselves a true Mumbaiker

Yay! Thumbs Up, by Jaipur Escorts

Yay! Thumbs Up, by Mike : Nice movie, have nt seen it yet

Yay! Thumbs Up, by natural solution for pcos : Worth watching once.

Yay! Thumbs Up, by No Prescription

Seems like a serious movie but worth watching definitely.

Mike has given this movie a Yay! Thumbs Up(Nice movie, have nt seen it yet). Mike has posted 2 comments and has rated 2 movies. See Mike's page for more details.
IdeaSmith

Actually I loved the movie. I spoke to the boy about this issue a couple of months back and he tracked this movie down for me to watch.

I don't know if it's because I spent a considerable time in the area described by the movie but somehow the stories just resonated with me.

Idea Smith has given this movie a Yay! Thumbs Up(A must-watch for anyone who calls themselves a true Mumbaiker). Idea Smith has posted 13 comments and has rated 1 movies. See Idea Smith's page for more details.