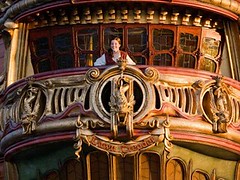 The Chronicles of Narnia: The Voyage of the Dawn Treader

We all know Aslan, the White Witch and the Pevensie kids pretty well after the last two Narnia films. This movie brings only the two younger kids, Edmund and Lucy, and their intolerable cousin Eustace to Narnia to help Prince Caspian find the seven lords of Narnia on his ship, the Dawn Treader.

A fluent flow of story and regular doses of excitement keeps you rooted to your seats through the run-time. Unlike the previous episodes, where they rushed to cover the plot points of the story, this movie brings out depth to the characters of the film. The music intensifies the terror and matches the unhurried plot development.

A good thing is that you don’t need to read the novels to understand this movie. Of course people who’ve read the series will argue differently because of a couple of changed sequences, but that is true of every classic fantasy novel adapted into a movie. I could see kids in the theatre tremendously enjoy themselves, and adults to seemed to genuinely like the world of magic and wonderment. The dialogues are awesome, but I bet they are right from the book.

The actors playing the Pevensie kids haven’t improved much over the previous films. But casting Will Poulter in the role of Eustace Srubb is one of the better decisions. He does a brilliant job of being a whiny, unbelieving and obnoxious cousin. His encounters with Reepcheep, the talking mouse, give many a laugh with excellent timing and dialogues. Ben Barnes plays a good Caspian portraying his buried doubts of ability.

The action sequences are really good, especially considering that the target audience is school kids. Though the emotional scenes were a bit lengthy and boring, I am sure kids will love them. The special effects are superb too. The talking mouse Reepcheep, the invisible castle and Monocolis (one legged dwarfs) are awesomely made. Things like showing fog issuing from invisible and magical mirrors' mouths were great ideas to make the film believable yet magical. That Aslan looks old and less majestic, was a major disappointment for me because I love his character the most. Thankfully, his reverberating voice is as captivating as ever before. And they tried their best to make the scariest serpent and the most beautiful dragon.

Though the climax feels like a mix of Pirates of the Caribbean and Harry Potter, it has its own charm. 3D sure helps, though they could have made it much scarier and more appealing. With a little more maturity in the story than the previous films shows, direction takes the cake for this film. Like any other book adopted into a film, this one has loopholes too. So if you have read the novels, you surely not going to like the way they twist the story to their convenience. But the visual treat compensates for it. In any case, this film is a good watch for kids as well as adults, - 3D or 2D.

Edmund and Lucy Pevensie, with their cousin Eustace, go to help Prince Caspian in the magical world of Narnia.

The Chronicles of Narnia: The Voyage of the Dawn Treader - Cast, crew, links