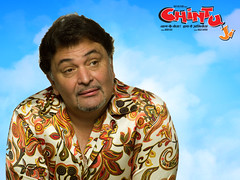 Once upon a time, there was a little village city called Had-bahedi. The people there were content with what they had, despite knowing the world outside has a lot more conveniences. They were always happy to take when it's given without asking for anything. And then the world outside enters to impose itself on Had-bahedi. Yes, Chintuji is a fairy tale. And that by definition makes it imaginary. The writer is asking us to enter his make-believe world and think, "exactly what will it take for this to be the real world". Nice thought. But can't be taken forward given the complexities of the real world and their over-simplification for the sake of making it into a film.

There isn't much you can comment about plausibility of plot points when the whole concept is intentionally unlikely to happen. The actors are meant to behave like they were in a street play. They are very purposefully loud and exaggeratedly comic.

Sure, the actors are a bit of a saving grace. Very few can pull of being adorable while being arrogant like Rishi Kapoor. Priyanshu looks sincere as he should be. The rest are all just vague caricatures that represent Had-bahedi.

What remains then is the way the plot is carried out and to a certain extent the strength of the dialogues. Both are more or less mediocre. There are jumpy cuts, predictable situations and drama that is carried out way too long. The dialogues are wannabe non-preachy. Like a bolt of lightning a character asks an insightful question, realization strikes the questionee, and immediate transformation from haughty to charming happens.

Ultimately fairy tales unless fairly complicated make for good stories for children. But, since Chintuji is about corruption, politics, egos, etc it isn't kid-material either. And it is fairly simplistic too. So other than a quiet "well-tried" applause, there ain't much we can give it.

Thumbs up, by Amodini, Amodini's Movie Reviews : ...it was interesting, clean and had genuine humor.... full review

Thumbs up, by Noyon Jyoti Parasara, AOL INDIA : ...Every character evokes your emotions – up to the rickshaw puller who appears just once.... full review

Thumbs up, by Anand Vaishnav, Buzz18 : ...At one level Chintuji is also a comment on the celebrity culture in India, where people idolise their stars blindly.... full review

Thumbs up, by Udita Jhunjhunwala, DNA : ...Writer Ranjit Kapoor, credited with dialogues for Jaane Bhi Do Yaaron and The Legend of Bhagat Singh, among others, makes a respectable directorial debut.... full review

Thumbs up, by Rajeev Masand, IBN Live : ...Chintuji wouldn't be half the film it is if it weren't for the abundant charm and sheer lack of inhibition by its principal actor, Rishi Kapoor who sportingly participates in this self-parody... full review

Thumbs up, by Taran Adarsh, IndiaFM : ...Inspired by a play THE MAN WHO CAME TO DINNER, CHINTUJI abounds in humour and the comic sequences... full review

Thumbs up, by Anupama Chopra, NDTV : ...What follows is a superbly funny culture clash that becomes an insightful exploration of stardom in India,... full review

Thumbs up, by Esha Razdan, real bollywoood : ...Chintuji indisputably is the heart and soul of the film. To see his performance is a sheer treat.... full review

So-So, by Avijit Ghosh, Times of India : ...The first half speaks the language of community; the second half is personality oriented.... full review

Thumbs down, by Sameer Dagga, StarBoxOffice : ...Though Rishi Kapoor might be playing the lead, he could have done a better film, given his stature in the film industry. ... full review

Yay! Thumbs Up, by Hindilyrics4u.co.in : Ultimately fairy tales unless fairly complicated make for good stories for children. But, since Chin

Yay! Thumbs Up, by Hindilyrics4u.co.in : There isn't much you can comment about plausibility of plot points when the whole concept is intenti

Yay! Thumbs Up, by Telugulyrics.co.in : Ultimately fairy tales unless fairly complicated make for good stories for children. But, since Chin