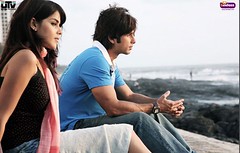 The world of an aspiring actor (Shahid Kapoor) in big bad Bollywood. His tiny failures making him into a big-time LOSER, his mini-successes adding up to nothing substantial. You heard it over and over again. You've watched it at least 4 times a year. But you are hopeful that it will still be told in a way you'd enjoy; that this sorry guy will appeal to you; that you'll feel bad for him. But the makers of Chance Pe Dance don't care enough to get you involved, so there's nothing much you can give them other than maybe some eye-rolls.

Just when Shahid Kapoor was beginning to grow on me as an actor he completely irritated me. The faces he pulls, the way he carries himself are only annoying. Genelia D'souza is her regular chirpy-bubbly self and I wonder when we'll know if she can do anything else. Sure, she has her occasional emotional moment here, but nothing to remember her by.

Can I really blame her? With such a regressive role written for her, there is only so much a girl can be expected to do. Tina, the budding choreographer she plays, is supposedly good at her job. She begins to like a guy and her life as her own ends? Why? Or maybe they are trying to comment on the undying love that a woman is capable of. Though the way the story is narrated, I doubt the writers had any such lofty aims. Laziness, they had loads of.

Okay, lets' assume for a while that detailed characters was not something the writers had on mind. They wanted to create a story about opportunities and how you take them can make or break you. But, unfortunately, the lines in the film are as lame as that last line I just wrote. And the events in the film are so functional and episodic. They don't flow into each other. They just come and go as is convenient.

Now, if the characters are going to behave like you'd expect them to, and if they are going to spout lines, ad verbatim what's playing in your mind, the story is bound to be predictable. There's no attempt to deviate from the norm.

What's left than is the backdrop of the film. Both Sameer and Tina are supposed to be awesome dancers. What I know after watching this film is that Genelia and Shahid are awesome with aerobics. Dancing? Maybe we'll have to wait for another day, another film.

For now, let's just say the entire team got all the moves wrong.

Thumbs up, by Susan Jose, India-Forums : ...Music is foot-tapping. Especially in the rap number that goes Just Do It. The joint effort of Pritam Chakraborty, Adnan Sami, Sandeep Shirodkar and Ken Ghosh is just good enough. Does not leave you asking for more.... full review

Thumbs up, by Vipasha Pillai, StarBoxOffice : ...here’s something we didn’t like about the film and that is the film’s music arranged by singer Adnan Sami.... full review

So-So, bigoye.com : ...We are still confused whether acting or dancing was Shahid’s passion in the film, however, Shahid scores big in both departments... full review

So-So, by Martin D'Souza, Glamsham.com : ...Mercifully, CHANCE PE DANCE has it fundamentals in place and does not make an ass of its script. ... full review

So-So, by Subhash K Jha, Now Running.com : ...Right from the credit titles, where we see our struggler-hero prepare for another day of selling himself to an unthinking entertainment industry... full review

So-So, by K N Gupta, SmasHits.com : ...Acting-wise, the movie is a great success inasmuch as Shahid Kapur has excelled in his dancing talent, and so has Genelia who looks quite pretty and does her part too well. ... full review

So-So, by Nikhat Kazmi, Times of India : ...it offers you nothing new in terms of the script which ends up as the weakest link in this entire show. ... full review

Thumbs down, by Noyon Jyoti Parasara, AOL INDIA : ...The angle of kids is summed up without any expected ‘hungama’. ... full review

Thumbs down, by Manish Gajjar, BBC : ...Genelia charmingly plays her role as Tina giving Sameer a shoulder to cry on in his hour of need. ... full review

Thumbs down, by Baradwaj Rangan, Blogical Conclusion, The New Sunday Express : ...Fans of Shahid, therefore, should (and will) waste no time in heading to the nearest movie screen.... full review

Thumbs down, by Bobby Sing, Bobby Talks Cinema.com : ...Shahid is the only “Chance” for the movie to impress its viewers and I sincerely doubt he alone would be able to save it. ... full review

Thumbs down, by Abhijit Mhamunkar, Buzz18 : ...Genelia in a half-baked character manages to charm and her chemistry with Shahid is good. ... full review

Thumbs down, by Deepa Gahlot, cinemaah : ...More than an actor, Shahid Kapoor is an 'item boy' in the film, building up towards an eight-pack revealing climax.... full review

Thumbs down, by Aniruddha Guha, DNA : ...So even if your heart is supposed to go out to penniless Sam – living out of his car now – he looks like he’s been splurging on protein shakes and working out at a high-end gym, although there are no scenes to establish that.... full review

Thumbs down, by Deepa Garimella, fullhyd.com : ... Genelia joins the club. She's not really furniture in the movie, but isn't really the plumbing system either. She does light up scenes, though.... full review

Thumbs down, by Mayank Shekhar, Hindustan Times : ...Songs don’t take the motionless picture forward. This is not a musical. The filmmaker here is merely a director of music videos, and there is one after half a dozen others: “Back straight. Attitude. Feel the music.” Sure.... full review

Thumbs down, by Rajeev Masand, IBN Live : ...The film's writers -- if you can call them that, considering there is no script to speak of -- fail to invest even a hint of vulnerability in Sameer.... full review

Thumbs down, by Mihir Fadnavis, india.com : ...The good news is that both Shahid and Genelia are just enough to best the bum script, they are likeable and their dance talent is undeniable... full review

Thumbs down, indiainfo.com : ...After getting, what looks like a winner idea, Ken Ghosh seems to have taken it too easy on creating a good enough script.... full review

Thumbs down, by Gaurav Malani, indiatimes : ...The film starts on a promising note with smoothly synchronized opening credits but by its sixth scene you sense where it’s heading... full review

Thumbs down, by Tushar Joshi, MiD DAY : ...great thing if you are making a remake of Step Up! or a High School Musical, but making a dance film that loses focus and steam early on, isn't going to help anyone.... full review

Thumbs down, Movie Talkies : ...he film doesn't have a 'Dhan Tana' or a 'Nagara' type of number, so there is little help for Ghosh from that quarter. ... full review

Thumbs down, by Anupama Chopra, NDTV : ...But these scenes of struggle don’t touch you because Shahid is in star mode from the first frame... full review

Thumbs down, by Ashok Nayak, Now Running.com : ...Soon he loses out on the promised role too as the director launches a nationwide hunt. Sam takes part in the competition... no prizes for guessing the rest of the story... full review

Thumbs down, by Namrata Joshi, Outlook India : ...Then you have an obnoxious kid picking his nose and doing things with the gunk. What’s so funny about it?... full review

Thumbs down, by crazyrals, Passion for Cinema : ...what did Sameer want to become? Neither the director was clear on it, nor the screenwriters. ... full review

Thumbs down, by Ankit Ojha, Planet Bollywood : ...a below average predictable affair that beats around the bush for so long you just don’t get it.... full review

Thumbs down, by Hanumant Bhansali, Radio Sargam : ...On the positive side, Shahid Kapoor rocks and carries the movie completely single handed... full review

Thumbs down, real bollywoood : ...The film offers simply nothing in terms of a plot.... full review

Thumbs down, by Raja Sen, Rediff : ...None of these departures from the conventional work at all, however, and we're served up a film that mostly refuses to amuse or to compel. ... full review

Thumbs down, by flyingrodent, Upper Stall : ...what could have been an actor's pursuit of happiness ends up being another failed attempt. ... full review

Thumbs down, by SpiceZee Bureau, Zee News : ... In fact, the only saving grace of ‘Chance Pe Dance’ are its meticulous dance sequences where Shahid leaves you enthralled by his moves (just don’t miss the six pack either!).... full review

Yay! Thumbs Up, by Hindilyrics4u.co.in : For all telugu Songs Lyrics Visit: http://www.telugulyrics.co.in

Yay! Thumbs Up, by Hindilyrics4u.co.in : For all English Pop album Songs Visit http://www.enjoylyrics.com

Yay! Thumbs Up, by Hindilyrics4u.co.un : For all Hindi/Tamil/Telugu songs lyrics

So-So, by Cinemachances : The world of an aspiring actor (Shahid Kapoor) in big bad Bollywood. His tiny failures making him in

Sameer Behl (Shahid Kapoor) is an aspiring actor mainly because he was born and stayed cute. He sees his ups and downs in life as an actor. At the end where does he reach? Up or down? If you really care you can go find out for yourself.

Pretty much everything people is either

It is ok, if you have nothing else to do then you can definitely watch it. Nothing captivating

Alex has given this movie a So-So. Alex has posted 1 comments and has rated 1 movies. See Alex's page for more details.