The First Avenger is back, and this time he's saving the world from an enemy that lies within. Captain America: The Winter Soldier is good fun while it lasts, though it disappoints a bit as well, primarily in how it doesn't do justice to the intriguing villain of the title. Still, a good cast and some exciting moments make the film engaging enough.

It's hard to not have fun watching a film like Captain America: The Winter Soldier on a gigantic IMAX screen, which virtually transports you into the middle of the action. With a plot that attempts to be relevant - what with the current scenario of worldwide electronic espionage - and a neat little cast that has a few welcome additions to the previous film, it keeps you entertained for the most.

Yet, as you ponder over it, despite the clear attempts to stand out, this sequel is really no different from the slew of superhero reboots and sequels that are a regular summer feature, now. Same old, same old.

In Chris Evans' first turn as the First Avenger, we were served a relatively silent film - a film that set up the character well, and had a genuine attempt at a World War II period feel to it; at least as much as a big superhero film could muster. The sequel is set in the current day, and is bigger, grander and louder. 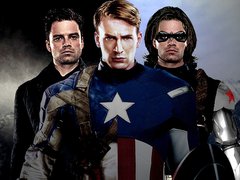 Captain America, now settling in to the quantum leap the world has taken since he last remembered it, is sucked in to a conspiracy within S.H.I.E.L.D. itself, one that has global security ramifications. Meanwhile, he is also up against a mysterious villain, known only as the Winter Soldier, but who is tied intricately with Captain America's past.

With a staple dose of humour, tons of action, and with a lot of talk along the way, the film pretends to be a bit of a heavyweight in terms of its plot, but comes across as a tad too superficial, eventually. While the twists are predictable, the action has been shot far better than the last film, with an unsteady look that obviously gives it an edgier feel. The 3D, however, doesn't particularly add much to the film.

With Scarlett Johansson's Natasha (or Black Widow) and Marvel's latest big screen debutante Falcon (played quite well by Anthony Mackie) for company this time round, there's a whole lot of forgettable fun to be had while it lasts. Another addition to the cast, which lends the film so much more credibility than it eventually commands, is Robert Redford who plays the enigmatic Alexander Pierce.

Samuel L. Jackson - who seems to be having quite some fun in his appearances as Nick Fury, Director, S.H.I.E.L.D. - gets a longish role as well, and one of the best moments of the film is the briefest of hat tips to his Jules Winnfield from Pulp Fiction. But that's probably just the Tarantino fanboy in me speaking.

Directors Anthony and Joe Russo, known for far smaller films, usually lighter in vein, take on their biggest film to date, and they do a decent job with it. Though it lacks any truly jaw-dropping set pieces, the frames and scale are grand enough, while some are actually quite imaginative in execution; one car chase sequence is exhilarating, and the film has the extended action climax we've come to expect.

The biggest problem with the film, for me, was the lack of justice to the eponymous villain, the Winter Soldier. His appearances are sporadic, his presence is never fully explained, and his history with Captain America is never given enough meat. There simply is no reason why his name is included in the title of the film, when the plot of the film has virtually nothing to do with him. He is relegated to a side attraction, at best.

Expectedly, the end credits scene - directed by Joss Whedon - teases a little, with the introduction of couple of Marvel villains who are poised to add some spice in the future. In fact, it's time we admit that these standalone Avengers films are fast becoming just like teasing nuggets for Avengers: Age of Ultron. That, really, is the big prize we're waiting for, in lieu of the time we give the films along the way.

Yay! Thumbs Up, by Mahesh Mohan

Awesome movie.. after long time got chance to watch thid...

Pradeep i don't agree with you at all, the film is superbly written and bears a striking difference from earlier Marvel superhero films. Chris Evans has meticulously performed his part emphasizing lot of emotional content. Also it is surprising to see the directors focus much on the part of the film's execution by reducing CGI spectacle to a relative minimum in favor of reviving the pleasures of hard-driving old-school action, surprising character development and intriguing suspense.

guddu has given this movie a Yay! Thumbs Up(Awesome film). guddu has posted 143 comments and has rated 73 movies. See guddu's page for more details.
Pradeep

@guddu: I suppose it was my loss, then, that not once did the film intrigue me with any suspense. All the twists were quite predictable, right at the outset. Also, the handling of the Winter Soldier aspect was exceedingly disappointing.

As far as the action is concerned, there is no such thing as CGI-less action in big studio Hollywood productions anymore. They don't shoot any of their action, no matter how it is, on live locations. It is all shot on a chroma soundstage, with background plates, and VFX embellishments added later. I did mention that some of the scenes were imaginatively executed, however, so I suppose those were the ones you liked.

Chris Evans' performance was superb, I agree. I didn't mention it specifically, because this is his fourth turn as Captain America (if you include his bit appearance in the Thor sequel), and third full role as Cap. He's been solid all throughout, and has grown with the character each time.

For me The Avengers, the first Thor film, and the Iron Man trilogy in totality are a wee bit better than this film. More importantly, in terms of story and setting, the first Captain America itself was a notch higher than this one, even though this film ranks way higher as far as scale and execution is concerned.

I completely agree, however, that this film is actually good fun on the big screen. Just that there have been Marvel films that were equal or more fun than this one.

I think this review is more as a general audience, which probably is most of the audience right now, including myself. But, what we as the general audience fail to keep in mind is that these movies are based on comic books. And the treatment of the winter soldier is bang on in that regard. The twist and the coup by the "other" organization is exactly based on the comic books.

In fact, if you follow the TV series, Agents of SHIELD, then this movie is in between the 16th and the 17th episodes. So I'm pretty happy with the way MARVEL studios has planned out their cinematic universe. I think the trailers made us expect that this movie is mostly about Cap battling against the Winter Soldier. I know that it feels disappointing when the Winter Soldier was denied a meatier role. But, we have to consider other factors. These movies are building up on top of each other. Sebastian Stan has a 9 film deal with MARVEL, so we are definitely going to see more of him.

Many comic book fans actually LOVED this movie. They feel it is the best movie to come out of MARVEL so far. Frankly speaking, up until now I thought Cap was the second lamest Avenger, the lamest Avenger being Hawkeye. But after this movie Cap is as formidable as any one else. What is interesting to note is that Cap is the only one whose character has developed some depth. Other characters simply don't have this kind of moral dilemma. So this makes Cap even more amazing. The other reason this movie is awesome is obviously the meaty role given to Black Widow.

About being superficial, I think we need to realise one thing here. There has been a fundamental difference between DC Comics and MARVEL. In the DC Comics, the characters always have deep personal conflicts and battles. At MARVEL, characters were designed to be part of a shared universe, so the team always counts more. Or, to put it differently, it is the effects of an individual on the whole that matters more at MARVEL. Whereas in DC, the transformation and progression of a single character through his/her own inner battles is the primary focus which brings about change around the character. This is fundamentally why MARVEL movies have humor as a large part of their universe.

Anyways, I would suggest you follow the TV series as well, because there is a lot of interesting stuff happening over there too :-)

@Mahesh Mohan: Thank you for reading, and for the detailed comments. You make some interesting points there. Yes, I do like how Marvel seems be working on so many things all at once, and all interlinked in the way they are. Agents of SHIELD is definitely on my list of things to watch soon.

As far as the superficial bit is concerned, I was talking specifically of the espionage angle to the plot. As a theme, it is extremely relevant to the world we live in today, but it was used as merely a plot device. Not a problem, really, because obviously the film is set in the Marvel universe, where the characters are more important. But still, perhaps there could have been a way to make it have more heft. Just a thought.

I must say, finally, that these films make their billions from primarily the general audience, so reviews of the film must be aimed primarily at them. That's my personal thought while reviewing films based on iconic books or characters, which everyone may not be exposed to.

@Pradeep: Yes, fair point when you say that a large part of the audience is going to be the general audience. I am also included in that :-)

I myself felt exactly the same i.e. pining for more on the winter soldier when I first saw this movie. But somehow, interestingly, this movie has turned out to be on of the best in the Marvel Cinematic Universe, IMHO.

Let's hope that the other movies would continue to better this one. I'm little skeptical about Marvel deciding to make Ant Man(going to be released after Avengers 2) though. I just hope it does justice to the fan base that they have acquired.