Buddha In A Traffic Jam

Ends up being what it wants us to wake up from – a drawing room conversation about the nation's problems.

Buddha In A Traffic Jam is a callout to generation next to “do something about it” in a way that it knows. Now movies like these have the typical lines of thoughts – the powerful are ruthless, the oppressed helpless. The ones in the middle need to wake up from idle idealistic conversations and find a solution. Any movie in this genre has to offer a solution of its own. And that solution is invariably one that has the same pitfalls as many others. Buddha In A Traffic Jam is no different. Strong words, strong opinions it might use, but the result is pretty much the same.

The ones in power are afraid to give away control; the self-appointed saviors believe that their opinion is the last word, their solution is the only one and that they are right in wanting the suppressed to live their lives in only that one way. Buddha In A Traffic Jam intends to show a path that gives the power back to the common man, but without thinking it through.

Of course, no one expects a film to come up with foolproof solutions to problems that have lasted decades. But, if you want me to believe a business proposal that has no middlemen from producer to end-user, you have to give me some context of how you are going to go about it without transportation, warehousing, government taxes and so on. 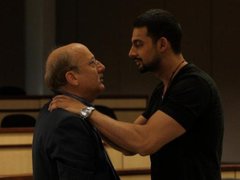 Also, the movie is setup such that it starts of with random exposure to the two Indias. Then it suddenly feels like they realised they are rambling and need to get a story in order. So, a story is thrown in. But, by then it is too late. Each character or group thereof seems to represent a real life part of the population and then a story of one person is jolted in only to go back to the representation mode of characterisation.

Sure, the ideas thrown around are interesting but there is something very superficial about the proposed implementation. Also, some aspects seem to have entered the scene to shock or just to lengthen the film. At a little less than 2 hours, the film shouldn't have felt long, but it does. A lot of it is because it comes across as propoganda rather than an attempt at making a good film.

Even so it is different from the norm. It has decided on making a point and does its best. It has its share of good performances. Arunoday Singh for example is brilliant and finally shows that he can act. His accent does come in the way, but it passes. Anupam Kher, Pallavi Joshi, Mahie Gill are all in good form too. They are all given their share of heavy-handed dialogue and they deliver those as they are meant to be – with reassured enthusiasm and conviction.

However, by focusing on strong dialogue, the writers have done nothing new in terms of the story. In some ways, Buddha In A Traffic Jam reminded me of Hazaron Khwaishein Aisi - the lead cast's name, the music, of course the disillusion of a revolution and some more.

Yes, there are 2 Indias. One is ignorant and thus oppressed. The other is educated, hopefully intelligent and thus happily inconsiderate. Both these sections are exploited by the ones in power – the politicians, the businessmen. The difference is the former is quiet and submissive while the latter is agitated but chooses to shrug it off. In some sense, the latter has a little more power to do something about their own situation and that of the ones in the interiors, untouched part of the country. At its best, I can think of Buddha In a Traffic Jam as throwing around one idea as a solution while asking for yours.

Thumbs up, by Martin D'Souza, Glamsham.com : ...Knock off the middlemen, and the tribals will be a happy lot. But are the tribal people really our concern? These and many more questions will be left unanswered as you leave the theatre after watching this 'mentally stimulating fare'. BUDDHA CAUGHT IN A TRAFFIC JAM could be you... or me! ... full review

So-So, by Sidhant Shori, Desi Martini : ...BIATJ is an interesting film at the very least. The oft ignored threat of Naxals has been brought to light in a very public manner. It’s fault lies in the fact that it’s trying too hard, and for a movie that depends a great deal on its characters to push the story forward, this isn’t a flaw that can be swept under the rug easily. It’s characters and their motives aren’t really relatable, despite being mostly well acted. Give BIATJ a watch if you’re looking to try something new. ... full review

So-So, by Johnson Thomas, Free Press Journal : ...This film has it’s fair share of high intensity and craft but the plank on which it is laid out appears to be too weak and fragile to hold strong under the weight of the myriad contradictions that spring forth here. ... full review

So-So, by Kirti Tiulsiani, IBN Live : ...To sum up, a scene from the film summarises our feeling for the film; “We love ‘Buddha in a Traffic Jam’ but we aren’t in love with it”. ... full review

So-So, by Shubha Shetty-Saha, MiD DAY : ...Even though Arunoday can barely pass off as a young student in his early 20s, he is earnest and gives a decent performance. Kher yet again shows his brilliance as an actor as you want to believe him even when he is spouting the most unbelievable, silly lines in the film. Joshi reminds us of the naturally talented actress that she is, and one wishes to see more of her.... full review

So-So, by Jaidev Hemmady, Movie Talkies : ...However, if you are done with formula films, Buddha In A Traffic Jam will surely prove to be a welcome change. ... full review

So-So, by Mohar Basu, Times of India : ...Quoting from the film, the best thing that can be said about Buddha in a Traffic Jam is that we love the ideas Vivek brings forth but we are not in love with them. It lacks outrage and treads familiar ground. ... full review

Thumbs down, by Rachit Gupta, Filmfare : ...But any and all good efforts in Buddha... are rendered pointless by the film's direction. It just doesn't have the resolve or dexterity to sway you with an argument or a stand. The supporting performances by the likes of Mahie Gill and Pallavi Joshi are listless. Even connoisseurs of art cinema will admit that after a point, Buddha just seems all up in the air. The only thing it can provoke in its viewer is ennui. Another one of those well intentioned movies that go absolutely nowhere. ... full review

Thumbs down, by Pradeep Menon, FirstPost : ...Nothing, though can redeem the film from its sheer lack of heft. We live in an age where loony fringe elements claim to be the true voice of the people of India. Vivek Agnihotri certainly doesn't seem to belong to that category. Yet, even his film claims to be a bold, different voice that represents the will of the people of India. Disappointingly though (quite like Agnihotri's debut film, Chocolate) this voice is just not different from that of the usual suspects. ... full review

Thumbs down, by Troy Ribeiro, Free Press Journal : ...Overall, with the students agitation happening all over the country, the film may appeal to the pseudo intellectuals but it does not create an impact at all as it is stuck in a jam of its own. ... full review

Thumbs down, by Sarit Ray, Hindustan Times : ...Pandit is Agnihotri on screen, naturally; the film is “autobiographical”. They’re both utterly self-convinced. We are not. ... full review

Thumbs down, by Surabhi Redkar, koimoi : ...Buddha In A Traffic Jam is a propagandist film in the garb of a political satire. It preaches more than what it can practice. I am going with a 1.5/5 for this film. ... full review

Thumbs down, by Kunal Guha, Mumbai Mirror : ...The issue with this film is not that it packs in too many issues. It's just that it has too many of its own. ... full review

Thumbs down, by Raja Sen, Rediff : ...Buddha... may well turn out to be a cult film, though not for reasons Agnihotri will like. Few films are this unaware of their own goofiness, and a lot of the absurdity is impossible to sit through with a straight face: The way Pallavi Joshi launches into the history of pottery when asked about her charitable organisation. ... full review