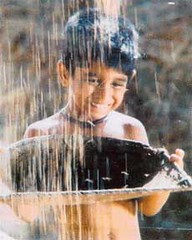 Bokya means only well and is manipulative to that end. He's a social messenger for our children and the child in us. The film though is a bit too sweet to be true.

Being kind is really not that difficult. Neither does being considerate take a whole lot of effort. And trying to put yourself in the other person's proverbial shoes will not be the end of the world. 7-year old Bokya reminds us of the goodness we carry and appreciate but also forget as we age. Like Aesop's fables, Jataka Tales, Panchatantra are some of the short stories we have grown up with. Dilip Prabhavalkar's Bokya Satbande falls in that category for many kids who understand Marathi.

It is amazing how a saccharine character like Bokya is made believable. Every time I saw him say something that sounded a bit too wise for his age, I could picture one of my kids showering me with the same knowledge using similar language. Though they wouldn't necessarily be as thoughtful they are at times as good-naturedly scheming to get what they want. And yet overt, unbelievable melodrama makes its way into the climax. And it is as trying as ever and sticks out sorely.

Interestingly while none of the actors do a wow-what-a-great job, they do make their characters immensely adorable. Little Aryan adopts a unique combination of mischief and maturity and is absolutely endearing. And you see his parents, his brother, his grandmother all knowingly and willingly giving in to his manipulation. Oddly enough, Dilip Prabhavalkar who has written the books, the TV series and the screenplay for the film came across as over-doing his bit. While I found his overacting extremely annoying, it seemed intentional because his act made every kid in the house laugh.

What makes the film enjoyable, is in a childish sort-of a way very smart. It doesn't once let the kid go out of bounds or make his actions seem unjustifiable. Bokya is naughty but you don't see him behave irresponsibly. Even if it is to cover-up something he doesn't want his parents to know, you see him confide in his grandmother. Some of the lines entertain as much as they enlighten. There are other off-handish remarks that seem funny but are a comment about society today without being sarcastic.

In movies that portray someone as overly-good, many a time the "other" party is painted a dark, dark black. There's no such attempt to underhandedly highlight the former's brightness here. And there aren't character transformations because of the "good" guy's preaching.

This is a must watch for all kids - Marathi-speaking or not. Language won't be a barrier to understand humanity. I took a couple of 7-year old non-Marathi-understanding kids and they absolutely loved it. They wouldn't stop yelling 'Boooookya Satbande' for a couple of hours after the film. And well...I won’t shy away from saying that I enjoyed it almost as much too.

Yay! Thumbs Up, by Aditi

Yay! Thumbs Up, by Bolly

Yay! Thumbs Up, by Jataka Tales : Loved it.

Yay! Thumbs Up, by shivavarun : super

Bokya (Aryan Narvekar) is a 7-year old boy who looks at the world with a lot of empathy. With this empathy he tries to do what best he can using the fairest means possible.

@Ronit @sidd tried to find out, but can't find any information on the net.