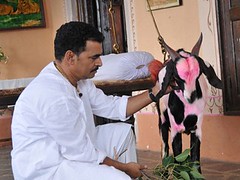 An extremely dated film with embarrassing production values, Bokad is the kind of film that may have sounded interesting to its makers on paper, but they just lacked the vision and ability to see it through. A song every time you pause to take a breath does nothing to help its cause. Please give this one a miss.

One more filmmaker realizes the difference between paper and celluloid. Pravin Raja Karale, the director of Bokad, must have felt that the script in his hand had something in it that drove him to make the film. In fact, I refuse to believe that there is a filmmaker anywhere in the world who sets out to make a film with material that he knows is absolute, universal trash. (Yes, even Sajid Khan.) It is that Tolkien-esque journey from paper to film that makes cinema the very driving force behind the existence of some of us.

Bokad has a premise that could easily have sounded convincing on paper. A group of college kids from Mumbai go on a field trip to a village, only to be embroiled in the whims of rural life and the political games that are played at the very grassroots of the gigantic pseudo-democratic edifice that controls our existence. And the village sarpanch's goat is at the centre of it all, like a mute, near-inconsequential metaphor for honour, pride and respect. Ignoring the distinct possibility that none of what I wrote above crossed the filmmakers’ minds, what the viewers end up with is a mess of a film, put together with all the ability required to set up a toddler’s game of ‘house-house’.

To make matters worse, the makers decided to go with 20 songs in the film, and I’m not even exaggerating. So one miserably choreographed song with more left feet than in all of the Western hemisphere pops up every five minutes, supposedly to ‘unfold the mystery behind the story’ [sic].

The most perplexing aspect of this film is undoubtedly the casting. The unfortunate young men and women playing the collegians also turn up as villagers, reporters and even background extras at various points in the film. I spent much of the first half believing that this was some kind of inspired cinematic decision, giving the makers the credit for doing something so blatantly avant-garde, showing the finger to purists and saving some money at the same time. Eventually however, I came to the conclusion that they were just saving money, cinematic expression be damned.

In fact, at various times I felt that Bokad was truly a lost opportunity. There was so much that could have been done when juxtaposing the beliefs and behaviour of Mumbai-based youth in a rural setting. Even something as simple as the yearning for non-vegetarian food is brought up very smartly and then squandered away. Village level politics is also touched upon, then relegated to the sidelines as the focus shifts to tomfoolery and a half-baked love story.

Sayaji Shinde and Kishore Kadam, spotted earlier in some of Ram Gopal Varma’s films, are the picks of the cast. Devious theatrics seem to come naturally to these performers, and they have the ability to hold your attention as they flirt dangerously with the boundaries of acting and over-acting. The rest of all of those who walk in and out of frames are just there, like the folded paper one would stuff under a rickety table's leg to temporarily stabilize it.

Poor writing and a mediocre cast look even worse when combined with the dated feel of the film. In all of this, it is the goat from the title of the film that gets a raw deal. Talked about throughout, the poor fellow gets barely any screen time at all. Perhaps he was used as a metaphor for this film itself. Bokad is just one of those films that will come and go without so much as a whimper.

Nay! Thumbs Down, by Shushant : Literally, one of the worst movie that one could even see. Worst music, lyrics and timing.

Literally, one of the worst movie that one could even see. I wonder how the actors like Sayaji Shinde, Kishor Kadam, Vinay Apte could sign up for such kind a film. After directing this movie, I am sure the director must have quit his job.

There are many unnecessary songs adding no value, in fact, making the experience worst. The music, lyrics, and the choreography can not be made worse even if someone attempts to compete it.

You can watch this movie on your own risk!

Shushant has given this movie a Nay! Thumbs Down(Literally, one of the worst movie that one could even see. Worst music, lyrics and timing.). Shushant has posted 1 comments and has rated 1 movies. See Shushant's page for more details.