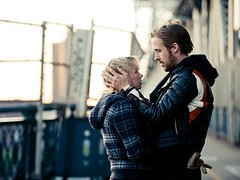 Winner of the Grand Jury Prize at last year’s Sundance Film Festival, Blue Valentine is a disturbing story about love. The non-linear screenplay captures the irony of romance - the burning passions of courtship and the frothing discontent of a marriage on the rocks. Beautifully filmed, written and enacted, I highly recommend you watch this one. If you’ve ever been in and out of love, you’ll need some tissues.

You know something is wrong between a married couple when both of them don’t share the same bed anymore.

When they don’t make their rift apparent in front of their daughter, you know that the only thing that’s holding them together is the happiness of the little girl, who neither of them would want to see grow up between parents living apart.

From the first shot itself, the camera establishes their rift with ease, as it desperately tries to capture some eye contact between the two, but finds none. It becomes very clear that for Cindy, Dean doesn’t exist. She wants him to do something worthwhile, not opt to continue as a painter, a job which allows him to drink beer early morning. Dean thinks its okay, because that’s a job that keeps him happy. That’s essentially the source of the rift - one partner wanting the other person to ‘be’ someone else and not accepting him the way he is. It doesn’t drive her to forge an extra-marital affair, but it doesn’t show her wanting to make an extra effort to make things work either. Cindy appears to be suffering silently. And despite Dean trying hard to make things work - he finds himself losing control of himself, and their marriage.

The story of their falling in love is a beautiful one and that alone is what makes their separation a little unbearable for the viewers. There is a beautiful sequence of Dean wooing Cindy, asking her to tap-dance to his music and it is one of my most lasting impressions of the film. Some scenes are so tragic, I ended up shielding my eyes. And it felt gut-wrenching because the screenplay so beautifully establishes the two characters and stitches their two tracks together - the love story and the falling out of it.

What disappointed me though, was that the film never made it clear when exactly the tensions between the two began. Was there an incident that sparked off the descent? Did Dean give up a well-paying job offer to settle for his current artistic endeavour? You don’t find answers to these questions. You’re convinced however, that he is a good father, as she is a good mother.

The film subtly makes a point about how well a child’s existence can act as a lever to balance a rocky relationship. A child is always a reminder of the passion that brought two lovers together. But Frankie (their daughter) isn’t an ordinary child. And when you see the film, you’ll know why Dean is no ordinary lover, despite Cindy’s declining interest for him.

Blue Valentine is memorable thanks to Ryan Gosling’s and Mitchelle Williams’ performances. They’ve enacted their pre-marriage romance and the post-marriage cold vibes so well, your heart reaches out to them, mourning the fall of their relationship. Both won deserving nominations for Best Actor and Actress at the Golden Globes.

What I’m sure of, is that you’ll find this film a memorable one. Especially married couples. Director Derek Cianfrance has made an outstanding feature film debut with this one. You’ll enjoy listening to him in the interview that’s the only Special Feature on this DVD.

Yay! Thumbs Up, by pv lyrics