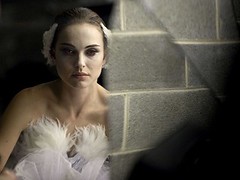 Black Swan is Darren Aronofsky’s best work and a benchmark, he may not be able beat. A nearly flawless film, it is also a triumph in terms of performance by an actress in a leading role and Natalie Portman deserves every accolade she has won for winning Best Actress at every major Awards show. The film plays out like a tragic opera -- there’s a great original score, as is the photography - making the experience totally immersive. Once this film gets over, you’ll feel like you’ve been shot. Watch it on the big screen, before it runs out of theatres.

Darren Aronofsky, the director of films like Pi, Requiem For A Dream, The Wrestler has achieved the almost perfect film with Black Swan. The flaws, even if there are any, do not seem obvious and attempts to find any, are equivalent to finding a needle in a haystack.

Based on the character of ballerina Nina, who in her quest for perfection, soon begins to lose her mind trying to play the coveted central roles in a ballet, this film is a gripping psychological thriller, from start to finish.

In the process, the director visits the human body’s fragility yet again, as he did in his previous films (Requiem For A Dream dealt with the body succumbing to drug abuse, The Wrestler dealt with a fighter’s body). Aronofsky gives life to the unforgettable character of Nina, played out by a devoted Natalie Portman, a role the actress’ contemporaries would kill for.

Aronofsky begins the film very much like a docu-drama, the camera following Nina’s character closely - a style he has polished over his previous films. I still can’t stop marvelling at how little time it took him to establish Nina’s character, shed a tear or two on her selection in the ballet, cringe every time she peeled off dead skin off her fingers and toes, nurse a wound on her cracked toenails. Graphic, disturbing and gory.

The film largely centres around Nina and Lily - one charming and graceful, and the other, who has no qualms in letting go and losing herself. Ironically, those are just the qualities Nina is required to portray in her opera performance, a challenge she becomes obsessed at perfecting. Portman’s year long training and dedication towards her role, are totally Oscar-worthy and I’m glad that it’s at least the one choice that is unanimous.

Jealousy, competition, regret, pushing the limits, fantasy - are the major threads the screenplay weaves in. But the biggest thread is that of obsession. I’ve seen people being obsessed with their looks, with their Blackberry phones or about handbags, but an artist’s obsession with perfection is something else, because it is something you work towards, laboriously. Especially, for a role so challenging, where you are required to transition from the good guy to the bad guy, flawlessly. Portman’s premise that is entirely believable, sympathetic and tragic.

And while this is happening, two parallel stories - that of Nina and Swan Lake - seem to switch sides. In her quest to perfect the character of Black Swan, Nina increasingly finds herself internalising that creature, thanks to her relationship with Lily. She becomes like an ugly duckling, rebellious and bold and meanwhile, the same character in Swan Lake longs to become like Nina’s earlier self, the White Swan - pure, attractive and controlled. Redemption happens, but on a side where you do not expect.

What makes the transition so fluid, is some consistently well-choreographed hand-held photography by Mathew Libatique. I used the word ‘choreographed’ because I realised the camera movement during the opera, was as graceful and on a tiptoe as every ballerina performing. That, accompanied with Clint Mansell’s original background score, elevate the film to new highs. The climax is a through-and-through goosebump-cum-wow sequence, riddled with twists and surprises. You’re left guessing, what next and when it all comes to an end, you murmur, “Oh my God.” I did, and I stuck, sinking myself into the film even after it was over.

To borrow a phrase from Navjyot Sidhu, Black Swan hit me like a tracer bullet. There are good films and there are bad films. And there are films which are in a league of their own, surpassing our expectations of the medium. Darren Aronofsky has made one such film.

Yay! Thumbs Up, by Johnathon Kollop : i like it

It is certainly a very strong film. A difficult one for even adults, especially who are not seasoned movie-watchers.

About Nina trying 'to perfect the character of Black Swan', just thought I'd point out that I don't recall there being a character of the nature of Black Swan in Tchaikovsky's Swan Lake. I believe that's a word play attributed to the movie's theme.