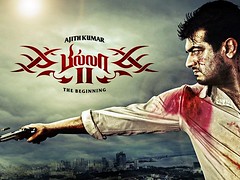 Setting out ambitiously to tell a gripping origin story of an international Don, Billa-2 ends up being nothing more than an one-sided tale of a gangster slicing every frame of the film with blood, only to shock the audience at the end by saying “it’s just the beginning”.

When you have a successful franchise in your hand that had survived three decades of viewership, any maker would want to expand the frontiers. While his counterpart in the Don series moved forward with the story, the Ultimate Star of Tamil films decided to tread a different path, that of going back in time to tell the genesis story of David Billa (the Tamil version of Don). While an original story usually stresses on the formative days of the titular character, with Billa, the urge to see the history of the much revered Don surmounts thanks to the insufficient material available on the reclusive gangster.

But five minutes into the movie, with the best dialogue of the trailer wasted terribly, I suspected dreadful times await me. As it happened, after 2 long hours, Billa-2 stood as a testament that any film, no matter how good a star it has, how tech-savvy & creative technicians are involved, will only be as good as the creative vision of the director at the helm of affairs.

The problem I had with Billa-2 is not that it couldn’t justify the hunger for violence of the protagonist; we have after all welcomed many a maniac who just want the world to burn. I didn’t even mind the fact that the film was monotonously only about the escalation of a rampant man. Hell, I could even tolerate a plump hero whip and win over his masculine enemies in a jiffy. But the issue really was about the convincing factor deployed in it.

You really can’t make an action movie with the action sequences being its weakest link. From the opening sequence fight, till the much talked about helicopter fight scene, nowhere did the violent rage that seeps out of David Billa’s face fill the screen space. As a result we are only able to see computer generated blood bursting out of the cadaver even before the knife touches it.

On the hindsight, with wonderful punch lines and some well-intended scenes that ebb out of the crevice, like a much needed crest after a long trough, Billa-2 did have its moments now and then, making me wonder why the writers couldn’t be more diligent in the work. Had the creators understood that taking the audience to the coda is as important as the coda itself.

Billa-2 sure would have been an adrenaline pumping movie. Unfortunately in its present form, Billa-2 is nothing more than the 2 hours stretched version of its 2 minutes trailer with 1 hour 48 minutes of boredom. If at all the film answers something, it tells an origin story where a plump Ajith Kumar walks all the way to become the trim & fit Billa in the 2007 film.

This article is by guest author Harish S Ram. Harish S Ram is a self-indulgent film analyst who has a penchant for translating his opinions on the visual medium into the print medium. It so happens that he resides in the brain centre of South Indian cinema, Chennai. When not pondering over films, he is a part time automobile engineer and a full-time blogger. Harish S Ram also blogs at http://harishfilmviews.blogspot.in/.

So-So, by Juan Mata : This movie is great main!

Its a clean movie... Compared to the crap movies that are getting released these days, Billa-2 is sooo good.