Borderline cute and barely horrifying, this supposed horror film is just about watchable. (Available on Disney-Hotstar)

Bhoot Police is what happens when you know you cannot make a horror film that people will take seriously. You also know your base storyline is as typical as it gets. But you have things to say that horror films don’t bother with. And you are hoping that that will be enough. It is just about if combined with watching Yami Gautam and Saif Ali Khan’sKhan’s performances towards the film’s end.

In what could have been a fun “Sholay meets Ghostbusters”, Bhoot Police becomes a horror-comedy with the usual tropes.

Bhoot Police seeks to strike a balance between “ghosts don’t exist at all” and “you better take ghosts seriously.” Usually, horror films are set up for a climactic exorcism of a feared ghost. At other times, the storyline ends up proving the ghost as a figment of a character’s imagination or a set-up by a character with an agenda. Bhoot Police wants to make a point that balances the two extremes.

This is not just balance for the sake of balance. It acknowledges that a lot of fraudsters get away with hocus-pocus in the guise of tantric magic. But it wants to emphasize that just because swindlers exist doesn’t mean ghosts don’t. By acknowledging the cheats, it manages to make the existence of ghosts more real.

This conviction kept me interested even though Bhoot Police is predictable. The two significant twists can be seen coming from a mile. In fact, with the first sound of the anklet, I guessed the first twist, even before the character was shown on screen. I wonder if the film would become a better watch if I hadn’t figured the suspense.

Other than these bits, Bhoot Police tries its hand at witticism in the form of cultural and political references. The jibes and quips bring smiles and keep you engaged with the film owing, but are unlikely to stick too long after. The wrong one is likely to stick, though. One in which Saif Ali Khan’sKhan’s character takes a dig at Jacqueline Fernandez’sFernandez’s characters for wearing skimpy clothes. It felt more like a comment on what the woman was wearing than what the man was watching. 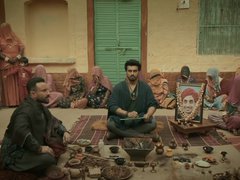 Fortunately, I didn’t spot any other derogatory remarks. Some comic bits are executed with cuteness by Arjun Kapoor and Saif Ali Khan. But there are other times when everyone on screen seems to overdo their act, especially Saif Ali Khan’sKhan’s goofiness. It was a pleasant surprise to see Late Amit Mistry, though.

In what could have been a fun ““Sholay meets Ghostbusters””, Bhoot Police becomes a horror-comedy with the usual tropes and a promise of a sequel. To keep interest in a franchise, though, it will need to do much more than being just passable.

So-So, by Russel D'Silva, Bollywood Life : ...The best part of Bhoot Police is Saif Ali Khan and how he, along with Arjun Kapoor, and the tropes used by Director Pawan Kripalani, make the horror-comedy almost seem like a desi, live version of Scooby Doo. Sure, the jokes and slapstick moments could've landed better, especially in the first half, and the entire movie could've done with more chills, but there's an overall spooky vibe and innocuous-fun feel to the proceedings that make it a decent one-time watch, largely helped by some good VFX. I'm going with 3 out of 5 stars.... full review

So-So, by Devesh Sharma, Filmfare : ...All-in-all, Bhoot Police is a clean comedy devoid of potty jokes and sexual humour. It doesn’t scare you much but will certainly make you laugh. It’s set up for a sequel so be prepared to follow the further adventures of Vibhooti and Chiraunji.... full review

So-So, by Madhuri V, Filmi Beat : ...To keep the film short and crisp, the makers have refrained from adding any songs to Bhoot Police and that works in their favour. Albumwise, 'Ayi Ayi Bhoot Police' is a decent party number. 'Mujhe Pyaar Pyaar Hai' isn't memorable enough when it comes to a romantic song.... full review

So-So, by https://timesofindia.indiatimes.com/web-series/rev, india today : ...Saif Ali Khan has a remarkable screen presence and it is his dialogues that keep you entertained throughout. His one-liners are enough to crack you up. You will enjoy his antics but certain parts feel redundant. It is Saif’s impeccable comic timing that gives the film its much-needed edge. Arjun Kapoor as Chiraunji is more of the serious type - the innocent and righteous sibling. Arjun and Saif have the maximum screen time, but the latter manages to snatch the spotlight away each time. Arjun struggles but makes an impression. Yami is good, but of course, we have seen her play better. Yami as Maya is this determined daughter who is bent on saving her father’s legacy, the tea estate, from being lost. Jacqueline Fernandez plays Maya’s sassy influencer sister Kanika, who wants to sell everything off and move to London. The actress has a forgettable appearance.... full review

So-So, by R.M. VIJAYAKAR, India West : ...“Bhoot Police” is a decent watch and can also be enjoyed with the family. Kids too will find it pretty amusing with the right dose of “scare” for them.... full review

So-So, by Shubhra Gupta, indian express : ...But while it stays in the let’s-make-fun-of-ghosts zone, it really is funny. Especially when Saif is on song, which is quite often: he is having a blast, and makes sure we do, too. Arjun Kapoor fits the part too, as do the girls. What’s truly a saving grace is that nothing gets too dark. And no one takes themselves seriously at all, even if you feel like ruffling Ms Fernandez’s perfect blowout: there’s a ghost in front of her! But it does get too long. At one point a character says, ‘enough of this horror show’. True, true... full review

So-So, by Shreya Mukkerjee, NewsBytes : ...Bringing the age-old horror movie logic that the ghost is actually good, when you sit to analyze Bhoot Police, your head will hurt. Hence, analyzing is not the answer. Even with numerous loopholes, the movie makes you laugh senseless. The final twist is apparent from miles away but again, who cares. It's no Stree but you will still enjoy it thoroughly.... full review

So-So, by JOGINDER TUTEJA, Planet Bollywood : ...Eventually, Bhoot Police doesn’t aim to establish itself as a memorable film but what it does well is to be good fun while it lasts. Play it on for a lazy evening out with the family.... full review

So-So, by Namrata Thaker, Rediff : ...Bhoot Police had a lot of potential, but the makers have ended up making a horror-comedy which is not too funny, hardly scary and quite frankly, quite missable.... full review

So-So, by Stutee Ghosh, The Quint : ...Saif is solid and Bhoot Police puts us in a particularly forgiving mood where the lulls don’t ruin the whole film for us. Harmless fun is always a good idea.... full review

Thumbs down, by Deepa Gahlot, Deepa Gahlot : ...It is left to Khan and Kapoor to enliven the proceedings with their bickering, and there’s a too-brief cameo by Jaaved Jaaferi as a cop hot on their heels of the conmen; they do their best, but it’s not an easy task to beat such dreariness. The two male leads speak in a rustic lingo (Pleej, ij), but because they are stars, they are allotted a rather stylishly grungy wardrobe... full review

Thumbs down, by Rahul Desai, Film Companion : ...The irony is lost upon the makers. Then again, some pop-cultural humour – like Saif looking at a sheepish Arjun when someone declares that “nepotism has ruined the country,” a running joke about juice (“How’s the juice?”), and a mandatory demonetisation dialogue – seems to be enough these days. After all, if a mediocre film is self-aware, it’s not really mediocre, right? Right?... full review

Thumbs down, by Anupama Chopra, Film Companion : ...He lumbers along, as does the film, for more than two hours. Watching Bhoot Police, I realized that a film which is mediocre is more soul-sucking than one that is actively awful because you see glimpses of what might have been.... full review

Thumbs down, by Shantanu Ray Chaudhuri, Free Press Journal : ...The actors are clearly having fun, and some of it rubs off on the viewer too. Saif Ali Khan, in particular, is a breeze — with his love for episodes of Naagin, demanding a GST for his services or even going ‘I see dead people!’. Arjun Kapoor provides able foil. But one can never get over the feeling that one, the material is too thin for a two-hour-long film; two, the actors are not earthy enough for the characters they are playing.... full review

Thumbs down, by Renuka Vyavahare, Times of India : ...While almost everything fails, the only comedienne, who truly makes an impression here is Johnny Lever’s talented daughter Jamie Lever. Her character singing Aishwarya Rai’s dreamy romantic number ‘Aao Na’, while her husband struggles to take a dump has you rolling with laughter. If you must watch this film, watch it for her.... full review

Dear Meetu, nice review, gives a decent read.. Looks like the Bollywood directors were inspired by zillion Ghost comedies in South that are doing good business.. Good thing is - this is not a remake..!

Raj has given this movie a Not Interested in Watching(Good that it is not a remake). Raj has posted 99 comments and has rated 67 movies. See Raj's page for more details.