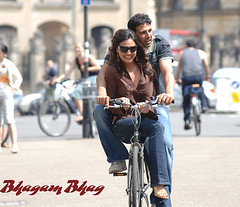 I forgot…I knew it was a Priyadarshan movie…and yet I forgot to carry cotton to stuff my ears. Of course, everything was just too loud, as expected. Not to mention the added bonus I would have received, of not having to listen to the oh-so-pathetic dialogues.

What I didn’t forget though, was that Priyadarshan mentioned in one of his interviews, “No one with brains should watch Bhagam Bhag”. Honestly, I listened to him, I had left my brains home. Believe me, I was not looking for logic in a single scene, let alone in the movie as a whole. I didn’t realize that I was not to look forward to a few good laughs from a comedy! The absurdity of it all does not make you laugh either.

I refuse to accept that the audience is expected to laugh at Akshay Kumar’s face stuck between two half-naked hairy butts. The only line that made me laugh hard was the dig Bunty (Akshay Kumar) takes at Akshay Kumar the real-life actor. And I had a smile in one of the other very forgettable scenes between Akshay Kumar and Govinda. That was my laugh and a half. No amount of decent acting by Akshay Kumar, Govinda, and Paresh Rawal’s could save the movie.

The train of thoughts going through my mind while watching the movie….Can’t blame the dialogue writer if he has to try and find some way of doing justice to a shoddy screenplay. Almost any of the sub-plots could be cut-and-pasted in any order and we would have a similar product….But, how can it be the screenplay’s fault if it has to contrive and adjoin five stories that have nothing to do with each other?....Nope, certainly cannot point fingers at the director if he has zilch to work with….Oops.…they are all done by the same people – dialogues, screenplay, story (ies), direction….Hey! The audience is supposed to be dumb, not the makers. With all the control, they surely are capable of coming up with something better.

This is one of those rare movies where you wait for a song, however irrelevant. You just want the characters to stop talking! Indeed, the songs were a welcome relief. ‘signal’ and ‘tere bin’ have good music. Sameer has added a new set to his list of rhyming words ‘afreen – nazneen - dilnasheen’. As always, the words that come before and after the rhyming words do not matter.

It is exasperating when you cannot enjoy a movie even if you give your brain a vacation. Such movies don’t make me laugh, they make me angry!

Thumbs up, by Sameer Wadekar, Glamsham.com : ...In BHAGAM BHAG too his inimitable touch never goes out of sight.... full review

Thumbs up, by Langda Tyagi, MovieWalah : ...if you get past the bit stale formula, the one liners and the situations are pretty hilarious... full review

So-So, by Nikhil Kumar, Apun Ka Choice : ... It entertains you for three hours and leaves you with smiles... full review

So-So, by Deep, Deep's Home : ...The ending was kind of anti-climax and things just were not in place... full review

So-So, by Taran Adarsh, IndiaFM : ...but it provides ample laughter and entertainment in the final tally... full review

Thumbs down, by Baradwaj Rangan, Blogical Conclusion, The New Sunday Express : ...made with the supposition that brain-dead films are the same as brain-dead filmmaking... full review

Thumbs down, by Subhash K Jha, Sify Movies : ...a pesky penchant for a prattlingly pronounced parody that goes around in a dizzying circle... full review

Thumbs down, by Nikhat Kazmi, Times of India : ...There is nothing to keep the laughter flowing... full review

Nay! Thumbs Down, by Hindilyrics4u.co.un

i love akshya's commedy he is such a good actor and the movie is too good i like it.

Dude can you tell in which scene Bunty takes a Dig on Akshay?