It seems impossible that a film could be bigger and better than The Avengers, but Joss Whedon’s follow up, Avengers: Age of Ultron, delivers and how! Always bitingly funny; sometimes scarily dark; and never once dipping in terms of just how much information it feeds you, Age of Ultron is a big film to absorb, but worth every minute of it.

When Avengers: Age of Ultron was announced, the biggest question fans would have had is, ‘How does one top The Avengers? How does one even match something as insanely fun as that, never mind surpassing it?’ The immediate pressure on writer-director Joss Whedon, of course, would be – how does he begin this next film, after that gargantuan extended climactic battle set in New York.

Hardly any film has landed in theatres with the kind of expectations loaded onto it, as Age of Ultron has. Whedon, though, doesn’t merely beat the expectations – he subverts them, does his own thing, and trumps it by creating a film that goes past the first film in just how grand and stunning it is. He does this from the get go, with a jaw-dropping opening sequence featuring all the Avengers appearing one after the other in a single take ultra-action shot, choreographed to gobsmacking perfection. From there, the ride only gets crazier.

The elements that made the first film fun are all there – the all-star lineup; beautifully etched characters that bounce off each other through rib-ticklingly written snark masquerading as dialogue; the push-pull magnetism of these characters stretching in every direction to create a harmony between what they do and what they say; and of course, outrageous action set pieces that keep you hooked every second. Whedon quite simply pulls off a bigger, more complex film that doesn’t only broaden its scale, but which also travels deeper into the characters and opens them up from the inside. 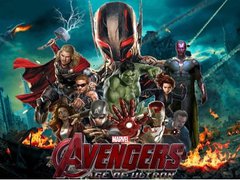 You see, this time they have a different adversary to contend with, when a brainchild of tech genius Tony Stark (or Iron Man, of course) that was meant to save the world becomes sentient, intelligent, and decides that the world is safest without the Avengers in it. Ultron comes to life, and the Avengers have to deal with an enemy born on the inside. To make matters harder, Quicksilver and the Scarlet Witch enter the fray, as they bring with them powers that seem the Avengers are no match for.

The plot of the film is rather basic – a bad guy ascends and becomes increasingly powerful, until there is a big climactic faceoff between him and the ones who want to save the world from him. In that sense, those expecting to be blown away by ‘story’, may end up disappointed. Whedon’s genius really lies in how he manages to make such a hugely mounted film an intimate experience as well. The emotions the film plays with, the deep dark fears that pervade even the best of hearts, the element of sacrifice, of choosing to be a hero because you have the ability that others don’t, and so you also have the responsibilities that others don’t – these are all primal and elemental. Observing how he weaves these with this set of characters is a true joy to watch.

So the Hulk and Natasha Romanoff have an interesting dynamic going on between them, even as Iron Man and Captain America haven’t ceased taking jibes at each other. Things get even more interesting as the Avengers deal with the twins Quicksilver and Scarlet Witch, particularly as the latter has the ability to play tricks on their minds.

It may not look it, but Age of Ultron is a dark film. Dolled up in the Marvel glitz, it never seems to slip into DC’s brooding Nolan-esque interpretations of a superhero (which first enthralled audiences, and now seems to draw their ire). No, Age of Ultron is very much a Marvel film, with all their staple ingredients, and it fits nicely into what has been seen so far in the Marvel cinematic universe, and what is coming up from them.

In the Marvel cinematic universe, the ultimate battle of the Avengers will be with Thanos, who had appeared briefly in the mid-credits scene of the first film. So Age of Ultron is only a pitstop in the larger scheme of things. But Whedon ensures that Age of Ultron is a finite film in itself as well, because even as it sets things up for the next few films, it also has its own ending. When Age of Ultron ends, it feels like something has ended; that things will never be the same after this.

This will be Joss Whedon’s last film at Marvel for the time being, so he makes sure that it ends on his terms.

His framing and cutting are downright impressive. Sample this: Quicksilver, who can run at blinding speeds, is just about to engage in battle. As he preps himself, he reaches for… sports shoes. In a shot that doesn’t even last one full second, we see a stack of shoes of a popular global sportswear brand, before he one of picks them up. Aah, product placement, Josh Whedon style. Even the manner in which Whedon looks inside the minds of the Avengers – with expressionist montages cut with mind-boggling panache, is a big departure from stock Marvel films.

Rarely has a film managed to keep the sustained pace and energy that Age of Ultron has. Even when it slows down to bring us closer to the characters, you’re still continuously bombarded with information (and, of course, delicious humour). In that sense, the film almost has a monotonous graph. It can get a bit too much to handle at times, but that’s only because Joss Whedon has under 150 minutes to leave his final imprint on the Marvel films. And boy, does he deliver in style.

Age of Ultron is intense, spectacular and supremely fun. I’ve never subscribed to the theory that films are merely entertainment, but if films have to be entertainment, then Whedon shows the world that this is how it’s done.

Yay! Thumbs Up, by Anup : Entertaining but not to be Remember for long time.

Nay! Thumbs Down, by Anuj

true that i enjoyed this one alot
but didnt find it close to the prequel.
and the darkness shown by the film was not dark enough. Yes i like DC's approach much more interesting then Marvel. Not just the Dark Knight series but also Man Of Steel was great. There should be depth in the plot. Entertaining jokes and Grand(great) action sequences cant compensate for that. They only can glue you to the seat until the movie ends , but doesnt force you to remember the movie after that. At least Marvel could approach like Mathew Vaughan has done in case of X Men First Class , then again Mathew and Joss are two really different directors.
The Avenger has shown something new by bringing , together so many famous Super Heroes , AGE OF ULTRON haven't done anything new , just used the tried and tested formula again(like you said the story line was pretty regular) . But Marvel cant go much distance without any innovation.
M expecting Batman Vs Superman for being better.

Anup has given this movie a Yay! Thumbs Up(Entertaining but not to be Remember for long time.). Anup has posted 437 comments and has rated 108 movies. See Anup's page for more details.
Gokul

Promised and Delivered a fun 2.5 hrs at the multiplex.Marvel has done a fab job if a guy like me who hasn't touched a comic in my life knows about characters like Rocket Racoon and Vision.Looking forward to Ant-Man.

How to make a Hollywood sci-fi film : Some non existent scientific techniques + some mathematical extrapolation + some American jingoism & war mongering punched in with the basic theme being "The world coming to an END", & there we have a pile of rotten tomatoes indeed!

Anuj has given this movie a Nay! Thumbs Down. Anuj has posted 1145 comments and has rated 126 movies. See Anuj's page for more details.