Preachy, but about a situation that many of us might need schooling for. Series of debates and monologues are sewn together to ensure the rest of the country knows that they don’t know the lived reality of fellow citizens from the seven sister states. A stimulating 2.5 hours followed by a killer of a 3-letter word climax that summarises the attitude at the root of the problem.

In its quest to discern the meaning of identity, peace, and all things that come along, Anek morphs into a dramatised philosophical documentary. Once you are open to that experience, though, Anek has the potential to invoke thoughts that you and I would want to mull over. The film might not have many new arguments for those who think about racism and discrimination against an oppressed class. But you can see your head nod in agreement. The hope is, I assume, that those of us who don’t think any wrong is being done can catch a glimpse of the other side instead of just hearing it in a drawing room debate.

They want you to think about the situation and formulate your opinion. And that they do.

Many of us who have had these intellectualised discussions know that those who disagree aren’t really heeding logic or reason. So, while Anek’s philosophisation rings true, it is likely to fall on deaf ears. Do people who participate in calling North-eastern Indians derogatory names in real life under the guise of ‘just joking’ want to think about the essence of being an Indian or the true sense of ‘peace’? Aren’t these people the film’s true target audience?

Even so, those of us who are on the same side as Anek can look forward to some powerful lines that make our arguments about concepts such as diversity, democracy, republic, constitution, peace, citizens’ voice and more. Of course, the film makes snide yet subtle comments on contemporary politics which bring a wry smirk. The taunt in the form of the car license plates made me let out the loudest of my cynical laughs. And even the name of the protagonist is sarcasm done as well as it can be.

The characters are all representatives of the group they belong to. From the teenager who is drawn towards the fight his brothers are fighting to his mother who just seeks a simple life; from the lead lady character who wants to do the right thing from her point of view to her father who is the new separatist leader; from a special agent who sees that the government he is serving is not really helping the people they are meant to work for to the politician who has had a taste of his own medicine and wants to pass it on—all characters are symbols of everyone who has similar views. It is not any one person’s story. This is why Anek comes across more like a lesson than a film.

Given that the film isn’t character-driven, all the performances feel like they are in place but not necessarily making you feel for the character. Together, they want you to think about the situation and formulate your opinion. And that they do. 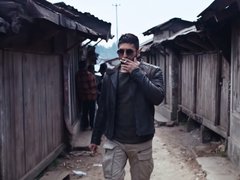 This is taken a step further, becoming even more meta. The film points out the conceptual similarity of the political trouble or separatist movements across the country. And the basic fact of current politics that no one who has power, no one who is in control, wants dissent and cares little for the common man.

While Anek presents the circumstance of North-Eastern India, I am sure it only scratches the surface. There is no way a 75-year history of ‘he-did-she-did’ can be translated into a 2.5-hour film. That, too, one that wants to show a gruesome civil war of sorts that the region has been going through since India’s independence from the British. The war scenes are many and horrifying. These sequences even come across as those belonging to films that are solely about war, stretching the fights, accentuating the pointlessness of it all. But Anek is attempting to be more than that.

Catch a glimpse of the other side instead of just hearing it in a drawing room debate.

Yes, it is wishful thinking that minds will change with what a film says. But what else do we have other than hope? Else, many of us know the conclusion of such arguments, and the film brings it out beautifully with literally one last word—a climax that is now one of my favourite ones.

Thumbs up, by Subhash K Jha, Bolly Spice : ...Anek parks its angst at the dead-centre of ambivalence. It has neither the patience not the bandwidth to explain the volatile situation to the conflicted characters, let alone to the audience. This is a film that demands an educated literate audience which can tell the difference between Pure Cinema and its hybridized films that flood the movie theatres these days.... full review

Thumbs up, Economic Times : ...Anek is undoubtedly another conscious-keeper creation by Anubhav Sinha that compels you to think about justice and equality based on religion, gender, castle and now region. While the subject is exciting and unique, the representation could have been done with more subtlety. In contrast, the movie is a tad slow in the first half but comparatively fast-paced in the second half. Due to a weak narrative, the film leaves the audience with so many unsettling questions Read more at: https://economictimes.indiatimes.com/news/new-updates/anek-movie-review-another-unsettling-thought-providing-socio-political-drama-by-anubhav-sinha/articleshow/91833649.cms?utm_source=contentofinterest&utm_medium=text&utm_campaign=cppst... full review

Thumbs up, by Devesh Sharma, Filmfare : ...Watch the movie for all the ugly truths it explores and for the inspired acting of the ensemble cast.... full review

Thumbs up, Times of India : ...The film is engaging, but it could have done with a tighter screen time. It’s a tad slow pre-interval and comparatively fast-paced post that, and unpacks a lot in that timespan.... full review

So-So, by Madhuri V, Filmi Beat : ...In a crucial scene, when Aido discovers a startling truth about Joshua, she rebukes him harshly and exclaims , "What a waste!" Those words also sum up your disappointment as Ayushmann Khurrana's Anek falls short of being a powerful voice unlike his previous collaboration with Anubhav Sinha (Article 15).... full review

So-So, by Punarvasu Pendse, fullhyd.com : ...Anek is a beautifully shot film about a very real topic that most Indians are often clueless about. What lets it down is its reluctance to flesh out its storylines, instead settling for a middle-of-the-road approach that shies away from taking a stand. Still, worth a watch to understand Northeast India, especially when we can't think of a single mainstream film that does so.... full review

So-So, by Manjusha Radhakrishnan, Gulf News : ...But if you are looking for solid performances by seasoned actors like Khurrana, Pahwa, and Mishra, then you will find a lot to enjoy in this film that takes a lot of time to get to the meat of the issue. But at times, you feel this provocative film cuts too close to our bone.... full review

So-So, by Sameer Ahire, Movie Talkies : ...Anek makes it two in a row. First, it's Sinhaa's writing at fault here, then it's direction. Anek seems so clueless and off track for more than half of its runtime that you can't make head or tail of it. The new characters suddenly come into the picture, some suddenly disappear, and most of the time, it's the linear equation that seems lost.... full review

So-So, by NAVNEET VYASAN, News18.com : ...The screenplay lags at many points. The first half may leave you twitching at your seats. Nevertheless, Sinha manages to pull you back in the second half, to an extent, somehow. A rare feat. Perhaps, what catches your attention is the authenticity that he stresses on. The characters are real and rooted. The questions that they ask are pertinent.... full review

So-So, by Yvonne Jacob, NewsBytes : ...The representation of real events is commendable; so is the authenticity in terms of casting actors from the North East. It all adds a genuine touch to the film's context. The cinematography is well executed with brilliant but limited shots of the Seven Sister States. Overall, Anek is a decent attempt at an action film and religiously puts its agenda forward.... full review

So-So, by Sukanya Verma, Rediff : ...Anek is more credible when it lets the power brokers of Delhi conduct dirty business as usual. They are not exceptionally written, but in the skin of Manoj Pahwa and Kumud Mishra, they gain nuance if not complexity. Pahwa's Abrar, a Kashmiri Muslim often likening the NE situation to the Kashmir situation, oscillates between hostile and hardened. No matter what direction one looks in, there's no country for people's voices. Not in five years, not in 75.... full review

So-So, by Swati Chopra, The Quint : ...The director uses a powerful scene to say that there are no winners in a political battle, unless you are the one wielding the power.... full review

Thumbs down, by Nandini Ramnath, Scroll.in : ...Anek makes a big pitch for diversity in representation – best represented by Aido, who wants to participate in tournaments wearing the colours of the country seen as crushing her people. Yet, Anek opts for the age-old trick used by films set outside the comfort zone of the average mainland Hindi viewer: elision.... full review

So-So, by Raj : Tried too much in 150 minutes without audience's "connect"

Dear Meeta, Meeta, Meeta, Irrespective of thousands of reviewers - prominent and self-critics, I always come here to you to read your opinion, because I know - you see the movies with the correct feel. Wogma is the BEST for review, and I have been here with you in this 15+years of journey. Thank you Meeta for giving us your own wonderful insights into the world of movies.
ANEK is a complex story of NE about a failed state caleld INDIA , drawing close parallels to Kashmir in terms of AFPSA, insurgency, terrorism etc.
Many people who have reviewed the film negatively is because unlike J&K - NE has been out of the media narrative since decades.
For people like us who are little aware of NE issues - for them too - to fit the nuances of political gamut of issues in 3 hours is difficult.
Anuhhav Sinha tries to take BOLD contemporary issues, but I find - he carries this baggage of him of thinking about himself as an INTELLECTUAL - I know it all attitude.
Even for him it was difficult to clearly show India as a failed governing state, which was and is actually the case.
His narrative style as you rightly pointed out is documentary style and how we wish and miss makers like Mani Ratnam and Shyam Benegal who are masters to tell a story that connects with its audiences..
Thanks Meeta again. Looking forward to more reviews from you.

Raj has given this movie a So-So(Tried too much in 150 minutes without audience's "connect"). Raj has posted 93 comments and has rated 61 movies. See Raj's page for more details.
meeta

Thank you so much :)