A spoof that doesn’t rely on slapstick comedy! Yet, doesn’t engage with the details. Sincere and believable performances, an interesting basic plot, and a few quips are the big-picture plusses.

The pulp genre has room to stretch imagination in all directions and planes. Coincidence is usually forgiven here. It is thrilling and most-fun when the story happens in a couple of days. It has smartly written lines and slick execution. An Action Hero has all the markings of a good pulp film—but it feels like it is being held back.

An Action Hero leaves you with ‘wanting more’ feeling. But for what it could have done rather than what it did.

The one-line description offers a broad canvas—a Hindi film star lands in a soup that keeps getting thicker, digs a hole to drain the soup into, only to find the hole getting deeper. An Action Hero manages the broad strokes well, setting the audience up for a fun ride. Especially, because it is spiced with a dash, or few, of spoof and goof.

Unfortunately, it stays at that. For instance, not all the dialogue has spark. The few witticisms that sound cool, only reveal the superficial approach to the lines. After all, ‘spiced truth is going to be bitter’ seems chic at first. But, neither does it hold strong when you think about it, nor does it make sense as an analogy beyond the surface level.

Similarly, the film wants to deliver a commentary. A commentary on stars being put on a pedestal, media trials, the show of power by small-time politicians, the dynamics and relevance or lack thereof of the underworld. Its protagonist, Maanav (Ayushman Khurana) is a haughty, popular film star who takes pride in being socially responsible but is reduced to dancing at parties. The satirical spoof of the entire spectrum in the media, the medial trial and its draw to TRP are too obvious. Likewise, you don’t have anything unexpected in the remarks about politicians or the underworld.

Sure, some of the stuff works. Like the snide remark on the political situation in the country works; or henchmen telling an actor about their love for their job bring a smile. But other stuff falls flat under the guise of being goofy. For example, the weird mockery of the beard and cinematographers make it look like an inside joke that isn’t meant for the viewers. 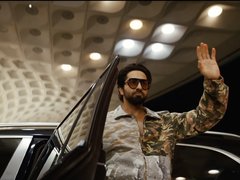 What you have then is some decent action choreography and earnest performances. I especially enjoyed the first chase sequence in London that looked like it was stylised based on Super Mario. After a while, though, the action gets repetitive, making you wonder how the character who is playing an actor goes about wilfully committing murder without remorse like it were his day job.

From Ayushman Khurana to Jaideep Ahlawat, including Harsh Chhaya and Gautam Joglekar, the performances do their best to keep you engaged and believe the pulpy situation imagined. Even Akshay Kumar gives his best performance to-date in his cameo. Well enough for me to mention a special appearance, something I usually avoid. Yep, there is no room for women here. 🤷‍♀️

An Action Hero manages the broad strokes well, setting the audience up for a fun ride. Especially, because it is spiced with a dash, or few, of spoof and goof. Unfortunately, it stays at that.

An Action Hero leaves you with ‘wanting more’ feeling. But for what it could have done rather than what it did. A little more chemistry between Maanav and Bhoora, a little more insight in the dialogue and situations, a little more meaning to the action, and so on.

Thumbs up, by Subhash K Jha, Bolly Spice : ...he comments on media trial and the demonization of Bollywood are hilarious. This is a clever intelligent film that sometimes trips over in self-admiration but manages to stay afloat most of the way.... full review

Thumbs up, by Prathyush Parasuraman, Film Companion : ...An Action hero, they don't even try. Instead all that expectant sexual tension is thrown at Maanav and Boora wondering. if these two people who just want to get at each other's thouats, will, eventually, find reasons to hold hands, and not twist them, instead.... full review

Thumbs up, by Devesh Sharma, Filmfare : ...Kudos to Anirudh Iyer for making a witty and clever film, keeping a healthy mix of satire, action and comedy to keep one entertained throughout. Cinematic liberties have been taken for sure and the treatment is definitely over the top. But as long as one keeps smiling, who's complaining.... full review

Thumbs up, by Anna MM Vetticad, FirstPost : ...Ayushmann has had an uneven 2022 so far with Anek and Doctor G. An Action Hero is an excellent showcase for him. He revels in the silliness that the script sometimes throws his way, but cleverly makes silly look serious. Even when the film lags, Ayushmann does not.... full review

Thumbs up, by Rohit Bhatnagar, Free Press Journal : ...An Action Hero might derail from the set formula concept, but it might entertain and delve deeper into world affairs.... full review

Thumbs up, by Monika Rawal Kukreja, Hindustan Times : ...Watch An Action Hero for some brash and raw action, and if you enjoy cat and mouse chase, you would find this crazy ride equally funny.... full review

Thumbs up, by Umesh Punwani, koimoi : ...All said and done, this is a ‘bring your brain to the theatres’ film as even though this is a masala entertainer, it’s not mindless at all & Ayushmann Khurrana steers in the right direction!... full review

Thumbs up, by Uday Bhatia, Live Mint : ...An Action Hero is a sly, nimble thriller, as unimpressed by Bollywood as it is scathing about the people who hate it.... full review

Thumbs up, by Saibal Chatterjee, NDTV : ...An Action Hero bustles with coiled energy every time Jaideep Ahlawat is on the screen as a toughie responding to a rough, ready and rustic notion of justice and self-worth. An inveterate scene-stealer, the actor keeps the 'action hero' Ayushmann Khurrana on his toes. The two principal performers lend the movie some of the power and energy that it requires to keep firing on all cylinders. The rest is provided by the canny screenplay and the directorial panache.... full review

Thumbs up, by Sonal Dedhia, News18.com : ...This isn’t a great piece of cinema or anything but it doesn’t pretend to be one either. It sets out to be an absurdly funny, unpretentious crime comedy and it totally lives up to that hype. An Action Hero is wacky, breezy, bizzare, outlandish and yet makes a statement.... full review

Thumbs up, by Himesh Mankad, Pinkvilla : ...An Action Hero is an intelligently written action thriller, wherein the director follows his conviction to strike the right balance in the genre with some humor and whacky scenarios. The conflict does get repetitive in the second half, but the finale saves the day for this Ayushmann Khurrana film. It’s definitely Worth-A-Dekho this weekend.... full review

Thumbs up, by Anuj Kumar, The Hindu : ...However, it is Jaideep who sets up the pace of conflict with a pitch-perfect performance of a wrestler-turned-politician, fuelled by caste pride. Jitender Hooda is equally impressive as the slimy local police officer serving the interest of the local star. Watch out for the scene where Jitender questions a DOP’s contribution to society, which is a hilarious social comment on the region. The conversations between Jaideep and Jitender sets the pace for this off-roader.... full review

Thumbs up, by Pratikshya Mishra, The Quint : ...An Action Hero makes fun of everything it can get its hands on while weaving a story worthy of its strong cast. Jaideep Ahlawat remains an actor who steals the scene every time and Ayushmann is still a star who knows how to keep the audience watching.... full review

So-So, by Anindita Mukherjee, india today : ...All in all, if you are in the mood for some mindless action and wish to see Ayushmann perform car chases and action sequences for the first time (and the chiselled body), you may still give the film a shot. And all you Jaideep lovers, this man nails it, yet again. However, if you plan to book An Action Hero tickets thinking of it as yet another hatke Ayushmann film, we would ask you to pause and give it a second thought.... full review

So-So, by Ridhi Suri, India TV : ...Overall, the film is a decent blend of satire, comedy, action and hilarious punchlines! The combination of some really good action, and situational comedy makes 'An Action Hero' an engaging watch.... full review

So-So, by Shubhra Gupta, indian express : ...we want the action heroes to only do what they do best: kick and chop their way through a throng of baddies. Those little moments when nothing much is going on slows down the proceedings, and prevents this one from being a total humdinger. That also goes for a song-and-dance sequence featuring the very svelte Malaika, who shares a terrific raised brow moment with our hero.... full review

So-So, by Mayank Shekhar, MiD DAY : ...The pre-interval portions, being the set-up; it’s total payoff, after. This leap of imagination lands nowhere after halftime — once the hero himself starts getting deeper and deeper into shit. As does the film, with no way to get out of it too. Full respect for the dive/effort though.... full review

So-So, by Sameer Ahire, Movie Talkies : ...An Action Hero would have been a solid debut for him. Nevertheless, it’s a decent film that has unnecessarily gone into the exaggeration zone.... full review

So-So, by Sukanya Verma, Rediff : ...An Action Man simply cannot decide whether his objective is vendetta or voicing fan-star obligations. Any time an opportunity for some exciting existential conversation between these two men, as two sides of the same coin, presents itself, Iyer opts for a less complicated chase-and-combat routine.... full review

So-So, by Nandini Ramnath, Scroll.in : ...An Action Hero careens out of control after a superbly taut beginning and begins to resembles the anything-goes movies that have earned Bollywood a bad name. An allegory about post-truth and fake news in present-day India emerges on the horizon, which simultaneously weakens the man-on-the-run thriller and gives the film higher purpose... full review

So-So, by Archika Khurana, Times of India : ...Nora Fatehi and Malaika Arora's dance numbers to reprised versions of 'Jehda Nasha' and 'Aap Jaisa Koi,' respectively, bring in the dose of oomph factor. The background score complements the ongoing drama and establishes the tone of the film.... full review

Thumbs down, by Sushmita Dey, Times Now : ...In a nutshell, just imagine two talented and versatile actors in an action film with a bad plot!... full review

Pulpy fiction, that finely sums up the movie..

Raj has given this movie a So-So(Pulp - doesn't go deep..). Raj has posted 99 comments and has rated 67 movies. See Raj's page for more details.
meeta