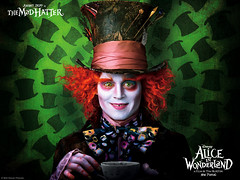 You might actually be surprised to know that Alice in Wonderland is probably not for kids. Tim Burton adapts this classic tale and takes you down the rabbit hole where you went as a kid. That world however is dystopic and almost without hope. Alice is destined to change that… and her self.

When I entered the movie hall to watch Alice in Wonderland, the entire row behind me had children presumably between the ages of 3 and 14. By the time I turned around during the interval most of them had left the auditorium and most of the others who were left behind were somewhat bored. It seems that the book I read as a child was made into a film that wasn’t necessarily for children. Of course the book itself had far too many socio-political implications that I was to learn of much later in my life. But Tim Burton’s Alice in Wonderland unapologetically reflects the cold dystopia we live in. As a matter of fact it does so in an exaggerated fashion that leaves you somewhat out of sorts when you leave the theatre.

Burton moves away quite a bit from the original plot of Lewis Caroll’s classic tale. It follows a 19-year-old Alice who returns to the magical place (called Underland) only to be told that her true destiny is to kill Jabberwock a fierce creature and end the rein of the Red Queen.

Tim Burton makes Alice out to be some sort of a champion on whose decision the fate of ‘Underland’ rests.

Tired of being told what she should do, not wear and who she should marry Alice (Mia Wasikowska) follows the White Rabbit (voice of Michael Sheen) down the rabbit hole and finds herself in the company of Tweedledee and Tweedledum (Matt Lucas with a little help from animation guys), the Cheshire Cat (voice of Stephen Fry), the Dormouse (voice of Barbara Windsor) and the March Hare (voice of Paul Whitehouse) among others.

Leading this insane menagerie of course is the Mad Hatter (Johnny Depp), who is convinced (unlike others) that Alice is the one who can save Underland from the tyranny of the Red Queen (Helena Bonham Carter) and restore the throne to the rightful White Queen (Anne Hathaway).

It seems to me however that Tim Burton’s Alice is in more ways closer to Dorothy from Wizard of Oz than she is to Caroll’s heroine. Burton’s Alice tumbles into the rabbit hole from Victorian England just like Dorothy flew out of Kansas and landed in the wondrous Land of Oz. Both ladies have friends who help them out and vice versa. They also seek to restore a sense of order in the world they have landed in somewhat unknowingly and are somewhat changed persons when they return to their ‘home’.

Burton manages to create a stunning alternative reality that draws Alice as well as us into it. The painstakingly created Underland might be a far more dystopic world than we live in. But, it is perhaps the insanity that is endearing than the staid and ‘unhappening’ apolitical times of today.

In all likelihood, Tim Burton will get an Oscar nomination as will Depp, who steps into the hat of Mad Hatter as if it was his own. Mia who plays Alice does an endearing job of it and emerges unscathed despite the presence of the talented and eclectic Johnny Depp.

The tight screenplay ensures that you are on the edge of your seat from the first frame itself. And even though it does drift more towards the clichéd side towards the end, it does hold your attention largely because of the implications of the scenes and the quick-witted dialogues.

I could possibly go on about the symbolism in the movie (the most striking of it being the Red Queen and the White Queen obviously referring to communism and capitalism). But I won’t take the fun away and rather you figure it out for yourself. I would however tell you that Tim Burton’s Alice in Wonderland made me stop and think. It brought about the realisation that the one thing most of us lose when as we grow up is, as Mad Hatter would say, our ‘muchness’. It also reminded me that it was certainly good practice to believe in ‘at least six impossible things before breakfast’. But most importantly it told me that the best way to travel is not by train or car but rather by a hat.

Yay! Thumbs Up, by Hindilyrics4u.co.in : It also reminded me that it was certainly good practice to believe in ‘at least six impossible thin

Yay! Thumbs Up, by John Galt : Best ever.

Choice for the Alice was great..and both Mia Wasikowska and Johnny Depp rocks.