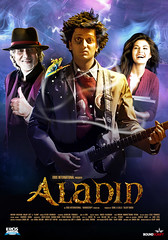 wogma rating: Watch, but no rush (?) - though if you like neat graphics, try the theaters

A fun movie for kids and very likely the accompanying adults will not get bored either. Yeah-yeah-yeah, it's the same ol' story, same ol' chosen one saving the world. But it's done very well visually. If only some more energy was spent on the writing.

You could call it the Hindi Harry Potter 7-crushed into-1 with a dash of X-men thrown in. Or, for that matter, you can look at it as any other super-hero story. BUT, you could also think of Aladin as a huge step forward for Hindi films in terms of graphics and cute imagination - however small it might be.

Don't expect any sort of deviation from the writing department though. Oops! Did I just give the movie away? Oh well, not like you wouldn't guess that in the first 5 minutes. Also, you still don't know how a dim-wit like Aladin (Riteish Deshmukh) manages to keep the evil forces from taking over. There are no fascinating revelations about life and human behavior. There are no aims loftier than power. I don't know about you? But, I thought Aladin was all about adventures, but this is more like a love story.

The first thing that takes you by awe in the first 15-20 minutes or so is the lovely sets. The sand-colored stones, the fortress like look is done really well and you know you are in fairly land with spurts of color showing up on the screen. You are in this town that is more-or-less nameless and is not bound in time. You will see TVs but they have wood-finished remote controls. You have the milkman's cycle and vintage cars.

The other special effects are also fascinating. I wondered if it was just because I was seeing this in a Hindi film. And the answer was a resounding NO! I would have equally appreciated it in a film from any part of the world. The action sequences are smoothly cut and put together. The camera moves lyrically and somehow never gets me out of the story book.

Unfortunately, there's nothing else that's above the average here. I shouldn't be repeating too often that the story is oft-repeated. :) Not only that, it slacks down quite a bit after the first half hour. Also there are jumps in the story that make you feel like you are watching a movie based on a book and they lost 50 pages after every 50 pages. The intriguing suspense in the beginning is not built further and is sorted-out pretty disappointingly.

The acting I guess requires everyone to behave a little over-the-top. I'm not the loud-act-makes-me-laugh audience, so I wouldn't know if the people who like that would enjoy it. I just think it’s a lame excuse in the name of appealing to the kids. We should be developing better tastes in the next generation.

But, given that they are supposed to act loud and larger-than-life Amitabh Bachchan and Sanjay Dutt enchant. We knew they are capable of it, and we see it again. Oh, how my heart sinks in giving a movie starring the Big B a low rating. You want to look only at this 65-year in a screen full of dancers. How he pulls off an entire song and makes elegant, the simplest of choreography … sigh oh well…

Riteish Deshmukh too succeeds, what looks like effortlessly, in playing the larger-than-life idiot! Some of the scenes with two Aladin's on screen (just like that!) make you respect him even more as an actor. Even if those were the only two expressions he could hold. And what's so special about Jacqueline Fernandez, again? Not her chalk-white face with whiter make-up, right?

And those songs get one too many and thus way too often and spoil that for you too!

For those who are not into Hollywood, this one is a must-must-watch! Others could say, "baah! I've seen it in Hollywood - like 100 times over." Or you could watch it like you would watch the next Holly-thriller-action-superhero movie with a typical No-one-can-save-the-world-but-me plotline. And yet, if there were a sequel, I would look forward to it, because all hope's not lost.

Thumbs up, desi hits : ...you almost walk away with an aftertaste of charm overload.... full review

Thumbs up, by Martin D'Souza, Glamsham.com : ...Jacqueline waltzes through her part with the grace of a gazelle. She has the looks and the talent to make a mark... full review

Thumbs up, by Darshit, Movies Music and Me : ...It takes out child from within you. Child who want to dance to peppy tunes of Vishal Shekhar. Music sounds better while watching it on screen. Cause all are situational songs... full review

So-So, by Noyon Jyoti Parasara, AOL INDIA : ...What makes ‘Aladin’ a must watch is the special effects and set designs.... full review

So-So, by Katherine Matthews, Bolly Spice : ...If I have any quibbles with Aladin, they are less to do with the story itself, and more to do with the film's pacing and how the story actually plays itself out... full review

So-So, by Rajeev Masand, IBN Live : ...First-timer Jacqueline Fernandes is easy on the eye and appears confident, but has precious little to do. ... full review

So-So, by Joginder Tuteja, Now Running.com : ... The entire past about Aladin and the Genius gets a little confusing.... full review

So-So, by Kenny Basumatary, Passion for Cinema : ...Jacqueline Fernandes is very beautiful, but – nothing personal – it’ll take at least one more film to see if she’s more than just another assembly line beauty queen... full review

So-So, by Sonia Chopra, Sify Movies : ...Visual effects are arresting and well executed as against the excesses of Saawariya or the clumsy attempts of Drona and Love Story 2050.... full review

Thumbs down, by Nikhil Kumar, Apun Ka Choice : ...But mercy! Even as the film trots to its climax…slam!...a song is squeezed in? ... full review

Thumbs down, by Bobby Sing, Bobby Talks Cinema.com : ...the three wishes are just wasted by Aladin, without any excitement build up or entertainment factor for the viewers. ... full review

Thumbs down, by Taran Adarsh, Bollywood Hungama : ...Wish 2: Producers should act more responsibly. They shouldn't be mere moneybags, but have creative control too;... full review

Thumbs down, by Udita Jhunjhunwala, DNA : ...The mystery, fantasy world is overrun by a juvenile love story.... full review

Thumbs down, by Deepa Garimella, fullhyd.com : ... Amitabh Bachchan is over-eager, but not half as much as his make-up man is. ... full review

Thumbs down, by Kaveree Bamzai, india today : ...neither the mood of the film right nor its momentum.... full review

Thumbs down, by Mihir Fadnavis, india.com : ...Ritesh Deshmukh does all he can but is ultimately forgettable... full review

Thumbs down, by Gaurav Malani, indiatimes : ...Ghosh has a vibrant vision in depicting scenes where the Genie opens doors to Aladin’s dreams.... full review

Thumbs down, Indicine : ...The movie gets too predictable too soon, and just when you gear up for the last action filled battle, the director disappoints you with a lame ending.... full review

Thumbs down, mag4you : ...Riteish fits the character, as envisaged perhaps and because he is so capable of those expressions. But, there's no real imagination in his role.... full review

Thumbs down, by Bryan Durham, MiD DAY : ...Aladin seems like a collage of some interesting scenes put together to make a movie. ... full review

Thumbs down, Movie Talkies : ...that the effects weren't exactly exciting and hence didn't do much to help create a fantasy world. ... full review

Thumbs down, by Anupama Chopra, Now Running.com : ...plot contortions and confusions would hardly matter if Ghosh were able to enchant us. ... full review

Thumbs down, by Ashok Nayak, Now Running.com : ...but soon after Genius makes an appearance, the movie begins to drag.... full review

Thumbs down, by Hanumant Bhansali, Radio Sargam : ...After an impressive start the movie dips with the entry of the Genie.... full review

Thumbs down, by Sukanya Verma, Rediff : ...A spate of songs, after every few minutes, doesn't help either. ... full review

Thumbs down, by Janhvi Patel, StarBoxOffice : ...The city of Khwaish is picturesque. Though it’s near the China border, it has an Indo-European look and vibe because of its lit-up, cobbled streets and domed structures.... full review

Thumbs down, by K K Rai, STARDUST : ...Sahil Khan, who plays the character of Kasim, has enacted his part well. His bullying of Riteish Deshmukh seems convincing... full review

Thumbs down, by The ThirdMan, Upper Stall : ... Take away Amitabh Bachchan and Aladin would collapse like a pack of cards... full review

Thumbs down, by SpiceZee Bureau, Zee News : ...Throughout the film, Amitabh looks like a character, who has had an incomplete make-up session.... full review

Yay! Thumbs Up, by Hindilyrics4u.co.un

Yay! Thumbs Up, by TimELiebe : Amitabh Bachchan and Sanjay Dutt are genies - need I say more? It's big and magical, and really fun.

I know! Big B brings the screen to life even now. And this is when he's made to overact. When he's subtle he's even more amazing!!

Yeah, its a shame not too many people liked the film...oh well...

@TimELiebe naah, i don't think this was the most expensive ever, we've had Krissh and Drona...else, i thought it was an alright film. Maybe even like Riteish Deshmukh better than you did. The kids love this one though!

@TimELiebe uggh...Krissh? really? Well, wogma wasn't around when Krissh released but there you go, you have my review! (and i'm a huge fan of Western Superhero films too!!)

@TimELiebe Aish Rai as wonder woman...more uggh...UNLESS they get a marvelous story and an even better director!