Meta has a certain charm. But the tell-don’t-show climax that is typical of thrillers is a put-off. Even so, it is an interesting watch for how the medium is used.

Whether or not you enjoy the film depends on what you consider the primary theme of the film. As an experimental concept, its meta-take on the vices of the Hindi film industry, its satirical self-references, and its film-within-a-film antics have the potential to keep you hooked—even though it slips and slides every once in a while. As a thriller though, the initial intrigue fades with characters becoming repetitive and beginning to sound like nags—and how the climactic twist is revealed dampens any thrill generated thus far.

You have to remind yourself to not brand both the AKs as arrogant men who are willing to go to extremes to satisfy their hurt egos.

It might be fair to say that the supposed suspense bits take away from the concept. Only when the characters are hamming the same lines or get into over-stretched fist-fights are you forced to snap out of the freshness of the idea. It can be argued that such repetition and elongated fights might be closer to real-life reactions to the situations. But that is incongruous with the bizarre situation that the characters find themselves in. That’s not anywhere close to reality, right?

Why would Anurag Kashyap (AK) kidnap Anil Kapoor’s (AK) daughter? What is the end-game? What is he hoping to achieve when this is all over—a low-budget film out of an elaborate prank? Even if you take in stride that Anurag Kashyap has ‘lost it’, there’s no way he would hurt Sonam Kapoor. Why does he think Anil Kapoor would scurry around? So, you also have to accept that Anil Kapoor believes that Anurag Kashyap is capable of anything, including self-destruction. This bit didn’t sit well with me at all.

Add the shoddy big-reveal and AK vs AK drops several notches. I can’t help but think how much more I would have enjoyed the film if they had skipped the spoon-feeding after the hospital scene. Oh well. While I am at it, the comment on the apathy of selfie-seekers around celebrities felt like a stretch. But then again, I would never know.

Anyway, if how the film ends, didn’t have a way of getting to me, there would be plenty to enjoy in the film. The first ten minutes give context to the uninitiated. They also make for the set-up that justifies the ‘vs’ in the film’s title. One AK wants to teach the other a lesson. 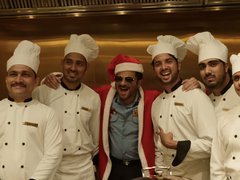 Through an interview panel, Anil Kapoor is introduced as a yesteryear mainstream superstar who is struggling to stay relevant. Anurag Kashyap is a non-mainstream director whose claim to fame is made out to be the abusive language he uses in his films. Both part-true, part not. Which is why the mingling of fact with fiction keeps you thinking. As a 70s child, I know Anil Kapoor was never the superstar he is made out to be, and I know he is relevant today in his own way. As someone who enjoys Anurag Kashyap films, I know they are more than the language he uses. But, who said they are depicting real-life? But, who said they are not real-life, right down to Anil Kapoor’s house and birthday. Doesn’t it sound beautiful? You are smoothly brought in and out of real and reel life.

Maybe because both of them are playing themselves, at least to a large extent, the performances seem effortless. You have to remind yourself to not brand both the AKs as arrogant men who are willing to go to extremes to satisfy their hurt egos.

Repetition and elongated fights might be closer to real-life reactions to the situations. But that is incongruous with the bizarre situation that the characters find themselves in.

Anil Kapoor must surely know his place in the Hindi film history is exaggerated to give weight to the plot. Hopefully, he is not full of himself. His stage dance in the film will find a mention whenever the film is discussed not only because of the antics but also because of how well it portrays a father’s desperation. Anurag Kashyap too must hopefully be less arrogant and deluded about his craft. His performance here is a lot about being in the background and letting Anil Kapoor take centre stage. He even lets Harshvardhan Kapoor’s intentionally annoying cameo carry the frame though he is being adulated.

At the crux, though the story is not really about the actor versus the director or even an actor versus a director. It is about two men who are out to get each other. The actor-director theme is a tool to get the thriller going. Which is why it became more a thriller for me than a cool experiment. Which is why the run-of-the-mill climax killed the off-beat affair for me.

Thumbs up, by Rahul Desai, Film Companion : ...A black comedy it may be for the discerning moviegoer, but a tragedy it remains for the masses.... full review

Thumbs up, by Poulomi Das, FirstPost : ...AK vs AK’s payoff hinges completely on an entire country’s blind obsession with celebrity culture. The ingenuity of it all is that Motwane is that rare filmmaker who understands that when a superstar gets on stage and dances to your tunes, it doesn’t matter if you’re a wide-eyed filmmaker or an eager viewer, you end up being sidetracked.... full review

Thumbs up, by Shubha Shetty, Free Press Journal : ...The film is a fun experience for most parts, except that figuring out the kidnappers’ hideout is not really as thrilling as it is intended to be, and the film gets a bit too indulgent at points. Don’t miss this as this film will take you on a totally unexpected ride.... full review

Thumbs up, by Nairita Mukherjee, india today : ...The music ties the whole chase together, as we drive through the near-empty streets of Mumbai at night with AK and AK.... full review

Thumbs up, by Umesh Punwani, koimoi : ...All said and done, this is will go down as one of the best experiments done with filmmaking in the history of World cinema. Also, it’s not just about its novel concept; it’s about the little things team has managed to pitch in to create this one heck of a film!... full review

Thumbs up, by Rohit Vats, News18.com : ...Kapoor has excelled. It’s funny to even write this because he is playing himself but we don’t know how much of this is not script-bound! Kashyap has once again shown his love for unique material, and he has bared all, sometimes literally. While Harshvardhan Kapoor shines in a cameo, Yogita Bihani also fits the bill.... full review

Thumbs up, by Joginder Tuteja, Planet Bollywood : ...However, all is forgotten with that iconic scene when he is lying all battered on the footpath wondering if him being a star matter at all when his life is indeed in tatters. He could well have taken an inspiration from his first major co-star, Dilip Kumar, from Mashaal. Not just that as the crowd pleasing finale is the icing on the cake that further reaffirms why ‘Anil Kapoor has been a star for 40 years’.... full review

Thumbs up, by Sukanya Verma, Rediff : ...Anil Kapoor's mastery shows in how he finds the space between an actor reaching out to his actuality while remaining an actor while Kashyap's comfort in bullying his co-actor fuels their bickering camaraderie.... full review

Thumbs up, by Vinayak Chakravorty, Sify Movies : ...Good writing is also the reason the actors get to play the field as themselves. The irony is you never quite know in which scene a particular cast member is actually 'acting', and in which they are just being themselves. That sort of a fluidity is Motwane's triumph as a filmmaker.... full review

So-So, by Aishwarya Vasudevan, DNA : ...Talking about the reality, many years back Anurag was set to direct Anil in the film Allwyn Kalicharan back in 2003 which never got made. While attending a film festival, Anil asks Anurag to make a film with him after their first collaboration didn't witness broad daylight. But after nearly two decades, both are in different spaces of life and are not ready to budge their ego for an epic collaboration.... full review

So-So, by Rohan Naahar, Hindustan Times : ...AK vs AK must’ve sounded like a home-run on paper, but it isn’t as tightly constructed as it could’ve been and the twists are somewhat telegraphed. For all its ingenuity, it can’t help but feel like B-material — a dusty old idea spruced up for the streaming age.... full review

So-So, by Shubhra Gupta, indian express : ...Finally, we are left with that eternal question: do actors ever stop acting, even when the cameras stop rolling? At its heart, AK vs AK, feels like a secret fanboy fantasy. Anil is propped up, with yet another ‘Filmfare’ award (this time for the film which is in the film, therefore fictional), and getting to saunter down a corridor, slo-mo, dark glasses in place, every inch a star. The conflict is faux, the hero worship is real.... full review

So-So, by Mayank Shekhar, MiD DAY : ...For instance, an AK (Anurag), who represents resentment and bitterness of having come up the hard way. The other AK (Anil) standing in for the arrogance of a fading elite, in a world that's changed altogether. One AK is showing the other AK his place, literally. Is there more? Well a movie like this is supposed to be conversation starter. Go find your own meta-phor!... full review

So-So, by Srivatsan S, The Hindu : ...Which is why you realise that Anurag Kashyap and Anil Kapoor are not real and are not their real selves, and are playing Motwane’s characters to demonstrate the film’s reality. Subscribe to our First Day First Show newsletter SUBMIT... full review