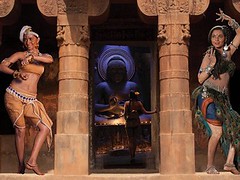 Inspite of some technical merit, Nitin Desai’s directorial debut, Ajintha, offers very little to the viewer as a film, due to some weak writing and direction. The only possible reason to watch it could be its sporadically grand production design, which itself is honestly not a strong enough reason. Avoiding Ajintha will be no loss at all.

Nitin Desai seems to enjoy being the proverbial fish out of the water. Following his acting debut last year, the celebrated art director’s debut feature at the helm, Ajintha, hit theatres this week. Ambitious in scale and vision, Ajintha has technique going for it, but falls way short of being even a halfway decent watch, primarily because of its writing and direction.

The film opens in the jungles of Ajintha, where a Captain James Smith of the British Army, accompanied with a team of tribals, makes an important discovery – caves over two millennia old, containing carvings and paintings depicting the various incarnations of Lord Buddha. Keen on promoting this discovery, the British decide to send a soldier, who also happens to have some skill with the paintbrush, to recreate the paintings and sculptures, so that they can be exhibited and the caves popularized.

Thus, Captain Robert Gill arrives with his easel and canvas to the caves of Ajintha, to create his own version of the masterpieces. With the beauty of his new environment comes Paro, a tribal girl with a sad past, capturing his imagination with her innocence, becoming his muse and the source of his creativity.

There is no denying that the premise of the film had a lot of scope. Unfortunately, an unforgivably incoherent screenplay combined with a rather weak directorial hand causes the result to be clumsy, pointless and boring. The dialogue of the film is especially clunky, with a lot of them unintentionally causing a large section of the audience to guffaw uncontrollably. In fact, there was one large stretch in the middle where the audience made me feel like I was watching Vicky Donor again, even though there was nothing remotely funny going on, on screen.

Nitin Desai’s wish to make this film indulgent and ‘arty’, if there is such a thing, clearly shows - long circular trolley shots around characters to bring forth their mental turmoil; thin lines between dreams and reality where large sets seem to exist one moment and disappear the next; attempts to bathe characters in shafts of light; the works. Ajintha is virtually a case study of the fact that even decades of being a celebrated technician and being associated with some of the best films and filmmakers in the country doesn’t necessarily give you the ability to direct your own film.

If there is someone who brings forth a shred of credibility in the film, it is the young British actor Philip Scott Wallace, who plays Robert Gill. In spite of being saddled with some ungainly English dialogue, he seems to have invested himself into his character of a soldier with artistic leanings, who falls in love with an Indian tribal girl. Sonalee Kulkarni, the actress who plays Paro, is a different matter altogether. Not particularly good with her acting, she doesn’t even come close to looking like what one would imagine a rustic, wild tribal beauty to look like.

The problems with Ajintha, then, are pretty elementary really. The film has no graph, no moments that hook you, no real takeaway. Apart from some well-designed and constructed sets, a few beautiful frames and some intriguing background music, Ajintha has very little going for it for it to make a mark either critically or commercially. This one can safely be given a miss.

Yay! Thumbs Up, by Anuj Kumar Soni : This movie is like a poetry, taking you back in that historical era... Being a non-marathi person, u

Not strictly required, but this isn’t a film for children.

This movie is like a poetry, taking you back in that historical era... Being a non-marathi person, understood and felt every emotion of the film... Brilliant setup and direction... Bringing life to the paintings and sculptures of Ajintha... Like Confucius quoted "a painting is a poem without words"... This movie is a poem filled with every emotion...