An intense set of well-made, well-performed short films. They explore the extent to which humans can go to snatch a share of what they think they deserve, even if it’s a warped sense of justice. A couple films are exploitative because they use shock value.

Almost anyone who has seen Ajeeb Daastaans will have one image flash before their eyes every time they think of the film. That’s good from recall value point-of-view but is an replusive sensation in the spine for the recaller. It could have meant that it was a well-crafted scene. Unfortunately, it stayed with me as shock-for-the-sake-of-shock and thus became a loss in an otherwise well-built up story.

Two other stories too take you aback by what the characters are willing to do to get what they think they deserve. Here, however, if that extra twist was missing it would have made the story ordinary and predictable. So, while the “extra” feels forced it is necessary too. Also, even if it didn’t work for me completely, I appreciated the effort in trying to make it different. After all, they were aiming at making the stories ajeeb, weird, interesting.

The four Ajeeb Daastaans cover a spectrum within each of the many themes—infidelity, revenge, loneliness—to name a few. The first three films also have a running theme of inequality, the resultant power dynamics and how they can be overturned. Maybe because I have a below-average stomach for gore, it felt like they took the “each person is the others’ toy” a bit too far. The theme that stood out for me though was the “odd sense of fairness” that the stories conclude with. The culminations of the situations aren’t wrong, but they aren’t right either. They certainly keep you thinking for a bit.

In the noir lot then, the last film comes as a breath of fresh air--as fresh as is Shefali Chhaya’s presence. She has a pleasantness about her that it washes away a lot of the meanness you have seen so far. Of course, her character is real and charming too. The short stands because of how different it is from the other three films not only because it is warm, but also because it is not ajeeb at all. If you mask the special needs part of the story, it is like any other romantic film. But, it is remarkable that it would still have worked—thanks to the performances, the production values, the music and lyrics, and of course the dialogue.

In fact, performances across the films are on the mark, and some of them interesting. From Fatima Shaikh playing a seductress to the suffering-yet-sure Konkona Sen Sharma you to even Nushrat Bharucha’s uneven attempt to play an underprivileged woman—the acts keep you engaged. Evidently, this noir film revolves around women and that’s refreshing. 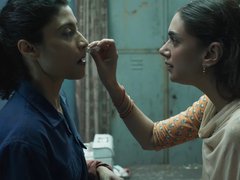 Ajeeb Daastaans is a couple of hours well-spent despite how uncomfortable it tries to make you with the evil thoughts of human beings, if not the gross actions they actually take.

Thumbs up, by Subhash K Jha, Bolly Spice : ...Ajeeb Dastaans has its near-fatal flaws. Some of the twists and turns fail to carry us with them. But the anthology never fails to be interesting even in its absurdest interludes. And Neeraj Ghaywan makes us overlook the cracks and crevices in the other stories. One geeli puchchi for the team.... full review

Thumbs up, by Madhuri V, Filmi Beat : ...Karan Johar redeems his previous failure Ghost Stories with an engaging take on complex human relationships in the form of Ajeeb Daastaans. Despite the bumps at a few places, the Netflix anthology still makes for a compelling watch. Neeraj Ghaywan's Geeli Puchhi and Kayoze Irani's Ankahi are our picks from the lot.... full review

Thumbs up, by Tiasa Bhowal, india today : ...Ajeeb Daastaaans is definitely not a dreary watch and by far the best that the recently released anthologies have to offer.... full review

Thumbs up, by Saibal Chatterjee, NDTV : ...Not all the four stories it tells are as startling as they want to be, but Ajeeb Daastaans is elevated several notches by Ghaywan's subtly stinging short film.... full review

Thumbs up, by Gautaman Bhaskaran, News18.com : ...Finally,Kayoze Irani's Ankahi also has a aluminous cast in a Shefali Shah, who as Natasha plays mother to a deaf-mute daughter and manav koul's Kabir, a deaf-mute artist. Struggling within the confines of a marriage where the man is indifferent to her needs and uncaring towards the girl, Natasha falls in to arms of Kabir, pretending to be deaf-mute as well. the end reminds me of the George Clooney starer , up in the air, where he is rattled find his lover in a totally different avtar.... full review

Thumbs up, by Prateek Sur, Rediff : ...Ajeeb Daastaans is Karan Johar's way of expressing broken and fractured relationships within the milieu of unexplored spaces.... full review

Thumbs up, by Sonia Chopra, Sify Movies : ...While all four stories have an interesting premise, Geeli Pucchi and Ankahi go beyond and get the viewer far more emotionally invested.... full review

So-So, by Rahul Desai, Film Companion : ...A fifty percent success rate for most anthologies is par for the course. But the statistic doesn’t take into account the badness of the misfires versus the greatness of the bullseyes. Thankfully, the sequence of the shorts helps: the two solid segments are third and fourth, leaving the viewer with a sense of hope. If not for the well-performed purpose of Geeli Pucchi, however, Ajeeb Daastaans might have been a considerably diminished metaphor for storytelling.... full review

So-So, by Anupama Chopra, Film Companion : ...The dastaan in Ajeeb Daastaans is plural, which took me back to Abbas Tyrewala’s film Jhootha Hi Sahi in which characters kept describing things as ajeebs. There are plenty of ajeebs here too. But what stayed with me was the expression in Bharti’s eyes in the last shot of Geeli Pucchi.... full review

So-So, by Avinash Lohana, Pinkvilla : ...To sum it up, Ajeeb Daastaans is a mix bag of good and not-so good stories, but it’s attempt is earnest, which definitely deserves a mention. If you are looking for happy endings then this one is not for you, but if you have a taste for hard hitting narratives then you should give this a watch.... full review

So-So, by Sayan Ghosh, The Hindu : ...What essentially started with Bombay Talkies (2013) has evolved into something more adaptable to the present times while still retaining some of its predecessor’s charm. The only thing that is missing is the intent to create something uniquely unconventional, rather than an upgrade on what we have already seen.... full review

So-So, by Priyanka Roy, The Telegraph : ...In the end, Ajeeb Daastaans doesn’t fully live up to its name. Some bits linger, but it’s unlikely you will give a second thought to this anthology once the screen goes blank.... full review

Thumbs down, by Sohini Chakravorty, Free Press Journal : ...While there were many solid performances, the shallowness of the scripts and lazy characterisations made the anthology an uneven watch. It checked all the boxes in its attempt to tackle desire and sexuality, feminism, casteism, class divides, marginalisation and disability, but sacrificed good storytelling at the altar of wokeness.... full review

Dear Meetu, thank you. BEAUTIFUL..
I had seen the movie and wanted to read your review. Absolutely you hit all the nails in the coffin and I had so very similar feelings as expressed by you. Meetu, you have so much matured in your review - YOU may not know or be aware - but as your audience - I reading your reviews since last 13+ years - I simply LOVE the way you write - and would not like to miss a single review from WOGMA written by you. Thanks again.

Raj has given this movie a Yay! Thumbs Up(Different, Good attempt). Raj has posted 99 comments and has rated 67 movies. See Raj's page for more details.
meeta

Glad you enjoyed the review, @Raj. And thank you so much for your kind words and support.