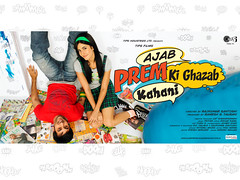 A rom-com that is half-baked comedy and a quarter-baked romance. Does that make it a well-baked film? Unfortunately that's not how the math works. It stays an under-cooked pot that makes you laugh here and there and doesn't get you engaged in its emotion

The on-screen activity had the entire theater in splits! People around me couldn't stop laughing their guts out. So funny did they find the jokes and situations that the gags kept them happy through the unnecessary emotional scenes too. No-no, the audience was chuckling with the characters, not at them. I - well I didn't see the humor through most of the film. Somehow - hit-the-crotch, eunuchs-exist-that's-so-funny, Draupadi-like-undrape-Sari, people-falling-off-stairs, slapping-each-other, modified-cake-fights - don't even make me smile, smirk maybe, but nowhere near the grin-region. However, when I laughed at the other jokes, I laughed real hard.

I don't understand what's so weird or whacky about Prem (Ranbir Kapoor) or about his style of love. Nor do I understand what's so unusual about his story. Not a crime so far, even if you claim those things in the title. The onus of originality is not on you when the entire industry is "referencing." But get there in a way that is wholesome and entertaining.

The sure way of doing that is with some howlarious dialogue, especially when you don't have much in terms of character arcs or story development going on. That they manage in fits and spurts. There is another way to enjoy the do, just pre-decide, you are going to enjoy, and you might too.

The lead pair is another thing that might keep you going. Ranbir Kapoor plays the perfect Prem (Barjatya reference for the uninitiated). Charming and saccharine sweet. He has shades of Sunil, who tries to evoke Prem's darker side. Yes, he's aaawww-cho-chwweet. Diabetics might want to stay away. There's this one sequence in which he does a Jim Cary a lá The Mask and is pretty hilarious too. Now, why he's doing that, don’t ask! And oh yeah, remember slapstick? Yes, Ranbir is loud in this one!

Boys, Katrina Kaif is as lovely, to look at, as ever - even though she's in Sunday-Morning-Mass dresses through the film. Meaning - not much in terms of sensuous skin-show. She doesn't let that affect her performance though. Same ol' accent, same straight face, a similar ol' attempt at shedding glycerin tears.

On the brighter side, there's no first half-second half syndrome here. It is in one continuum - few emotional scenes, a few good laughs, loads of slapstick, and mucho silliness. Oh yeah… and 2-3 songs. The problem is in each of these, you find Santoshi trying to imitate some movie or director. And why not, right? Especially when you can pay tribute to Cinema Paradiso and Maine Pyaar Kiya all in one go! And if not anyone else, there's always an annoying self-reference to bank on. Reminding us of what could have been.

It's Tom and Jerry style humor, alright. But, it doesn't have a quarter of the recall value. And the saddest part is that it's a desperate effort for a repeat performance by Rajkumar Santoshi. And that part is pretty obvious. If only being yourself wasn't that difficult. A wannabe Andaz Apna Apna. And not very successful at that.

Thumbs up, by Noyon Jyoti Parasara, AOL INDIA : ...Its strong point, apart from Ranbir, happens to be its clichéd settings... full review

Thumbs up, by Baradwaj Rangan, Blogical Conclusion, The New Sunday Express : ...here’s so much puckishness in the air, even Katrina seems to have inhaled some of the fairy-dust – the marble-model actually springs to life, coming across as some sort of spry comedienne (or at least a game-enough imitation).... full review

Thumbs up, by Katherine Matthews, Bolly Spice : ...APKGK is a bit like a trip to the fair, where, instead of a ride on the roller-coaster, you settle for one on the merry-go-round.... full review

Thumbs up, by Taran Adarsh, Bollywood Hungama : ...there're times when you feel that the humour looks forced [climax fight especially], but you don't grudge it... full review

Thumbs up, by Daliya Ghose, Bollywood Mantra : ... Music by Pritan keeps the feel and the thrill of the film going. It’s very youthful.... full review

Thumbs up, by Subhash K Jha, IBOS : ...Even while mouthing corny maudlin sappy dialogues about serving moong-dal ke pakaude to his beloved or plucking stars from the sky for her, Ranbir makes the trite seem just right. ... full review

Thumbs up, by Kaveree Bamzai, india today : ...I have to say that it will be Ranbir Kapoor for the next few years. ... full review

Thumbs up, Movie Talkies : ...towards the latter half of the second half, the film seems to have been stretched too long and just about starts to get tiresome.... full review

Thumbs up, by Hanumant Bhansali, Radio Sargam : ...The film has a handful of great scenes that many will enjoy... full review

Thumbs up, real bollywoood : ...One of the biggest contributors of the film is its music by Pritam.... full review

Thumbs up, by Raja Sen, Rediff : ...There's insanity afoot in this film, and this boy makes most of it an absolute treat, glossing over script inconsistency and weaker comedic moments via sheer screen charm alone. Wow.... full review

Thumbs up, by Sonia Chopra, Sify Movies : ...This is Ranbir's show all the way and he carries the film with effortless grace.... full review

Thumbs up, by Pankaj Shukla, SmasHits.com : ...Santoshi can be proud of cracking the best on screen chemistry between Katrina and Ranbeer; the pair looks cool... full review

Thumbs up, by Janhvi Patel, StarBoxOffice : ...Ranbir Kapoor is the star of the film. The guy is effortless; he can do anything, be it romance, comedy or action and make it look convincing.... full review

Thumbs up, by K K Rai, STARDUST : ...Katrina proves with this film that she has moved from her earlier days of being a glam doll and is ready to take on more challenging roles, if given... full review

Thumbs up, by Nova, The World As I See It : ...After a long time, we have a movie that can boast of fresh and clean comedy!!... full review

Thumbs up, by Nikhat Kazmi, Times of India : ...not only Ranbir and Katrina, the rest of the cast is in crackling form too.... full review

So-So, by Amodini, Amodini's Movie Reviews : ...Luminous Katrina, and the youngish Ranbir, ooze beauty and charm in every frame. Even though they have no help from the script, they manage to salvage the film to make it an average entertainer... full review

So-So, by N K Deoshi, Apun Ka Choice : ...adds in a lot of Chaplin flavour to the lead character, but his attempt to evoke sympathy for the self-sacrificing hero isn’t as subtle.... full review

So-So, by Sarita Tanwar, aslibaat.com : ...There clichés in the film are a major dampener ... full review

So-So, Indicine : ...What starts off as a light-hearted romantic movie, turns ugly in the second half with slapstick - Priyadashan style comedy.... full review

So-So, by Anupama Chopra, NDTV : ...The trouble is that the film cannot maintain this tone and energy. So, the humour dips and the gags become forced.... full review

So-So, by Ashok Nayak, Now Running.com : ...APKGK is a let-down in terms of its inconsistent script and moves from being a good romantic tale to a senseless slapstick comedy.... full review

So-So, by The Thirdman, Upper Stall : ...The lead pair looks extremely good together and there's no denying they share quite a likeable chemistry and this certainly helps lift the film a notch or two.... full review

Thumbs down, by Bobby Singh, Bobby Talks Cinema.com : ...the film has got nothing before intermission except the sincere, skillful performance of Ranbir and glamorous looks of Katrina... full review

Thumbs down, by Deepa Garimella, fullhyd.com : ...has plenty of slapstick, and mostly of the kind that can be easily witnessed at your neighbourhood pre-school.... full review

Thumbs down, by Martin D'Souza, Glamsham.com : ...The film swings like a pendulum; at one moment, it takes off and at another, it just drops... full review

Thumbs down, by Mayank Shekhar, Hindustan Times : ...You look through this hollowness, and sense there is not a comic bone at all.... full review

Thumbs down, by Rajeev Masand, IBN Live : ...Nowhere nearly as smart as the director's cult comedy Andaz Apna Apna which relied on a sharp script to deliver its consistently madcap tone, Ajab Prem Ki Ghazab Kahani is erratic in its humour, going from genuinely comic to frustratingly foolish in a matter of minutes. ... full review

Thumbs down, by Gaurav Malani, indiatimes : ...Santoshi makes it ‘loud’ and clear that the flavour of his comedy is slapstick with a comic-strip feel to the storytelling... full review

Thumbs down, by Neha Vishwanathan, Indiequill : ...The result is predictable and about as exciting as watching a toddler add up single digits. ... full review

Thumbs down, by Khalid Mohammed, Passion for Cinema : ...Throughout the gags could have been infinitely more inventive... full review

So-So, by SIMRAN : this movie is nice

Boy, Prem (Ranbir Kapoor) meets Girl, Jenny (Katrina Kaif). One falls in love with the other, the other hasn't a clue. How will the other know? Who will tell? Will anyone tell? What other crisis looms?

Atlast there is someone who thinks that the movie doesnt deserve a 3.5 or 4 star ratings from any angle.

Inviting you to read my take on this at :
http://www.bobbytalkscinema.com/recentpost.php?postid=postid110509171221

I dint like Ranbir when I saw the trailor of this movie, but after I watched the entire film, I started liking him. Katrina, as usual is absolutely gorgeous! I found it to be a ok ok film, especially from the comedy perspective.

Ranbir you are cute than other actors in india.

@TimELiebe I guess I just don't get it! :P that Golmaal humor...