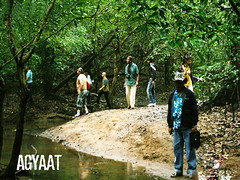 wogma rating: Add to 'must watch' list (?) - Only for thriller buffs who don't mind absense of substantial story

Weird camera angles used wisely, wish background score was used miserly. Nevertheless, the pace and visuals used are well placed to thrill and create curiosity. Alas, the climax is pretty predictable and that takes away a lot from the enjoyment of the film.

One could easily get away with saying that Agyaat has no 'real' story. And they wouldn't be entirely wrong. The one-line description and the detailed description would pretty much be the same. But as the drama in the post-interval 45 minutes unfolds the film shows the struggle of a human being. A struggle between his natural instinct to become an animal for his survival and his persistence in trying to keep himself from turning into a beast. And this is what sets the film apart and keeps it from becoming one big yawn-fest.

Also some of the jerks - the kind in a horror film that jolt up in your seat - are done pretty well. Of course, there are other times when all you see is the camera following the subject or being followed by the face of the subject. This though is used in limitation and saves the film from becoming a tiring watch.

At last I found the use of nauseating camera angles in an RGV film justifiable. The spookiness he tries to create this time works at least in bits - more so in the second half. Pre-halfway the film is pretty much blah. Nothing much goes on in the story other than set-up of characters. Also there is enough evidence of RGV going bonkers in post-production, especially in the sound department. And yet I wanted the cackling in the audience to stop - I understand it is inevitable when horror is on screen and yet I wanted them to give the film a chance. Also the cliff-hanger at interval shakes you out of the drowsiness immediately.

Even until half-time the use of camera will interest people who like observing the technical aspects of film-making. Very smartly the film also gives us a peek into the hardships that the actual crew might have gone through while shooting Agyaat. it felt like you were watching Sri Lanka on the "Animal Planet" channel - with some exotic snakes being covered from close quarters. I'm fascinated by flora and fauna so seeing snakes on big screen really excites me. Though the inherent beauty of Sri Lankan jungles doesn't leave much room for creativity, an eerie atmosphere is created. Despite the loud background score's best effort to keep you from being horrified.

Not only the music in the background, but the songs are also very obviously fit in the script for pure commercial purposes. Please tell me a skimpily-undressed Nisha Priyanka Kothari is not all it takes to make a film a financial success. Anyway, she does the usual stuff a lead lady is required to do in a "horror" film - yell and feel scared - and does it well. That is pretty much what the rest of the cast does too. Like a gym workout. Make the expression required of your character. "hold-Hold-HOLD AND pulse-Pulse-PULSE AND 8 - 7 - - 4 - " you get the drift. Right.

Also a couple of characters have irritating traits that make them caricatures. Though a lot of grace marks for keeping dialogue as minimal as possible given it’s a commercial project. Despite that there are a couple of scenes which could have used better dialogues instead of run-down repetition or predictability.

I'd have liked a subtle hint of ambient noise to prevail as background sound. I want to know what it feels like in an RGV product. I know Agyaat had more potential to terrify than just this. It created neither warmth for nor curiosity about the characters. But I wanted to know more about the unknown. And that is what makes the end absolutely predictable. Oh well...if RGV could try different tactics to stun, he wouldn't be RGV, right?

Thumbs up, by Taran Adarsh, Bollywood Hungama : ...Every actor in the film makes an impression, but Ishteyak, Kali Prasad Mukherjee and Rasika Duggal stand out. ... full review

Thumbs up, by Gohar Iqbal Punn, Radio Sargam : ...Screenplay is well written that keeps you interest level alive all through. ... full review

So-So, by Chanda Gohrani, AOL INDIA : ...Ramu tries to push his luck and humour a little too far. The movie ends in a rather questionable manner, finishing all the thrill and fear that it could have created in people’s minds.... full review

So-So, by Daliya Ghose, Bollywood Mantra : ... If not first grade but some instances of Agyaat are praiseworthy.... full review

So-So, by Rajeev Masand, IBN Live : ...Varma taps into that fear to the fullest, and banks on the expressions of the characters to convey just what they've got themselves into.... full review

So-So, by Subhash K Jha, Now Running.com : ...The repressed spotboy's outburst against the spoilt superstar played by Gautam Rode, every inch the despicable brat, is a masterly manoeuvre designed to show how fear melts all class differences. ... full review

Thumbs down, by Khalid Mohamed, aslibaat.com : ...all Varma sir now gives you is a heroine of sorts breaking into turn-on yoga ... full review

Thumbs down, by Roshni Mulchandani, Bolly Spice : ...The supporting actors provide a tad bit of solace to the film but for the most part everyone looks lost in the film and the jungle.... full review

Thumbs down, by Anand Vaishnav, Buzz18 : ...Varma continues his fixation with making her do aerobics on screen. So there's enough screen time devoted to her arms, thighs, abs and so on.... full review

Thumbs down, by Aniruddha Guha, DNA : ...It's been a while since you've seen a good comedy film and this one could fill in that gap.... full review

Thumbs down, by Gaurav Malani, indiatimes : ...The lack of sane performances is substituted by Mr. Camera and Mrs. Background music.... full review

Thumbs down, Movie Talkies : ...The songs seem to be just thrust into the movie meaninglessly, and there is also a remake of the popular song 'kahi deep jale kahi dil' in the most tasteless manner.... full review

Thumbs down, by Aditya Savnal, Passion for Cinema : ...The D.O.P does a nice of job of creating an eerie jungle feel but nowhere do you feel like it’s shot in Sri lanka. ... full review

Thumbs down, by Great Bong, Random Thoughts of a Demented Mind : ...through petrifying sound effects like “Boooooooo” “Wooooooooo” RGV displays the supreme control of his faculties that have characterized his movies of late.... full review

Thumbs down, by Chandrima Pal, Rediff : ...You want to see how a director gets to bastardise a classic scarefest such as the Predator, and have the gumption to promote it the way he did.... full review

Thumbs down, by Aalekh Kapoor, StarBoxOffice : ...Nitin Reddy hardly gets any time to perform in his Bollywood debut... full review

Thumbs down, by Anupama Chopra, The Asian Age : ...All Varma had to do was copy but apparently even that was too much of a challenge. Agyaat is relentlessly foolish. ... full review

Thumbs down, by Nikhat Kazmi, Times of India : ...it takes more than the rustle of the leaves, the growl of the night creatures and the howl of a beast to scare the die-hard film buff... full review

Thumbs down, by The ThirdMan, Upper Stall : ...Technically, barring some admittedly dynamic compositions which sadly fall flat due to the non-existent storyline, there is nothing worth shouting about... full review

Yay! Thumbs Up, by forexmegadroid : Hey, very informative and interesting.

Yay! Thumbs Up, by nologareng : This section lists things that I think are not important to the overall impact of the movie. In most

Yay! Thumbs Up, by Plumber Northampton : It was an excellent movie.

Yay! Thumbs Up, by Rod

A flim's crew is out to shoot in the interiors of a Sri Lankan jungle. But all is not as pretty as it looks. What makes it ugly?

I've been following Varma's films closely since quite a while. Although I'm no more a fan, I'm always curious to know how his film's shaped up. Was really surprised when UTV decided to produce this film - they had some great films last year - Oye Lucky Lucky Oye, Aamir, DevD, Welcome to Sajjanpur, Jodha Akbar - I'm guessing this film will disrupt that run of success.

But frankly, I'm kinda bored of the fish-eye lens camera angles that Agyaat's promos are full of. They seem to have become Bollywood's easiest way out to depict horror, thrill or suspense.

I am surprised you have given 2.5 for a the story where u mention "The one-line description and the detailed description would pretty much be the same."
If that is the case then there is absolutely no material for the screenplay for which you have rated 3.5
For a movie that you call bad, with lots of gimmicky camera work and loud sound design you have rated direction as 3.5

what am i supposed to make of this review? Personally reviewing/Opinions need to be concrete, it should say if it's worth the ticket price, this review swings both side. I find few reviews online that reviews movies as a complete experience, prefer reviewers did not break a film into elements, it appears Critics could be better film makers, if given a chance to make a film.

Hated the movie. 1-star from my side.

@Arcopol Yes, I find myself entering into the theater with a whole baggage of cynicism if it has RGV associated with it in any capacity. But this one doesn't use the fish-eye lens as much. There are lots of variety in shot taking - this came as a pleasant surprise to me.

@Manu Warrier I understand your issue with the detailed ratings. It was a tough call - usually is when the films are - okay, good in some depts and not-so-good in others. Let me try and explain this one - just because the story is a one-liner doesn't make it a bad story, the concept and build-up is really good, the climax disappointed in comparison to the build-up. Thus the 2.5 to the story.

Given the story, screenplay for me means how one scene follows the other, the pace of the film, the details. And that was done pretty well. Screenplay in a way once rated doesn't necessarily co-relate to story as it relates to direction.

I didn't call the camerawork gimmickry, I infact said that I was surprised to see a good use of the equipment to create an atmosphere of horror. In fact, the visuals were good despite the sound design. Moreover, I felt the director's aim was to make the viewer curious about "The Unknown" which it managed to do post interval and until 10 minutes before the end. That I think is the director's success.

With that I shall pass the ball on to you.

Thanks for dropping by and leaving your thoughts!