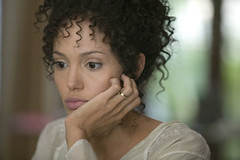 Based on Marianne Pearl’s book of the same name, A Mighty Heart focuses on the events surrounding the immediate aftermath of the kidnapping of Pearl’s husband, fellow-journalist and Wall Street Journal reporter Daniel Pearl (played by Dan Futterman).

When he went missing, Daniel was in Karachi – where most of the film is set – to investigate extremist links to British national Richard Reid, the infamous failed ‘shoe bomber’, jihadist and Guantanamo detainee.

The film essentially documents the combined attempts of the Pakistani security forces, US intelligence services, Daniel’s colleagues and Marianne herself to find Daniel and has captors.

Marianne (played by Angelina Jolie) is unwilling to be a victim of circumstance: she is proactive, passionate and fiery as she attempts to unravel the tangled web of contacts, fixers and middlemen in the quest to locate her husband.

Director Michael Winterbottom faces a challenge, which he deals with admirably: to combine both reconstruction and dramatisation. For the former, Winterbottom uses several techniques giving the film a ‘fly on the wall’ documentary quality, such as heavy use of handheld camera shots, along with datelines and interspersed contemporary news footage. For the latter, he keeps up the tempo through the editing – quick cuts between shots, jump cuts and pacy visuals. The combination of documentary style visuals and action thriller pacing is definitely in vogue right now – The Bourne Ultimatum stands as a prime example.

Anurag Kashyap also had a crack with Black Friday, but A Mighty Heart succeeds where Black Friday ultimately failed. Whereas many of the sequences in Black Friday would have worked as dramatisations within a documentary, as a film it fell down because of the lack of genuine characterisation or cohesive narrative.

A Mighty Heart manages to pull this off. This is definitely Marianne’s story – not Daniel’s – and we’re firmly placed in her shoes throughout. Winterbottom resists the temptation either to dramatise or speculate about Daniel Pearl’s incarceration itself. Following Daniel’s disappearance, the emphasis is firmly on Marianne’s desperate search, and we see him only in flashbacks or photographs. Just like Marianne, we have to learn the truth piece by piece as the story unfolds.

As with Black Friday and Steven Spielberg’s Munich, A Mighty Heart avoids over-simplistic cartoonish characterisations of the ‘bad guys’. This adds to the realism; even jihadists have families too.

Much has been said about Jolie’s portrayal of Marianne. Is she the right actress for the part? To be fair, Jolie deserves credit for her performance. She puts in a strong emotional turn in an undoubtedly challenging role, and is certainly less irritating than usual. Without her influence (and that of her husband, co-producer Brad Pitt) it’s unlikely that the film would have been made in the first place.

Although Jolie is the star name, the film benefits from balanced and understated performances from across the cast. In particular, the ever-reliable Irrfan Khan is excellent as Captain, the Pakistani CID officer leading the investigation. Futterman has relatively little screen time, but convinces, as does Archie Panjabi as Marianne’s friend and hostess Asra – who as an Indian in Pakistan faces problems of her own.

Winterbottom occasionally lapses into cliché – is it possible to signify a new day in Pakistan without panning across a hazy dawn skyline accompanied by the cry of the muezzin? It seems not. As soon as we leave the haven of Asra’s lavish Karachi bungalow we’re pitched immediately into the apparent chaos of downtown Karachi. Yet while Karachi’s traffic might seem threatening to many – and is presumably used as a device to unsettle the audience – it would not faze Daniel Pearl, an experienced journalist who lived and worked in Bombay.

As an adaptation of a non-fiction book, A Mighty Heart may not have the luxury of a conventional plot. However, the film demonstrates that with care and attention to detail it is possible to produce an intelligent, thought-provoking dramatisation without resorting to sensationalist flourishes. Fittingly, like Marianne and Daniel, A Mighty Heart has dignity.

Nay! Thumbs Down, by Lance