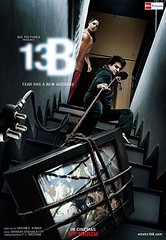 The concept of a TV haunting you is truly spooky but it is introduced in such a laidback fashion that you lose interest within the first twenty minutes. And later when the chills do begin it is too little too late.

NOT A REVIEW - Just wondering if this one will retain my dislike for horror by making my insides squirm or will it like most other "horror" stories make me laugh unintentionally...

Another movie that promises to be different. Not just because the makers claim so but the promos and plot do offer hope.

Like a lot of human lives, the movie revolves around TV. And what if, one fine day, the TV takes over control replicating your control over the remote? Spooky.

The promos do have the standard - hurling humans, shattering objects, squeaky knives on wood sounds, hooded dude and all that jazz. I can also imagine the Psycho-delic violent violin strumming with the camera walking as if the one holding it is the murderer. It's what will come after and beyond that, which might chill.

One fine day he [Vikram K Kumar] saw a news bulletin, where television sets distributed by a politician resulted in his winning the elections.

I'm looking forward to seeing Poonam Dhillon on screen, more out of nostalgia than anything else. And maybe this time Neetu Chandra will have a little bit of a meat to her role for us to get a glimpse of her 'talent'. And of course, I've always looked out for work by R. Madhavan from his Banegi Apni Baat days. Ahem!

Alas, he's done only 7-8 Hindi films only because of lack of interesting plots -

I would be doing gross injustice to my (Tamil) producers if I play second or third lead in Hindi films because I get to play solo leads there. Plus, the stories and concepts I work in give me ample scope to exhibit my talent. I wouldn't mind Hindi films if I came across exciting scripts.

13B is one of the very few Hindi films with him in the lead. And it is being made in Tamil too. Though he seems to have been totally gripped by it, his reaction amused me.

...when he [Vikram K Kumar] finished narrating the first half, I literally took a fruit knife and said to him if you don't finish the story like the first half is, I will kill you. So he said no, no let me tell you the second half and sure enough it was not as good as the first half, but I said it's just phenomenal and never been done before so lets sit and work on it...

And work on it, they supposedly did. Whether it was good enough, we'll know soon enough.

Meanwhile, the promotional song 'sexy mama' got into trouble because of ... yep, you got that right ... the word 'sexy'. The most hilarious bit is that the Tamil promo got a more liberal rating AND they got to keep the word while the Hindi one got an 'A' (Adult) rating and the word had to be changed.

What amuses me even better is that now I know that the word 'sexy' was used even before seeing the movie or its promos. Otherwise, I wouldn't even know. And this whole certification bit will only create more buzz around the movie.

Anyway, the promo song fulfills all requirements of its nomenclature. Cheesy and irrelevant lyrics, generic music, bikini-clad women, and the protagonist acting completely out of character. Yeah you sort-of can tell even without having seen the movie - compare the song to the trailers. Here you go -

The official site interestingly has had over 5 million hits already. That is quite some achievement. True, the site loads really fast compared to other movie sites. And it also has a list of creepy stories. The kind you could potentially use around a campfire on a dark night out with friends.

For now, let's see how this story works out in a dark theater.

It's nice to know you have company for your sentiment towards the movie, right? I've never fancied horror too much. But while watching 13B I was wondering what I dislike more - the squirms when the movie is done well or the annoying 'typical' camerawork and background score which make it unintentionally funny. Some of these standard techniques were just too in the face and obviously annoying.

That the movie took a turn for the better in the latter half didn't help much, because by then the enthusiasm of watching the movie had worn off. And since the TV is doing the haunting and making accurate forecasts, you end up seeing everything twice - once in the TV prediction and then in the movie. And sometimes the makers feel obliged to repeat a dialogue or two even after the first repetition. And if not that, then the TV was spoon-feeding us just in case we missed the point that real life was replicating reel life. Not to mention that the appliances taking over life bit is rubbed in till you are just about to begin tearing your hair apart.

And why is there such a lack of creativity in trying to horrify us? When was the last time violins rising up to a crescendo didn't bring snickers and eye-rolls? I was craving a normal, straight, non-close-up shot. Some bits are so slow that the director without a doubt knew that the audience would know what is about to happen. Then, why would he do that? And am I the only one bothered when 'the unknown entity' is obsessed with the house address without any rhyme or reason?

Madhavan though does a good job of portraying Manohar's anger, his frustration, his vulnerability. The rest of the cast is just about ok.

A potentially scary concept was completely messed up. But, just imagine this. All the soap operas on television - what if our real life starts replicating them. Or we believe that our lives are replicating them and they become self-fulfilling prophecies. Now, that's what I call horror!

Thumbs up, bigoye.com : ...Director Vikram K Kumar’s first commercial attempt of pulling off a suspense thriller is worth an applaud... full review

Thumbs up, by Roshni Mulchandani, Bolly Spice : ...Kumar has succeeded to entertain however not scare as much.... full review

Thumbs up, by Anand Vaishnav, Buzz18 : ...In the initial reels of 13B, influences of RGV's Bhoot are pretty evident in his shot taking.... full review

Thumbs up, Full2 Faltu : ...The story and the plot are gripping and thankfully does not have the godmen’s mantra tantra to solve the ghost problem.... full review

Thumbs up, M TV : ...It's a clever but scary satire on how seriously we tend to take the on screen lives of the TV actors... full review

Thumbs up, by Meena Iyer, Mumbai Mirror : ...For those who enjoy their thrills and chills, 13 B may just be your destination.... full review

Thumbs up, by Anupama Chopra, NDTV : ...There aren’t any genuinely frightening moments but Kumar bungs in enough creepiness to keep you guessing and waiting.... full review

Thumbs up, by Ashok Nayak, Now Running.com : ... It has a strong thrilling story with tension filled horrific elements brewing through the veins for most of its runtime... full review

Thumbs up, by Tushar, Passion for Cinema : ...13 B is not just a rivetingly told spooky tale but explores its characters and symbols as allegories that etch out a larger picture.... full review

Thumbs up, by Sethumadhavan, Passion for Cinema : ...The movie for once does not have the typical blood & gore associated with Indian movies of this genre & is more of something which plays on your mind.... full review

Thumbs up, by Nikhat Kazmi, Times of India : ... Now this one's a neat little goosebump that keeps the chill factor on simmer, both in terms of content and charisma... full review

So-So, by Aparajita Ghosh, Apun Ka Choice : ...It doesn’t spook the daylights out of you, but it is chilling in parts.... full review

So-So, by Priyanka Pulla, fullhyd.com : ...While 13B it is not brilliant or original fare, what makes it passable is that it doesn't try to be one.... full review

So-So, by Shashi Baliga, Hindustan Times : ...If you like horror films, this one’s par for the course, especially in the first half,... full review

So-So, by Rajeev Masand, IBN Live : ...13B sucks you into its drama because it's set in an urban, middle-class neighborhood, and is treated like the ki... full review

So-So, by Taran Adarsh, IndiaFM : ...13B involves you in the proceedings and most importantly, scares you as well.... full review

So-So, by Elvis D'Silva, Rediff : ...From the sound design to the performances to some of the camerawork, 13B plays like bad late night television or graduate school theatre.... full review

So-So, SmasHits.com : ...The movie is worth a watch because of its good cast but fails in connecting the plot with nothing but horror.... full review

So-So, by Janhvi Patel, StarBoxOffice : ...13B is scary. Goosebumps are guaranteed along the ride.... full review

Thumbs down, Movie Talkies : ...13B has an interesting premise and towards the climax it does manage to pick up pace.... full review

Thumbs down, by Goher Iqbal Punn, Radio Sargam : ...‘13B’ without any doubt scare you too since the idea is novel and the camera work aptly sends horror inside you... full review

Thumbs down, by Sonia Chopra, Sify Movies : ...irector Vikram K. Kumar takes too many things for granted and the dots don’t connect to form a cohesive picture.... full review

Yay! Thumbs Up, by divorce advice

So-So, by Lyricswale.com : Good one. The story line is a bit weak banging the story connecting it to some past events happened

So-So, by Telugulyrics.co.in : Madhavan though does a good job of portraying Manohar's anger, his frustration, his vulnerability. T

Nay! Thumbs Down, by articles written

Nay! Thumbs Down, by Enjoylyrics.com : potentially scary concept was completely messed up. But, just imagine this. All the soap operas on

Nay! Thumbs Down, by Hindilyrics4u.co.in : the movie took a turn for the better in the latter half didn't help much, because by then the enthu

Nay! Thumbs Down, by Tamillyrics.co.in : So much for original story. It's a repackaging of Spielberg's Poltergeist with "Saas be kabhi Bahu t

The More family moves into a new house. Manohar (Madhavan) notices that all appliances are behaving strangely and begins to get worried.

It's a very nice movie...a new theme for the movie which encouraged to pull the audience.